The Partial-Birth Abortion Ban Act of 2003 (Pub.L. 108-105, 117 Stat. 1201, enacted November 5, 2003, 18 U.S.C. § 1531,[1] PBA Ban) is a United States law prohibiting a form of late-term abortion that the Act calls "partial-birth abortion", often referred to in medical literature as intact dilation and extraction.[2] Under this law, "Any physician who, in or affecting interstate or foreign commerce, knowingly performs a partial-birth abortion and thereby kills a human fetus shall be fined under this title or imprisoned not more than 2 years, or both." The law was enacted in 2003, and in 2007 its constitutionality was upheld by the U.S. Supreme Court, in the case of Gonzales v. Carhart.

This statute prohibits a method of abortion in the United States that it names "partial birth abortion". The procedure described in the statute is usually used in the second trimester,[3] from 15 to 26 weeks, some of which occur before and some of which occur after viability. The law itself contains no reference to gestational age or viability. The present statute is directed only at a method of abortion, rather than at preventing any woman from obtaining an abortion.[4]

Despite its finding that "partial-birth abortion ... is ... unnecessary to preserve the health of the mother", the statute includes the following provision:

Hadley Arkes commented, in an editorial in the National Review, "[t]hat provision went even further than the law was obliged to go, for as the American Medical Association testified during the hearings, a partial-birth abortion bore no relevance to any measure needed to advance the health of any woman."[5]

Citing the Supreme Court case of Doe v. Bolton, some pro-life supporters have asserted that the word "health" would render any legal restriction meaningless, because of the broad and vague interpretation of "health".[6] This was of particular concern when it came to anticipated arguments that such a definition would encompass "mental health", which some thought would inevitably be expanded by court decisions to include the prevention of depression or other non-physical conditions. Pro-choice groups object to this statute primarily because there is no exemption if the health of a woman is at risk.[7]

In the 2000 Supreme Court case of Stenberg v. Carhart, a Nebraska law banning "partial-birth abortion" was ruled unconstitutional, in part because the language defining "partial-birth abortion" was deemed vague.[9] In 2006, the Supreme Court in Gonzales v. Carhart found that the 2003 act "departs in material ways" from the Nebraska law and that it pertains only to a specific abortion procedure, intact dilation and extraction.[2] Some commentators have noted that the Partial-Birth Abortion Ban Act's language was carefully crafted to take into account previous rulings.[10] Although in most cases the procedure legally defined as "partial birth abortion" would be medically defined as "intact dilation and extraction", these overlapping terms do not always coincide. For example, the IDX procedure may be used to remove a deceased fetus (e.g. due to a miscarriage or feticide) that is developed enough to require dilation of the cervix for its extraction.[11] Removing a dead fetus does not meet the federal legal definition of "partial-birth abortion," which specifies that partial live delivery must precede "the overt act, other than completion of delivery, that kills the partially delivered living fetus."[12] Additionally, a doctor may extract a fetus past the navel and then "disarticulate at the neck", which could fall within the terms of the statute even though it would not result in an intact body and therefore would not be an intact dilation and extraction.[13] 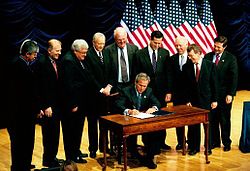 The only substantive difference between the House and Senate versions was the Harkin Amendment expressing support for Roe v. Wade.[17] A House-Senate conference committee deleted the Harkin Amendment, which therefore is absent from the final legislation.[1] On November 5, 2003, after being passed by both the House and the Senate, the bill was signed by President George W. Bush to become law.

The constitutionality of the law was challenged immediately after the signing. Three different U.S. district courts declared the law unconstitutional.[18][19][20] All three cited the law's omission of an exception for the health of the woman (as opposed to the life of the woman), and all three decisions cited precedent set by Roe v. Wade (1973) and Stenberg v. Carhart (2000). The federal government appealed the district court rulings, which were then affirmed by three courts of appeals.[21][22][23] The Supreme Court agreed to hear the Carhart case on February 21, 2006,[24] and agreed to hear the companion Planned Parenthood case on June 19, 2006.[25]

On April 18, 2007 the Supreme Court in a 5-4 decision, Gonzales v. Carhart, held that the statute does not violate the Constitution. Justice Anthony Kennedy wrote for the majority which included Justices Samuel Alito, Clarence Thomas, Antonin Scalia, and Chief Justice John Roberts. Justice Ruth Bader Ginsburg wrote the dissent which was joined by Stephen Breyer, David Souter, and John Paul Stevens.[26] Kennedy's majority opinion argued that the case differed from Stenberg v. Carhart, a 2000 case in which the Supreme Court struck down a state ban on "partial-birth abortion" as unconstitutional, in that the Partial Birth Abortion Act defined the banned procedure more clearly. In dissent, Ginsburg argued that the decision departed from established abortion jurisprudence, and that lack of a health exception "jeopardizes women’s health and places doctors in an untenable position." The replacement of O'Connor by Alito was identified as a key difference between the 5-4 decision against the Nebraska law in Stenberg and the 5-4 support for the abortion ban in Gonzalez.[27]

A Rasmussen Reports poll 4 days after the court's decision found that 40% of respondents "knew the ruling allowed states to place some restrictions on specific abortion procedures." Of those who knew of the decision, 56% agreed with the decision and 32% were opposed.[28] An ABC poll from 2003 found that 62% of respondents thought "partial-birth abortion" should be illegal; a similar number of respondents wanted an exception "if it would prevent a serious threat to the woman's health." Additional polls from 2003 found between 47–70% in favor of banning partial-birth abortions and between 25–40% opposed.[29]

A 2007 article in The Boston Globe reported that, in response to this statute, many abortion providers had adopted the practice of injecting the fetus with lethal drugs before all late-term abortions. Typically, a concentrated salt solution is injected directly into the fetal heart using ultrasound to guide the needle. Even though these providers do not perform intact dilation and extraction procedures, they feel the broad wording of the ban compels them "to do all they can to protect themselves and their staff from the possibility of being accused."[30]