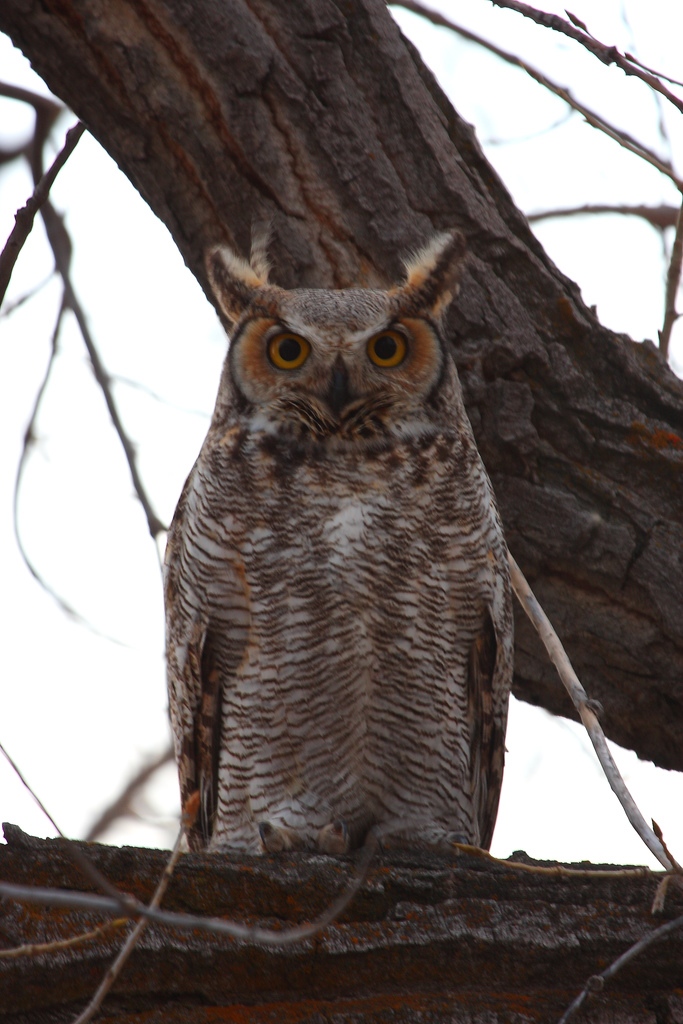 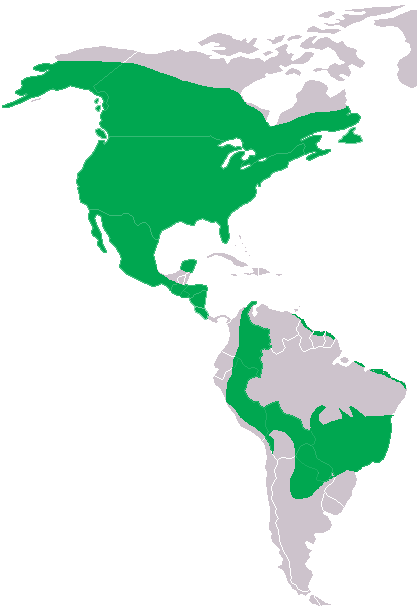 range_map_width = 204px
range_map_caption = Distribution
subdivision_ranks =
subdivision = see text
synonyms ="Strix virginiana" Gmelin, 1788 The Great Horned Owl, "Bubo virginianus", is a large owl native to North and South America. It is an adaptable bird with a vast range, though it is not as widespread as the .

The breeding habitat of the Great Horned Owl extends almost throughout both and . Within their habitat they can take up residence in trees that include , , and mixed forests, s, s, , ous areas, s, subarctic , rocky coasts, s, and some s. Though less common in the more extreme areas (i.e. the heart of the s, extremely dense s) and missing from the high , they are found in most habitats.

Individuals range in length from 46 to 68 cm (18 to 27 inches) and have a wingspan of 101 to 153 cm (40 to 60.5 inches). An average Great Horned Owl is 55 cm (22 inches) long, has a wingspan of 124 cm (49 inches) and weighs about 1400 grams (3.1 lbs). Generally, the largest owls are found closer to the s and the smallest owls are found closer to the . Females are larger than males. Adults have large ear tufts, a reddish, brown or gray face and a white patch on the throat. The iris is yellow, except in the race "B. v. nacurutu" where it is amber. The ear tufts are not actually ears, but simply tufts of feathers. The underparts are light with brown barring; the upper parts are mottled brown. The legs and feet are covered in s up to the talons. There are individual and regional variations in color; birds from the sub- are a washed-out, light-buff color, while those from can be a dark chocolate brown. Owls also have spectacular binocular vision needed to pinpoint prey and see in low light. Owls cannot move their eyes as humans can. They are locked in a special circular bone. Therefore, their neck must be able to turn a full 270 degrees in order to see in other directions without moving its entire body. An owl's hearing is as good — if not better — than its vision. Owls have stereo hearing that allows them to find the exact location of their prey. These birds also have 500 pounds per square inch of crushing power in their talons. A normal man has about 60 pounds per square inch in his hands. Fact|date=May 2008

Great Horned Owls are some of the earliest-breeding birds in . They breed in late January or early February and are often heard calling to each other in the fall, starting in October. They choose a mate by December and are often heard duetting before this time. For owls found in more tropical climates, the dates of the breeding season are somewhat undefined. They often take over a nest used by some other large bird, sometimes adding feathers to line the nest but usually not much more. Old , , and large nests are often favored in North America. However, they are far from dependent on the old nests of others and may use cavities in trees and snags, cliffs, deserted buildings, and artificial platforms.

There are usually 2 eggs per clutch, with a clutch ranging in size from 1 to 5 eggs (5 is very rare). The average egg breadth is 46.5 mm (1.8 inches), the average length is 55.2 mm (2.2 inches) and the average weight is 51 grams (1.8 oz). The incubation period ranges from 30 to 37 days, averaging 33 days. Brooding is almost continuous until the offspring are about 2 weeks old, after which it decreases. Young owls move onto nearby branches at 6 weeks and start to fly about a week later. The offspring have still been seen begging for food in late October (5 months after leaving the nest) and most do not separate from their parents until right before they start to reproduce for the next clutch (usually December). Birds may not breed for another year or two, and are often vagrants ("floaters") until they establish their own territories. All adult Great Horned Owls are permanent residents of their territories. Eggs, nestlings and fledgings may be preyed on by es, s, wild or feral s. There are almost no predators of adults, but they may be killed in confrontations with s, s and, mostly, other Great Horned Owls, which may end in the eating of the dead owl.

The birds hunt at night by waiting on a high perch and swooping down on prey. Prey is quite variable, but is predominantly small to medium-sized s such as s, , mice, moles, , s, s, s, s, s, s and even s. Locally, s and s can comprise a great majority of subsistence for Great Horned Owls. Birds comprise the other large portion of Great Horned Owl prey, with birds ranging in size from s to s being taken. Locally, waterbirds, especially s and s, can be important prey; raptors up to the size of s are sometimes taken. s, s, , s and even s are occasional prey. In northern regions, where larger prey that cannot be eaten quickly are most prevalent, they may let uneaten food freeze and then thaw it out later using their own body heat. They also tend to eat and regurgitate food in the same locations.

They have excellent hearing and exceptional vision in low light. Their hearing has better depth perception than human hearing Fact|date=April 2008 and better perception of sound elevation (up-down direction). The latter is possible because owl ears are not placed in the same position on either side of their head: the right ear is typically set higher in the skull and at a slightly different angle. By tilting or turning its head until the sound is the same in each ear, an owl can pinpoint both the horizontal and vertical direction of a sound. The eyes of Great Horned Owls are also nearly as large as those of humans and are immobile within their sockets. Instead of turning their eyes, they turn their heads.

Their call is a low-pitched but loud "ho-ho-hoo hoo hoo." Sometimes it is only four syllables instead of five. The female's call is higher and rises in pitch at the end of the call. Young owls make hissing or screeching sounds that are often confused with the calls of s. The male owl's call is often used in Hollywood movies, no matter what kind of owl is being depicted on screen (in a manner similar to the cry of the ). The Great Horned Owl is the provincial bird of . Great Horned Owls can be easily confused with "Bubo magellanicus", the (which was for some time believed to belong in this ), and other s.

A large number of have been named. As indicated above, many of these are only examples of individual or clinal variation. Subspecies differences are mainly in color and size and generally follow Gloger's and s.

* "B. v. nacurutu" (Vieillot, 1817): :A lowland form occurring in disjunct populations from from E Colombia to the Guyanas; also from and south of the basin to N ; resident all-year. Includes the proposed subspecies "scotinus", "elutus", and "deserti" (Holt "et al." 1999). The status of this form, especially the relationships between the subpopulations and with ssp. "nigrescens" and the , deserves more study.:Dull brownish with long bill; birds from the semiarid interior of Brazil often have much white on uppertail- and ear-coverts. It is the only subspecies where the iris is amber, not yellow.

* "B. v. subarcticus" Hoy, 1852: Northern Great Horned Owl:Breeding range from Mackenzie and NE E to ; southern limit unclear but at least reaches to and . Non-breeding birds are regularly found south to 45°S, occasionally beyond. Includes the birds described as "occidentalis" (but see below), and "sclariventris" (Dickerman 2004). The older name "wapacuthu" was occasionally used for this subspecies, but it cannot with certainty be assigned to a recognizable and is thus considered a "". The population described as "algistus" is probably based on wandering individuals and/or intergrades of "subarcticus", "saturatus" and "lagophonus".(Holt "et al." 1999):A pale form, essentially whitish with faint buff tinge; black underside barring variable from indistinct to pronounced. Very pale birds are similar to a young female from a distance. Feet whitish to buff, with little or no pattern.

* "B. v. pallescens" Stone, 1897: Desert Great Horned Owl:San Joaquin Valley southeastwards through regions of SE California and S eastwards to W and southwards to and W in Mexico; intergrades with "pacificus" in San Diego County; vagrant individuals of "lagophonus" and the population, which look similar to intergrades, also seem to occur in its range. Resident all-year.:A small, pale dusky buff form with indistinct barring, especially on the underside. Humeral area . Feet white and usually unmarked.

* "B. v. lagophonus" (Oberholser, 1904): Northwestern Great Horned Owl:Breeds from inland south through mountaineous areas of British Columbia to NE , the , and NW Montana. Reported in winter as far south as and Texas. Doubtfully distinct from "saturatus" (Holt "et al." 1999).:Greyer than "saturatus", but similar overall. Feet with dusky barring.

* "B. v." ssp. nov.?: Rocky Mountains Great Horned Owl:The population may constitute an as yet undescribed subspecies. It breeds south of the Snake River south to , , and the . Westwards, it is presumed to occur to the and . The name "occidentalis" may apply to these birds pending analysis of the ; certainly, they were included in the presumed subspecies named thus, but intergradation between "pallescens" and "lagophonus" and altitudinal migration of Rocky Mountain birds is not sufficiently researched yet (Holt "et al." 1999). :A medium gray form, intermediate between "lagophonus" and "pallescens". Moderately barred and tinged buff on the underside. Feet mottled.

The Pleistocene Sinclair Owl from California, "Bubo sinclairi", may be a of this species (Howard 1947).