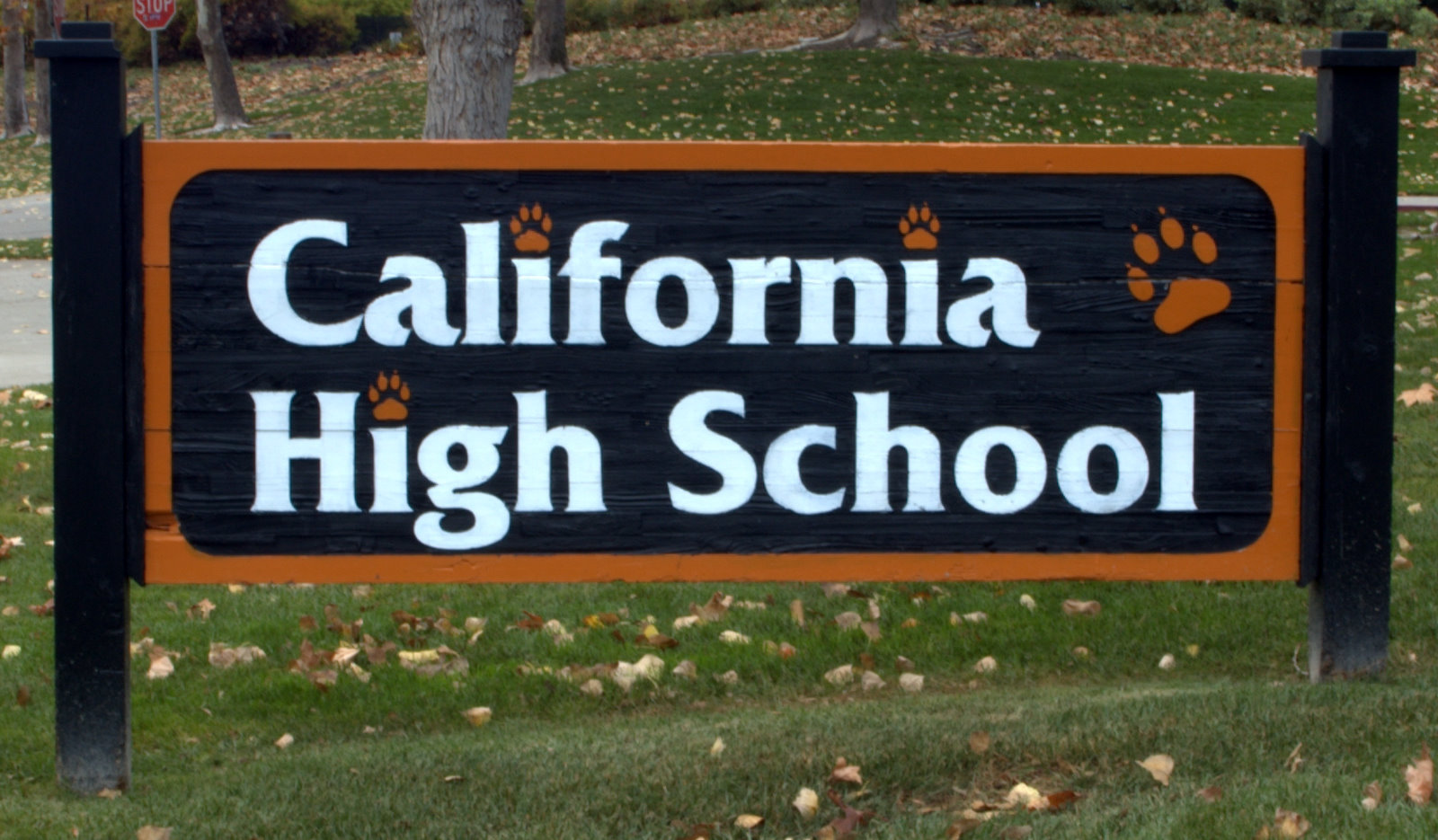 California High School (commonly referred to as Cal High) is a public school located in , in the East Bay of the . Its mascot is a . The school's newspaper is "The Californian" which is published monthly. The majority of students at California High School graduate to continue their education at upper education institutesFact|date=May 2008. A large amount of graduating Cal High students are accepted each year to top colleges (notably UC Berkeley and UCLA)Fact|date=May 2008.

Cal High operates on a block schedule, unlike other schools in the district, which means classes are 100 minutes long and 90 minutes on Mondays. Students meet Tuesdays through Fridays for 30 minutes of SSR (Silent Sustained Reading), which is to become "Tutorial", a time for reading, studying, helping others with classwork, and making up tests, for the 2008-2009 school year. The average Cal High student has a total of 6 classes, those who wish to partake in an extra "A-period" class have 7 classes. (Three classes per school day, odd numbered classes one day and even numbered classes the next. A-period classes meet every day, early in the morning, for 50 minutes, 45 minutes on Mondays.) [ [http://www.calhigh.net California High School Official Site] ]

Cal High's sports rivals are Monte Vista High School and , both located in .

William Everett Pence - Biology teacher who assisted students with discovering the chromosomes of three cancer-related genes. Mr. Pence was also California's Teacher of the Year in 1999. [http://www.cde.ca.gov/ta/sr/ct/honoreesall.asp — California Dept. of Education - 1990-2006 California Teacher of the Year] He was an United States Aquanaut in 1984.

During the 2006-07 school year, California High School was recognized with the Blue Ribbon School Award of Excellence by the [ [http://www.ed.gov/programs/nclbbrs/list-2003.pdf U.S. Department of Education Blue Ribbon Schools Program: Schools Recognized 2003 through 2006 (PDF)] , . Accessed , .] , the highest award an American school can receive. [ [http://www.journalinquirer.com/site/news.cfm?newsid=17475750&BRD=985&PAG=461&dept_id=161556&rfi=6 CIBA cited as one of the best by Education Department] , "", , . "The Blue Ribbon award is given only to schools that reach the top 10 percent of their state's testing scores over several years or show significant gains in student achievement. It is considered the highest honor a school can achieve."] [Viers Mill School Wins Blue Ribbon; School Scored High on Statewide Test; "". , "For their accomplishments, all three schools this month earned the status of Blue Ribbon School, the highest honor the U.S. Education Department can bestow upon a school."]

Cal High's student run monthly newspaper, 'The Californian', is an award winning newspaper. The paper's writers, photographers, and graphic designs/artists have won numerous awards over the past 7 years (2000-2008), including a total of 17 during the 2007-2008 school year.

California High School is ranked #983 in the top 1,200 US High Schools by Newsweek.