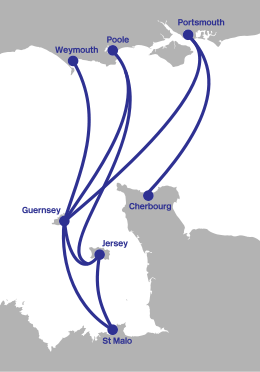 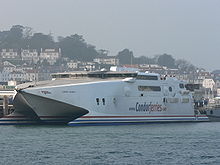 Condor Ferries established the first high speed car ferry service to the Channel Islands from Weymouth in 1993 using the 74m Incat catamaran Condor 10. In the winter of 1993/1994, Condor's parent company, Commodore Shipping, took over British Channel Island Ferries (BCIF) which operated conventional ferry services to the Channel Islands from Poole. Upon taking over BCIF, Condor moved all passenger services to Weymouth and the BCIF freight service was transferred to Commodore Shipping. The BCIF vessel Havelet ran a conventional ferry service from Weymouth from 1994 alongside the Condor 10.

The 1994 season was the Condor 10's last on the Weymouth - Channel Island route, as she was replaced in March 1995 by the larger 78m Incat Condor 11 but her introduction was delayed when the vessel grounded during the sea trials off Tasmania. Condor 11 was travelling at 36 knots and under the command of Incat managing director Robert Clifford when she struck Black Jack Reef some 12 miles off Hobart on 9 October 1994.[1] Between March and May 1995, the Weymouth service was operated by the chartered Seacat Isle of Man. The Condor 11 finally entered service on the 18 May 1995. She was used for one season on the route before being redeployed to Cat-Link in Denmark.

Condor's next vessel was the Condor 12 an 81m Incat which ran between Weymouth and the Channel Islands for the 1996 season. Condor 12 was redeployed to Holyman's new Ramsgate - Ostend service and renamed Holyman Rapide.

1996 was the last year that the Havelet remained in regular service with the company. In 1997, Condor 12 and Havelet places on the Channel Island route were taken by another Incat, this time an 86m design which was named Condor Express.

In March 1997, Condor moved its UK port to Poole. The Condor Express suffered technical problems that led to late-running services. As a result, the Channel Island governments put the licence to operate ferry services to the UK out to tender. P&O European Ferries and Hoverspeed submitted bids to run the service but ultimately Condor retained the licence but was forced to purchase the Havelet to act as an all-weather back-up until the delivery of a new conventional vessel in 1999. It also purchased the Condor Vitesse for a new service to St Malo via Guernsey and made Weymouth its primary UK port, though retaining summer sailings from Poole. Commodore Shipping became sole owner of the company around this time. 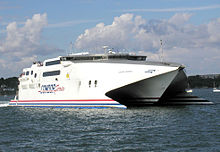 Condor 10 returned to the fleet in March 2002 to replace the Condor 9 on the St Malo - Channel Island service and to fully compete with the existing fast car ferry service of Emeraude Lines. Later that year, the Commodore Group, which included Condor Ferries, Commodore Ferries and Commodore Express, was sold to a management buy-out team for a reported £150 million. The deal was backed by ABN AMRO. Shortly after, the Condor Ferries logo was redesigned for the start of the 2003 season using the same font as the logo Brittany Ferries had adopted in 2002. In 2004, the group was rebranded with Commodore Ferries coming under the Condor Ferries name and Commodore Express becoming Condor Logistics. The group was sold once again in 2004 to the Royal Bank of Scotland's venture capital arm for £240 million.

On 10 December 2007, bad weather caused the Commodore Goodwill to strike the entrance to La Collette yacht basin in St Helier harbour.[2] One of the vessel's propellers was damaged and the ship was sent to Falmouth for the damaged part to be removed to return the ship to service as soon as possible in the run-up to Christmas.[3] On 13 December 2007, the Brittany Ferries freight vessel Coutances was chartered to temporarily take the Commodore Goodwill's place.

In May 2010, Condor Rapide, Incat Hull 045, was added to the fleet to replace Condor 10. This is not the same vessel that covered Condor services in the late 1990s, but a sister ship to Condor Express and Vitesse.

The fleet is as follows.