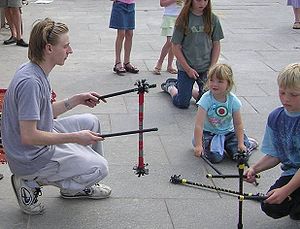 The manipulation of devil sticks (also devilsticks, devil stixx, flower sticks, devil-sticks, rhythm sticks, gravity sticks, or juggling sticks) is a form of gyroscopic juggling or equilibristics, and is generally considered to be one of the circus arts. Sometimes called devil-sticking, other terms for the activity include twirling, sticking, and stick juggling.

A "set" of devil sticks is made up of three pieces — the baton and two control sticks. Nonetheless, it is often called a "pair of sticks." And the flower sticks are similar to juggling. They are basically juggling sticks. If the baton (center stick) is not tapered and has tassels (or other weights) at its end, it can be properly called a "flower stick" (as the tassels will twirl outwards and resemble an open flower when the stick is spun). This term can also refer to hybrid sticks which are both tapered and have weights. Tapered sticks without end weights are known simply as devil sticks. Flower sticks can also be properly called devil sticks, as that is the more general term.

A set of devil sticks consists of one baton—usually about 60–120 cm (2.0–3.9 ft) long—and two control sticks—generally about 1 cm (0.39 in) thick and 30–50 cm (12–20 in) long—which are used to manipulate the baton. The baton (often called "the center stick" or simply "the stick") is in some instances tapered from the end to the center, typically about 3 cm (1.2 in)ch) in diameter at the ends and 1.5 cm (0.59 in)ch) in the middle. Designs and measurements vary quite widely. In extreme cases, the center stick may be as short as 1-foot (0.30 m), or up to a metre or more. Devil sticks are most often made of wood, sometimes turned and left as bare, polished wood, or covered with electrical tape or similar. Some are a length of dowel wrapped with card and plastic tape, or a strip of rubber, etc. There are many different types.

The control sticks are usually wooden dowel, and are usually covered with leather, silicon, rubber, plastic tape, skateboard grip, sandpaper or cloth. This provides good grip or friction when in contact with the devil stick.

The baton is lifted/struck/stroked alternately by the two control sticks ('handsticks' or 'sidesticks').

In one basic stick maneuver, known as the Pendulum, the Idle or Tick-tock, the center stick is lifted alternately with the left and right handsticks touching the baton at a point about halfway between the center of gravity and each end, causing the ends to swing to either side while the center of the baton remains at a somewhat constant height. Another common version of 'tick-tock' is called trapping, where both handsticks touch the devilstick at the same time, one above the centre point, the other below.

The pendulum is an important move to learn, because to a great extent, every other trick is a variation on it.

The 'helicopter' spin is a variation in which a horizontal rotational force of applied as the baton 'pendulums' in the vertical plane, causing a continuous rotation in a nearly horizontal plane. Advanced twirlers can twirl the stick with one stick only (called the propeller), with an arm, knee or other limb and are able to manipulate the baton in any plane above below or in front of or behind the performer's body while walking, unicycling or tightrope balancing. Some can even twirl two batons simultaneously.

Many tricks as possible by making different variations:

The art of devil sticks has continuously evolved as it has been passed down through the centuries.[citation needed]

The origins of devil sticks remain obscure. What is known is that many civilizations around the world were creating several types of devil sticks starting at some time over 3,500 years ago.[citation needed][1][not in citation given]

Some modern devil sticks have soft ends for safety and a different style of play — although it is actually quite possible to knock oneself unconscious with some of the heavier, unpadded batons.

Nowadays, they are often colorfully decorated and are known variously under such brand names as Devilsticks, Quick Stix, Crystal Stix, Devil Stixx, Hippie Sticks, Mixstix, Equilibristicks (a play on the word 'equilibristics'), Lunastix, Trick Sticks, Juggling Sticks, Stunt Sticks and many other names. Despite the plethora of names, stick twirlers often call them simply 'sticks' or 'devilsticks'.

As new materials and construction techniques have become available, resourceful jugglers and craftspersons have advanced the design of the 'modern devil sticks', making them more durable, more portable, or more favorable to performing feats previously deemed impossible. One such advance has been the creation of sticks whose ends can be lit on fire, sometimes known simply as "fire sticks."

Fire flower sticks are another recent development. These are similar to fire sticks, but have silicon rubber or wrap tape which allows for maximum grip and playability, as well as having flower chain ends that counteract the gravity roll.

A devil stick (right), flower stick (middle, with rubber flares to slow it down), and two smaller control sticks (left).

Flower sticks are one variation on devil sticks. Flower sticks were designed to slow down the movement of the heavier and shorter central baton of the traditional devil sticks, so that it can be used to learn more difficult moves and tricks.

An increasingly common variation on stick design is that of fiddlestix or Al Sticks, which are made of cylindrical aluminum alloy or titanium shafts, either hollow or solid. The center stick is wrapped spirally with dense suede, butted edge-to-edge to make a smooth, suede covered 'frictive surface'; the end of the shaft is wrapped with a one- to two-inch (5 cm) thick layered, floppy 'tassel' of wide-cut, fringed suede. The control sticks of a set of fiddlestix are either similarly covered with suede ('slider set' is what this is called, as the suede can help the centerstick to slide smoothly along the control stick) or are covered with surgical rubber or silicone tubing (grippier but no slide). In the case of the solid titanium baton, the surface of the stick is either machine-milled or grit-blasted to produce the friction surface, and there is no covering on the length of the center stick. This type of stick is almost universally paired with control sticks covered in a soft natural latex, silicone, or hard vulcanised rubber tubing — materials that provide varying degrees of friction against the bare metal of the baton's control surface.

The length of the shaft and the weight of the end-pieces work together to retard rotation about the pivot point of the center stick, creating a larger 'sweet spot' (the point at which the control stick has the greatest degree of controlled influence on the movement of the baton). The larger sweet spot combined with increased rotational inertia allows the sticks to be played in ways that would be difficult to learn otherwise. It also increases the illusion that the laws of physics/gravity are being broken. To an extent, the longer the shaft, and the heavier the weight, the greater the illusion.

This process of weight vs. speed can be understood simply with the high school physics equation T=Iα, where T is the torque being applied, I is the moment of inertia and α is the rotational acceleration. Torque is the cross product of Force and radius, or the tendency of a force to cause rotation. For a more intuitive view of the equation rearrange it to be α=T/I; here it is clear the acceleration is dependent upon torque and moment of inertia.

Many tricks learned on the slower flower sticks can be translated to the more difficult and faster one-piece devil sticks. It is possible (and fun) to twirl other objects such as a walking stick, NHS crutch or rolled-up umbrella — indeed, almost any relatively round object with a long axis.

Traditional devil sticks are made of a one-piece lathed dowel of perhaps two feet long with the ends made at least twice as thick as the middle. The shorter length makes it spin faster and increases its unpredictability. It is often wrapped with tape or other material to allow some traction for the contact with the same style rubber hand sticks, and the ends are sometimes slightly padded. This is the more dangerous juggling toy that can split a lip or deliver a serious blow to the inattentive learner.

Though stick manipulation may seem at first glance to be a solo performance art, there are numerous group activities enjoyed by 'stickers':

Two or more twirlers sling the center stick back and forth amongst themselves, either with one shared stick, or with everyone passing their own stick at once.

Juggle till you drop

"Juggle till you drop" is an activity in which a group of twirlers share one baton. The juggler with the baton attempts increasingly more flamboyant tricks during his turn, attempting to 'push the envelope' until he loses control and drops the baton — a drop is when the stick hits the ground and comes to rest — whereupon he immediately hands the control sticks to the next player, who attempts an even more difficult combination of moves. The point of the game is to juggle so aggressively that each turn lasts a matter of seconds. As a result:

Half-sticking is where two jugglers juggle together standing shoulder to shoulder, facing in the same direction, each with one control stick, each one only doing half the work.

Players stand on either side of a volleyball net with two control sticks, passing or tossing the main devil stick back and forward over the net. Each player may only tap the devil stick three times before passing it over the net or over to their team mate. Scoring and faults are the same as in normal volleyball.

A group of spinners will perform an infinite propeller for as long as they can. A host may ask the spinners to change directions or hands. Once only a small amount of spinners are left, the game turns into combat sticks. 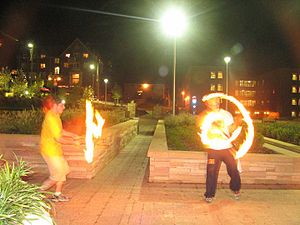 Fire devil sticks. The photographer has used a long exposure time to capture the trails of motion.

Fire devil sticks (also known as firesticks) can be substituted for ordinary devil sticks to add an element of danger to performances. Fire devil sticks usually have an aluminum core and have wicks on the ends to allow them to be set on fire, using a variety of flammable liquids as fuel. The most commonly used fuel is paraffin oil, or kerosene as it is known in the U.S. Different substances can be added to the fuels to produce different colours of flame. For example, copper chloride will produce a blue flame.