The Maryland Transit Administration (MTA) is a state-operated mass transit administration in Maryland, and is part of the Maryland Department of Transportation. It is better known as MTA Maryland to avoid confusion with other cities' transit agencies who share the initials MTA. The MTA operates a comprehensive transit system throughout the Baltimore-Washington Metropolitan Area. There are 78 bus lines serving Baltimore's public transportation needs, along with other services that include the Light Rail, Metro Subway, and MARC Train. With nearly half the population of Baltimore residents lacking access to a car,[3] the MTA is an important part of the regional transit picture. The system has many connections to other transit agencies of Central Maryland: WMATA, Charm City Circulator, Howard Transit, Connect-A-Ride, Annapolis Transit, Rabbit Transit, Ride-On, and TransIT.

The MTA was originally known as the Baltimore Metropolitan Transit Authority, then the Mass Transit Administration before it changed to its current name. The MTA took over the operations of the old Baltimore Transit Company on April 30, 1970.[4]

Many of the routes of most of the agency's current bus lines are based on the original streetcars operated by the Baltimore Transit Company and its parent companies from the 1890s to the 1960s. All these routes were ultimately converted to rubber tire bus operations, and many of them were consolidated, extended into newly developed areas, or otherwise reconfigured to keep up with the ridership demands of the times.[4] Additional routes and extensions were added in later years to serve communities that were later developed, and to feed into Metro and Light Rail stations that were later built.

With the growth in popularity of the private automobile during the 20th century, streetcar and bus ridership declined, and the needs for public transportation changed. Mass transit in Baltimore and other cities shifted from a corporate operation to a tax-subsidized state-run service. The amount of service provided was greatly reduced, and some areas once served by streetcars are currently served by buses very minimally or not at all.[4] The demise of the Baltimore streetcar took place between the years of 1947 and 1963, as operators found buses to be low maintenance and more cost-efficient. As rails were demolished, Baltimore was no longer a streetcar city. As transit needs and trends changed, rail transit did return to the city, with the Metro Subway opening in 1983 and the Light Rail in 1992.[4]

Bus services operate throughout the Baltimore-Washington Metropolitan Area and other parts of the state. These include local bus routes 1 through 99, which serve areas of Baltimore City, Baltimore County, and Anne Arundel County. Neighborhood shuttle routes 97 and 98 serve specific Baltimore City areas. QuickBus operating limited-stop service. Commuter, express, and intercounty connector bus lines, which also operate within other parts of the state, ranging from routes 104 through 995.

Local bus lines are identified by a one- or two-digit number. There are currently 45 local bus routes throughout the urban and suburban area of Baltimore City.[5]

The MTA currently operates four limited-stop routes known as QuickBus, which are designated as routes qb40, qb46, qb47, and qb48.[5] 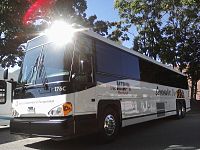 Buses travelling on MD 200 are numbered in the 200 range. Routes 201 and 202 connecting from Gaithersburg, Maryland to BWI Thurgood Marshall Airport and DoD/Fort Meade.[8]

This system operates elevated and underground from a corporate and shopping complex in Owings Mills in Baltimore County into the heart of Downtown Baltimore City's business, shopping and sightseeing districts to the world-renowned Johns Hopkins Medical Center Complex. The 15.5-mile (24.94 km) northwest-southeastbound route includes 14 station stops. Its route through the densest parts of the city is underground, from Hopkins Hospital to a portal west of Mondawmin station, where it immediately rises to an elevated concrete right of way parallel to Wabash Avenue practically at the city line. Entering Baltimore County, the line goes to surface, passing through and virtually dividing communities along the way to commuter based stops at Milford Mill Rd.(Pikesville), and Old Court Rd.(Pikesville). Leaving Old Court, the tracks pass underneath the I-695/795 interchange, and travel the median of 795 till their end at Owings Mills (Painter's Mill Rd.) This station is the centerpiece of a huge project intending to urbanize that immediate area, with a Baltimore County Public Library branch, and classroom space for the Community College of Baltimore County under construction. Residential and commercial development is planned to follow the completion of the education buildings. There are efforts underway to extend the line northeast through the city with phase 1 to Morgan State University, and phase 2 beyond the city limits to the White Marsh Town Center area. If this comes to fruit, the line will be renamed the Green Line, coordinating with the new Red Line (east-west Woodlawn/Security-Hopkins Bayview Hosp.) that's in its preliminary engineering stage. Funding for the Green Line extension is still years from being secured, and includes an option to extend it as light rail or BRT from Johns Hopkins Hosp. 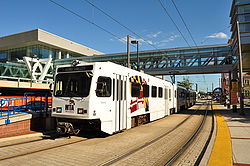 This service travels from a corporate, hotel, and shopping complex in Baltimore County’s Hunt Valley, through the suburbs north of Baltimore and northern Baltimore City and into the heart of downtown Baltimore's shopping, sightseeing, dining, and entertainment districts, past the harbor and through southern Baltimore City and finally to BWI Marshall Airport and Cromwell Station/Glen Burnie in Anne Arundel County. There is also a spur to Amtrak’s Baltimore Penn Station.

The Light Rail operates at grade for the most part, though it travels on bridges crossing several bodies of water. There are 33 station stops along the 30.0-mile (48.28 km) system. Although much of the line was single-tracked when it was built, the MTA completed a double-tracking project in early 2006, and now only a few short single-track sections remain. 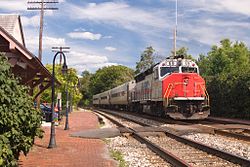 This service operates three lines that provide commuter rail service to riders out of and into Baltimore, Washington, D.C., Frederick, Perryville, and Martinsburg, WV, as well as several other locations in between.

The MTA began offering paratransit service for persons with disabilities in 1978 when it took over a mobility service in Baltimore previously operated by Lutheran Family Services.[9] This mobility service is a "non-fixed route" service and consists of a fleet of specially converted Ford E-Series vans and Ford Crown Victorias. Some service is contracted out to MV Transportation and Veolia Transportation, but all vehicles are owned by MTA. 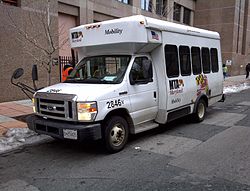 Previously the MTA has studied a maglev train between Baltimore and Washington, D.C;[11] this project now appears inactive as the Pittsburgh-Harrisburg area was chosen by the FedDOT in early 2009.

Currently the MTA is studying a number of proposed services, which includes the Red Line (a proposed east–west light rail or bus rapid transit line that would pass from Woodlawn pass near Patterson Park) to Johns Hopkins Bayview Med. Ctr. and the Green Line (a proposed north–south line that would extend from the Johns Hopkins Hospital into northeast Baltimore, possibly as an extension of the Metro Subway). As of summer 2011, the Red Line has received federal permission to enter preliminary engineering. Efforts to fund both lines continue, with overall priority going to the Red Line as of now.

Outside of Baltimore the MTA is also studying the Purple Line between Bethesda and New Carrollton, and the Corridor Cities Transitway between Gaithersburg and Clarksburg. Both studies are evaluating bus rapid transit and light rail options.

These are the current fare prices for MTA buses, Light Rail, and Metro Subway travel.[12] There is a separate fare structure for MARC Train services.

Prior to the summer of 2005, the MTA used an older fare collection system. Day passes purchased on buses were printed out by a separate machine than the bus fareboxes. It was possible to alter these passes so that they could used on other days, and to sell them to other passengers, as well as make duplicate passes and sell them to others for a cheaper price than the MTA's official fares. This was despite the fact that they were officially non-transferable.

The newer day passes can only be used on the appropriate day because the machine encodes the date and expiration time in the magnetic strip, which is read when swiped through the magnetic reader. Swiping the pass also sets a time waiting period on reuse so the pass cannot be immediately handed to a different passenger and used for free boarding. This also makes it difficult for passengers to use counterfeit passes when boarding the bus, Light Rail, and Metro Subway. The MTA continues to struggle with passengers who purchase day passes, use them, then resell them at a direct loss to the agency. State Employees who possess a Maryland State Employee ID card can ride MTA local bus, Light Rail, and the Metro Subway free of charge. Any state Employee with the ID card can get a continuation ticket to get through the gates on the Metro Subway. For the bus, they show the state employee ID card to the driver when boarding. On the Light Rail, they only have to show the ID card in the event of a fare inspection while other passengers show their tickets. MTA employees can also ride free of charge if they carry their MTA employee ID card. [14]

The MARC train service is preparing for the eventual integration with the regional SmarTrip smartcard-based fare system. The system will involve conductors using hand-held units to validate SmarTrip cards as well as the MTA's Maryland Transit Pass.

The MTA plans to begin selling smart cards under the name CharmCard. These will be similar to, and compatible with, the Washington Metropolitan Transit Authority's regional smart card system, the SmarTrip card.[15]

When the CharmCard system is fully implemented, it will be used not only on Maryland Transit Administration transit services, but will also be able to be used in Washington D.C. on all WMATA buses, the Washington Metro and on most local bus services in Northern Virginia. Likewise, the WMATA SmarTrip card will be accepted by the fareboxes used by the MTA.[16]

An agreement between the Baltimore City Public School System and the Maryland Transit Administration provides eligible BCPSS students (usually students who live outside a predetermined area surrounding the school) during a school year with a color-coded booklet of dated tickets each month and an identification card. The tickets allow students to ride on MTA buses, light rail, and subway free going to and from school. The farebox is able to issue magnetic transfers to ticket holders who must use more than one bus. They're valid for 90 minutes of unlimited travel at the driver's discretion.[17]

The Maryland Transit Administration has a special program set up with 24 Baltimore area colleges and universities which allows college students who are enrolled in a minimum of 6 hours per week can receive a monthly pass for $39.00.[18]