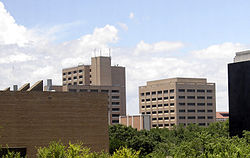 The Cockrell School of Engineering at The University of Texas at Austin has more than 7,800 students enrolled in nine undergraduate degrees and thirteen graduate programs. The college is ranked sixth in the world according to the Academic Ranking of World Universities[1] and eighth nationally by U.S. News & World Report,[2] while all graduate programs are ranked in the top twenty nationally.[3] With annual research expenditures of over $150 million and the fourth largest number of faculty in the National Academy of Engineering,[4][5] the Cockrell School of Engineering is highly respected worldwide.

Previously known as the College of Engineering, on July 11, 2007, The University of Texas at Austin renamed the College after 1936 graduate Ernest Cockrell Jr., whose family has over the past 30 years helped to build a $140 million endowment for the College.[6]

College of Engineering undergraduate departments. Rankings, in parentheses, taken from the 2010 edition of U.S. News & World Report unless otherwise specified.

*from 2011 edition of US News and World Report

The Ramshorn is one of the most prominent symbols associated with the College of Engineering. Its origins as such can be traced back to over a century ago, when T.U. Taylor, the first engineering faculty member and first dean of the College, began drawing the elaborate checkmark on students' work. A mark reserved for perfect papers, Taylor overheard a student remark he had received a "ramshorn" in 1905, from which the symbol took on its current interpretation and significance. For current engineering students, it is a reminder of the high quality standards associated with all UT Austin engineers, past and present.

Alec is one of the most well-known traditions known of the College of Engineering. Over nearly 100 years, Alec has had his share of adventures; however, his beginnings as the patron saint of the College came as the byproduct of the efforts of a group of clever, mischievous sophomore engineers back in 1908.

Joe H. Gill and his engineering friends thoughtfully considered how to make a holiday of April Fool's Day. After an unsuccessful attempt involving tying cans around dogs' tails and releasing them to disrupt class, the group of students saw a wooden statue about five feet high while getting refreshments, which they requested to borrow. The next day, Gill presented the statue as their patron saint and traced his ancestry back to ancient times between classes. The presentation successfully broke up classes, and led to his christening as Alexander Frederick Claire, patron saint of UT engineers, exactly one year later. Alec was at the center of a friendly rivalry between law and engineering students for many years, and was subject to numerous escapades such as kidnappings and amputations. Today, what is left of the original wooden statue is safely preserved in the engineering library.

Every year, engineering groups on campus build new Alecs which are then voted on by the students. The winner is announced on April 1 during Alec's birthday party.

The Cockrell School of Engineering is home to over 60 student organizations that offer a wide variety of student groups that provide professional development, service, and social opportunities. [8]