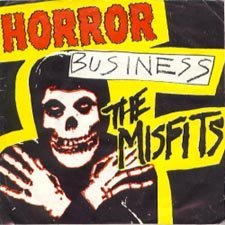 The cover art for "Horror Business" featured the first appearance of The Crimson Ghost, from the 1946 film serial "", who would become the band's mascot. The title track, "Horror Business", includes the lyrics "Psycho '78" and "I'm warning you, I'll put a knife right in you". These were inspired by the deaths of the ' and his girlfriend .

These songs were recorded between and , which is contrary to the insert which claimed , at C.I. Recording in New York, NY as part of a planned 5-track "Who Killed Marilyn?" 12" EP. However, after an of that EP was made, frontman realized they could not afford a run of them, so they instead released this 3-track 7" EP. The other two tracks from this session were not released until "" was released in 1985.

* First pressing - 25 copies on black vinyl (have sold for more than $1500 a piece, however one sold for $8,000 - actually at this point black HB's have been seen to go for $12000+ on ), were a result of a stamper failure, originally the acetates were cut and mastered by Rich Flores.
* Second pressing - 2000 copies on yellow vinyl (20 of which were inadvertently double A-sided), a re-cut master done at a west coast record pressing plant and mastering facility (unknown)