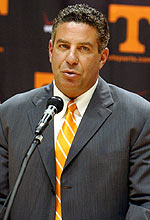 
Bruce Dean-Fredrick Pearl is an American coach who currently serves as the of the men's team. A native of , Pearl attended Sharon High School in and is a 1982 graduate of . He and his ex-wife, Kim, have two daughters, Jacqui and Leah, and two sons, Steven, who is on the Tennessee basketball team [ [http://www.utsports.com/basketball/playerbio.aspx?id=31256 UT Sports Official Site ] ] and Michael. He is the first coach to bring the Tennessee Volunteers to a #1 ranking. Pearl, who is , is also currently serving as the head coach for the World Maccabiah Games which will be held in 2009.fact|date=July 2008

Before coming to Tennessee, Pearl was the head coach at the University of Wisconsin-Milwaukee and, prior to that, at the , where he won a Division II national championship. He also served as an assistant coach at the under then-head coach Tom Davis. He has quickly helped turn the Tennessee program around, leading it to one of its best seasons in many years.

During the 1988-1989 basketball season, Pearl, then an assistant coach at the , was at the center of a recruiting scandal involving the . Both Illinois and Iowa were recruiting , a top high school player from Chicago. Pearl lost this recruiting battle when Thomas committed to Illinois. Thereafter, Pearl called the high school student and recorded a phone conversation with Thomas. During the conversation, Pearl asked Thomas if he had been offered an and cash by Illinois assistant coach Jimmy Collins, and Thomas indicated he had. Pearl then turned over copies of the tapes to the NCAA, accompanied by a memo describing the events. However, Pearl refused to turn over the original tapes to the NCAA. The tapes had numerous clicks and missing portions and were alleged by the NCAA to have been edited. During the subsequent NCAA investigation, Thomas denied the allegations and said the story was false and was verified through a lie detector test. The NCAA did not find Illinois guilty of any wrongdoing relating to Thomas' recruitment, finding that the proof provided was not "credible, persuasive and of a kind on which reasonably prudent persons rely in the conduct of serious affairs." [cite press release | title = University of Illinois, Champaign, Infractions Report | publisher = NCAA Committee on Infractions | date = 1990-11-07 | url = https://goomer.ncaa.org/wdbctx/lsdbi/LSDBi.MajorInfPackage.ProcessMultipleBylaws?p_Multiple=0&p_PK=93&p_Button=View+Public+Report&p_TextTerms=ThisIsADummyPhraseThatWillNotBeDuplicated&p_TextTerms2=ThisIsADummyPhraseThatWillNotBeDuplicated&p_Division=1 | accessdate = ] However, the investigation uncovered other violations, and Illinois was punished due to a finding of "lack of institutional control" based in part on previous infractions involving Illinois' football program. The event led to a "blackballing" by many coaches in D-I, and even led ESPN commentator to call Pearl's actions "career suicide" during a telecast.

When Pearl and Collins were both head coaches for four years in the , the two men never engaged in the traditional postgame handshake, reportedly due to lingering feelings over the incident. When Thomas was asked about forgiving Bruce Pearl in a 2005 interview, he was quoted as saying "It's hard to forgive a snake." Thomas went on to play basketball at the University of Illinois, becoming its all time leading scorer.

It should be noted that the state of Iowa is a "one party consent" state, wherein it is legal for an individual to record a telephone conversation to which that individual is a party. See, Iowa Code Section 727.8 (2007).

Pearl picked up a Screaming Eagles team at USI in 1992 that had won just 10 games in the previous season. Pearl posted a 22&ndash;7 record in his first season and led the Eagles to nine straight NCAA D-II tournaments in addition to winning four titles. In 1994, USI finished with a 28&ndash;4 record en route to a loss in the D-II championship game; in 1995, the Eagles won 29 games and claimed the D-II championship. Pearl was named the NABC Division II coach of the year after his national championship. He left USI with a 231&ndash;46 record over nine years.

Pearl took over as head coach of Milwaukee in 2001. In just four seasons, he compiled 86 wins (including a school-record 26 in 2005 and a new record for winning percentage) and led Milwaukee to their first NCAA tournament appearances in 2003 and 2005. Pearl led Milwaukee to the Horizon League tournament title in both of those years. He also led the school to its first ever NIT bid, as well as its first-ever NCAA D-I postseason victory, in 2004. Milwaukee's 2005 NCAA Tournament run capped the best season in school history, as the Panthers won both the regular season and conference tournament titles, defeating rival Butler University in the championship game. Utilizing an intense full-court press (labeled the "UWM Press"), the Panthers scored two upsets in three days over and en route to the Sweet Sixteen, where they fell to eventual national runner-up . The Panthers finished their season 26&ndash;6 and were ranked in the coaches poll at the end of the season for the first time ever (#23). Pearl left Milwaukee after the 2005 season, his fourth, as the Horizon League's leader in all-time winning percentage (51&ndash;13, 79.7%).

Moving on to Tennessee

On , , Pearl was named as the new head coach at Tennessee, succeeding . He got off to a rocky start when Jamont Gordon and Tyler Smith, two highly-rated in-state recruits, one of whom (Smith) had signed with the Vols under Peterson, decided not to attend Tennessee. Gordon went to conference rival . Smith opted for a season of prep school before heading to Iowa, though later transferred to Tennessee and became a starter. [cite web| url=http://sports.espn.go.com/ncb/columns/story?id=3075198| title=Smith carrying 'a heavy heart' after his father's death last month] Pearl stirred up more controversy when he released Matthew Dotson from his scholarship.

Expectations were low for the Vols in Pearl's first season. Having lost their two leading scorers from a team that had been just 14&ndash;17 the previous season, Tennessee was picked to finish fifth in the six-team Eastern Division of the . However, the season started off well, and Tennessee entered the national rankings in December, when it routed then No. 2-ranked Texas, 95&ndash;78.

The Vols went on to lead the SEC East for virtually the entire season, with other highlights being a win over Kentucky at and two wins over eventual national champion Florida. But after entering the AP Top 10 in February, the team lost six of its last nine games and dropped to a ranking of 18th. Although Tennessee won the SEC East, it was upset in the second round of both the SEC and NCAA Tournaments, the latter as a No. 2 seed. The team's 22-8 record was one of the best in school history. Following the season, Pearl drew accolades from national recruiting services for signing one of the nation's best recruiting classes, featuring three top-50 recruits in Duke Crews, Wayne Chism and Ramar Smith. [ [http://rivalshoops.rivals.com/content.asp?CID=585769 Rivals.com Basketball Recruiting - Early enrollee, school switch change team rankings ] ]

On January 22, 2007, Pearl attended a Lady Vols game in Knoxville, shirtless. He had his upper body painted orange and spelled out "V-O-L-S" with a few of his players (Pearl was the "V"). Pearl stood in front of the student section and cheered for the Lady Vols as they came out. Pearl's actions brought national media attention to the Tennessee program and highlighted efforts to support women's collegiate athletics. Lady Vols basketball coach returned the favor on February 27, 2007, by coming out as a cheerleader, complete with uniform, and rallying fans. The seventh-largest crowd in school history also witnessed Pearl's squad rout the then No. 4-ranked and defending National Champion Florida Gators.

Pearl's team went on to finish tied for second in the SEC East with Vanderbilt, earning a No. 5 seed in the NCAA Tournament. The Vols crushed Long Beach State by 35 points in the first round, then rallied to upset Virginia to reach Pearl's second Sweet 16. The Vols were defeated in the next round by the nation's top-ranked Ohio State Buckeyes, losing by a point though the Volunteers lead the majority of the game. Tennessee's 24 wins were then ranked third in the program's history. Pearl was rumored as a candidate for the head coaching position at Iowa, but indicated on March 27, 2007, that he was not interested in leaving Tennessee. [ [http://www.kcci.com/sports/11404205/detail.html Report: Bruce Pearl Turns Down Iowa Coaching Job - Sports News Story - KCCI Des Moines ] ]

On , , Pearl led the second-ranked Vols into in-state, undefeated rival Memphis to play the #1 ranked Tigers. After a back and forth, emotionally heated contest, Tennessee defeated Memphis 66&ndash;62, handing the opponent its first loss of the season and its first home loss in 47 games. The win also cemented UT with a #1 rank the following week. The rank became the first time the school was ranked #1 in the country. However, three days later, the #1 Vols were upset by the Vanderbilt Commodores 72&ndash;69.

On , , Pearl defeated the Florida Gators 89&ndash;86 to claim Tennessee's first outright SEC Regular Season Championship in 41 years. On March 16, 2008 Tennessee was chosen as a #2 seed in the East region of the 2008 NCAA basketball tournament. Bruce Pearl advanced the Volunteers to the quarterfinals (Sweet 16) of the East Regional. They ended their season losing to the Louisville Cardinals by a score of 79&ndash;60.

It took Bruce Pearl just two years to record a win against all SEC teams during a time when the SEC was arguably the top conference in college basketball. During those two years, the SEC produced two national champions, three final four teams, and sent eight different teams to the NCAA tournament.