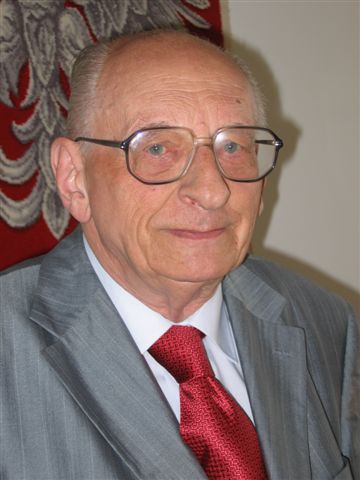 Władysław Bartoszewski (pronounced|vwaˈdɨswaf bartɔˈʃɛfskʲi; born , in ) – Polish , social , , , , inmate, soldier of , activist, participant of the , twice the Minister of Foreign Affairs, of the , of .

Bartoszewski studied at Saint Stanisław Kostka Secondary School. In 1939 he graduated from The Humanist High School of the "Future" Educational Society in .

In September 1939, Bartoszewski took part in the of Warsaw as a -bearer. From May 1940, he worked in the first social clinic of the in Warsaw.

On , Bartoszewski was detained in the Warsaw district of during a massive (""). From , he was an prisoner (his number was 4427). He was released from Auschwitz on , due to actions undertaken by the Polish Red Cross.

After his release from Auschwitz, Bartoszewski contacted the ("Związek Walki Zbrojnej"). In the summer of 1941, he reported on his concentration camp imprisonment to the Information Department of the Information and Bureau of the Home Army (, or AK, a reformed version of the Association of Armed Struggle and the largest in Poland). In summer 1942, he joined the ("Front Odrodzenia Polski") – a secret, Catholic, social-educational and charity organization founded by . From October 1941 until 1944 Bartoszewski studied Polish Studies in the secret Humanist Department of at the time when higher education of Poles was outlawed by the German occuaptional authorities.

In August 1942, Bartoszewski became a soldier of the Home Army, working as a reporter in the "P" Subdivision of the Information Department of its Information and Propaganda Bureau. His pseudonym “Teofil” was inspired by Teofil Grodzicki - a fictional character from ’s novel entitled "The Sky in Flames". He cooperated with in the two-man P-1 report of the "P" subdivision.

From September 1942, Bartoszewski was active on behalf of the Front for the Rebirth of Poland in the and its successor organization, the Council for Aid to Jews (codenamed ). Żegota, a Polish World War II resistance organization whose objective was to help Jews during , operated under the auspices of the through the Delegatura, its presence in Warsaw. Bartoszewski remained a member of Żegota until the . In 1943, he replaced in the Jewish Department of the Delegatura. [ [http://www.ceeol.com/aspx/getdocument.aspx?logid=5&id=89065a59-639e-46ec-b5df-095926f5db45 Janusz Marszalec Murder on the Makowieckis and Widerszal. Old Case, New Questions, New Doubt Zagłada Żydów vol. II 2006] ]

From November 1942 to September 1943, Bartoszewski was an editorial team secretary of the Catholic magazine "Prawda" ("The Truth"), the press organ of the Front for the Rebirth of Poland. From fall of 1942 until spring of 1944, Bartoszewski was the of the Catholic magazine "Prawda Młodych" ("The Youth's Truth"), which was also connected with the Front for the Rebirth of Poland and was addressed to university and high-school students. In November 1942, Bartoszewski became a vice- of a division created in the Department of Internal Affairs of the Delegatura whose remit was to help prisoners of prison. In February 1943, Bartoszewski begame a and vice-manager of the Department's Jewish Report. As a part of his activities for Żegota and the Jewish Report, Bartoszewski organized assistance for the participants of the in April 1943.

On , Bartoszewski began his participation in the Warsaw Uprising. He was an aide to the commander of radio post “Asma” and editor-in-chief of the magazine "The News form the City and The Radio News". On the , by the order of the of the Warsaw District of the AK – Antoni “Monter” Chruściel, Bartoszewski was decorated with the (as a result of the proposal put forward by the chief of the Information and Propaganda Bureau in General Headquarters of the Home Army – ). On , he was appointed by the AK commander general Tadeusz “Bór” Komorowski (also due to a proposal by Rzepecki). He received the order on .

Bartoszewski left Warsaw on . He continued his underground activity in the Information and Propaganda Bureau of the Home Army, at its General Headquarters in . From November 1944 to January 1945 he held a position as editorial team secretary for "Information Bulletin". At the end of February 1945 he returned to Warsaw, where he began his service in the information and propaganda section of NIE resistance movement. From May to August 1945, Bartoszewski was serving in the sixth unit of the Delegatura (he was responsible for information and propaganda) under the supervision of Kazimierz Moczarski). On , he revealed that he had served in the AK.

In autumn 1945 he started his cooperation with the at the presidium of the government and the. His information gathered during the occupation period about the Nazi crimes, the situation in concentration camps and prisons, as well as his knowledge concerning the Jewish genocide appeared to be very helpful.

In February 1946 he began his work in the editorial section of "" ("People’s Gazette"), the main press organ of the ("Polskie Stronnictwo Ludowe", PSL). Soon, he joined the PSL, at that time the only influential party in opposition to the communist government. In the articles published in "Gazeta Ludowa", he mentioned the outstanding figures of the (the interview with , the report from the funeral of ), and the events connected with the fight for liberation of the country (a series of sketches presenting the Warsaw Uprising entitled "Dzień Walczącej Stolicy").

Due to the collaboration with the oppositional PSL he soon fell victim to repressions by the s. On , he was falsely accused of being a spy. He was arrested and held by the . In December he was transferred to the and released on the , due to the help of (a former chief of Żegota, then working in the ). Although he was accepted into the third year of Polish Studies in December 1948, Bartoszewski's arrest in 1949, and the resultant five years' imprisonment, rendered him unable to finish his studies.

Bartoszewski was again arrested on . On , he was sentenced by the Military District Court for eight years under the accusation of being a spy. In April 1954, he was moved to the prison in and in June to the prison in . He was released in August 1954 on a year due to his bad health condition. On , during the wave of , Bartoszewski was informed he was wrongly sentenced.

In November 1958 he was again accepted by the Linguistic Department of Warsaw University, in extramural mode. He submitted his master’s thesis written under the supervision of professor ; however, by decision of the vice-, he was expelled from the university in October 1962.

On , he was decorated with the "" medal for his help to the Jews during the war (by the proposal put forward by the ). From September to November 1963 he was staying in at Institute invitation. In the name of the Council for Aid to Jews, he received the of the (in 1966, he also received the medal of the Righteous Among the Nations).

From November to December 1963, Bartoszewski was staying in , where he entered into communication with Austrian intellectual and political societies. In November 1963, he started his cooperation with . In the next years he was traveling to the , , , Israel and the , where he got in touch mainly with the representatives of Polish (among others with , , , and ).

In the years 1969-1973 he was the chairman of the Warsaw Department of the ("Towarzystwo Przyjaciół Książki"), and in December 1969 he was appointed a member of the board of the Polish . In the years 1972-1983, he was the chief secretary of the Polish PEN. In the years 1973-1982 and 1984-1985 he was lecturing as an older lecturer (the counterpart of vice-). His lectures concerned the modern history (with the special emphasis on the war and occupation) in Institute of Modern History on the Humanistic Science Department of KUL (). In December 1981 he was an active participant in the , which was interrupted by the enforcement of the .

Władysław Bartoszewski took part in many international conferences and symposia dedicated to the issues of the World War II, the Jewish genocide, Polish-German and Polish-Jewish relationships, and the role of Polish intellectualists in politics. He delivered a number of lectures and reports on the various international forums.

In 1970, due to his opposition activity and various relations in Western countries he was forbidden to publish his works in Poland (till Autumn 1974), he also fell victim to other s (searches, denials of , distributing forgeries). In 1974, he was engaged in the activity that focused on reprieving the convicted members of the organization (among others and ). In January 1976, as one of the first, Bartoszewski signed the letter of intellectualists protesting against the introduction of changes into the constitution of the . Since 1978 he had been taking part in establishing the Society for Educational Courses and he had been lecturing at the "".

On , he signed the intellectuals’ letter to the protesting workers from the Polish coast. In the years 1989-1991 he was a member of . After announcing the on , he was an internee in prison and later in Center in Jaworze at Military Training Area. He was released on , due to the support from intellectual communities from Poland and from abroad.

From September 1990 to March 1995 Bartoszewski was holding the position of the of Polish Republic in Austria. In 1995, he was the in ’s government. On , he delivered over an hour speech during the solemn session of and on the occasion of the 50th anniversary of the ending of the World War II as the only foreign speaker. On , he resigned from the position due to the end of ’s presidential term.

Once again, he became a chief of Polish in June 2000 in ’s government. From 1997 to 2001, he was the of the fourth term and the chairperson in the ; as a Senior Speaker he chaired the inaugural session of the .

Since , Władysław Bartoszewski is the in the Office of the Chairman of the (Prime Minister ) and for .

Since June 2001 Bartoszewski had been the leader of the . On , on the occasion of the 60th anniversary of the liberation of the concentration camp Auschwitz-Birkenau, he delivered speeches as the representative of the Polish inmates of concentration camps. For many years he has been a strong supporter of the Polish-Jewish and Polish-German , and through his journalistic and academic activity he has contributed to retaining the memory of the Polish Underground State, the Warsaw Uprising and the crimes of .

From to , he was the leader of the board of Polish Airlines. He is the member of the .

He was also the chairman of the Polish Institute of International Affairs in Warsaw but resigned from the position on , due to no reaction from the then Minister of the Foreign Affairs and accusations formulated by deputy Minister of Defense (who alleged that most of hitherto Ministers of Foreign Affairs of the were former agents of the Soviet special services).

The article is the translation of its Polish version ( [http://pl.wikipedia.org/wiki/W%C5%82adys%C5%82aw_Bartoszewski Władysław Bartoszewski] ). This article is very inspiring, about a fantastic human being. However, a Polish to English translator needs to proofread it as the verb tenses are wrong throughout.