The L-DAX Index is an indicator of the German benchmark DAX index's performance after the Xetra electronic-trading system closes based on the floor trading at the Frankfurt Stock Exchange. The L-DAX Index basis is the "floor" trade (Parketthandel) at the Frankfurt stock exchange; it is computed daily between 09:00 and 17:30 Hours CET. The L-DAX index (Late DAX) is calculated from 17:30 to 20:00 CET. The Eurex, a European electronic futures and options exchange based in Zurich, Switzerland with a subsidiary in Frankfurt, Germany, offers options (ODAX) and Futures (FDAX) on the DAX from 08:00 to 22:00 CET.

A list of the current DAX companies, as of the quarterly review effective on 21 June 2010 where Salzgitter was replaced by HeidelbergCement.[3] The index was left unchanged at the September and December 2010, March, June and September 2011 reviews. 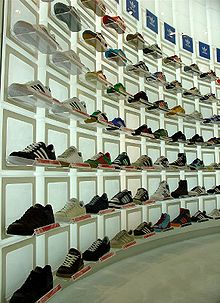 A display of Adidas shoes.

Inside a branch of Metro's Real hypermarket chain in Würzburg. 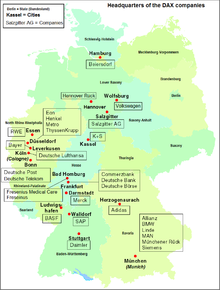 The headquarters of the DAX companies

Following table lists the former components of DAX and the ones replaced them.