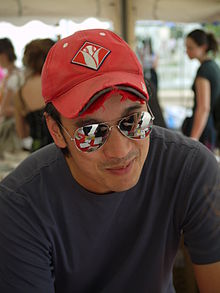 Nam Le in autograph session at the Comédie du Livre of Montpellier in France, in 2010.
Not to be confused with Nam Le (poker player).

Nam Le (born 1978)[1] is a Vietnamese-born Australian writer, who won the Dylan Thomas Prize for his book The Boat, a collection of short stories.[2] His stories have been published in many places including Best Australian Stories 2007, Best New American Voices, Zoetrope: All-Story, A Public Space and One Story.

Nam Le came to Australia from Vietnam with his parents, when he was less than a year old, as a boat refugee.[3][4] He went to Melbourne Grammar School and the University of Melbourne, from where he graduated with a BA (Hons) and LLB (Hons). His Arts thesis supervisor was the Australian poet Chris Wallace-Crabbe.[1] He worked as a corporate lawyer and was admitted to the Supreme Court of Victoria in 2003/2004.[1]

However, he decided to turn to writing, and in 2004 attended the Iowa Writers' Workshop in the United States of America where he completed a Masters in Creative Writing. He became fiction editor at the Harvard Review.[3] His first short story was published in Zoetrope in 2006. Nam Le also held fellowships at the Fine Arts Work Center in Provincetown in 2006, and at the Phillips Exeter Academy, in 2007.[1][3]

In an interview on Australian ABC radio, he said he turned from law to writing due to his love of reading: "I loved reading, and if you asked me why I decided to become a writer, that's the answer right there, because I was a reader and I was just so enthralled and thrilled by the stuff that I'd read that I just thought; what could be better? How could you possibly better spend your time than trying to recreate that feeling for other people".[5] In the same interview he said that his first writing was poetry.

He returned to Australia in 2008, but is moving to Great Britain to take up a writing fellowship at the University of East Anglia.[3]

When asked about his source of inspiration, Nam Le said in 2008 that "I’d say I’m most inspired by my parents for the choices and sacrifices they’ve made. It still boggles me".[4]

Regarding his style, Nam Le said in an interview that "one of the demarcations is writers that deal primarily with language, the more lyrical minded writers, and writers that are more structurally oriented. I always used to...I started out writing poetry and reading poetry, and so I always knew that that was the side that I was most predisposed to, and so I actually had to be quite careful in these stories to not overdo that impulse, to not throw too many images or indulge too many lyrical flights of fancy."[5]

The book, first published in 2008, comprises seven short stories which take the reader to such places as Colombia, New York City, Iowa, Tehran, Hiroshima, and small-town Australia. In the opening story, Love and Honor and Pity and Pride and Compassion and Sacrifice, he writes about a Vietnamese-born character called Nam Le who is attending a writing workshop in Iowa. In a conversation with Michael Williams he said about the practice of using a narrator close to "self" in a story:

A lot of people presume if I'm writing a narrator who has clear parallels to me, that's just sheer inertia; that there's a natural adaptation from so-called life to so-called text. But any careful reader or writer would understand how much artifice and contrivance go into making this self-standing and self-contained. Actually it's tougher: if I stick in something that has more resonance for me than is communicated on the page, then that's a failure of my charge as a writer . . . I'm not creating a good enough space for the reader to come in and fully partake in that scene or that language or that line."[1]

Each story provides "a snapshot of a pivotal point in the characters' lives".[6]

Nam Le has said of his Vietnamese heritage and writing that:

My relationship with Vietnam is complex. For a long time I vowed I wouldn’t fall into writing ethnic stories, immigrant stories, etc. Then I realized that not only was I working against these expectations (market, self, literary, cultural), I was working against my kneejerk resistance to such expectations. How I see it now is no matter what or where I write about, I feel a responsibility to the subject matter. Not so much to get it right as to do it justice. Having personal history with a subject only complicates this — but not always, nor necessarily, in bad ways. I don’t completely understand my relationship to Vietnam as a writer. This book is a testament to the fact that I’m becoming more and more okay with that.[4]