Compton Dando is a small village and civil parish on the River Chew in the Chew Valley in England. It is in the District of Bath and North East Somerset and ceremonial county of Somerset, and lies 7 miles (11.3 km) from Bristol, 8 miles (12.9 km) from Bath, and 3 miles (4.8 km) from Keynsham. The parish has a population of 613.[1]

The parish includes the villages of Burnett and Queen Charlton, where there is a 12th century Church of St Margaret. It has been designated by English Heritage as a Grade II* listed building.[2] There is a late medieval cross on the village green.[3]

It is on the route of the ancient Wansdyke,[4] and lies on the Monarch's Way long-distance footpath.

According to Robinson it is listed in the 1086 Domesday Book as Comtuna. A compton was originally a 'valley enclosure'. In 1297 the name Dando was added after Godfrey or Geofrey de Anno.[5]

The parish of Compton Dando was part of the Keynsham Hundred,[6]

The village was held by Alexander de Alno in the 12th century.

The parish council has responsibility for local issues, including setting an annual precept (local rate) to cover the council’s operating costs and producing annual accounts for public scrutiny. The parish council evaluates local planning applications and works with the local police, district council officers, and neighbourhood watch groups on matters of crime, security, and traffic. The parish council's role also includes initiating projects for the maintenance and repair of parish facilities, such as the village hall or community centre, playing fields and playgrounds, as well as consulting with the district council on the maintenance, repair, and improvement of highways, drainage, footpaths, public transport, and street cleaning. Conservation matters (including trees and listed buildings) and environmental issues are also of interest to the council. 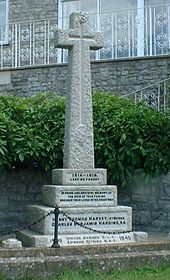 Compton Dando is part of the Farmborough Ward which is represented by one councillor on the unitary authority of Bath and North East Somerset which was created in 1996, as established by the Local Government Act 1992. It provides a single tier of local government with responsibility for almost all local government functions within its area including local planning and building control, local roads, council housing, environmental health, markets and fairs, refuse collection, recycling, cemeteries, crematoria, leisure services, parks, and tourism. They are also responsible for education, social services, libraries, main roads, public transport, trading standards, waste disposal and strategic planning, although fire, police and ambulance services are provided jointly with other authorities through the Avon Fire and Rescue Service, Avon and Somerset Constabulary and the Great Western Ambulance Service.

Bath and North East Somerset's area covers part of the ceremonial county of Somerset but it is administered independently of the non-metropolitan county. Its administrative headquarters is in Bath. Between 1 April 1974 and 1 April 1996, it was the Wansdyke district and the City of Bath of the county of Avon.[7] Before 1974 that parts of the parish was part of the Bathavon Rural District[8] and Keynsham Urban District.[9]

The parish is represented in the House of Commons of the Parliament of the United Kingdom as part of North East Somerset. It elects one Member of Parliament (MP) by the first past the post system of election. It is also part of the South West England constituency of the European Parliament which elects seven MEPs using the d'Hondt method of party-list proportional representation.

The church, dedicated to St Mary, is a small edifice in the Gothic style, with a square tower. It has a date of 1735 on the chancel, but is mostly Victorian,[11] although Wade and Wade in their 1929 book Somerset suggest "The church is of 14th-cent. workmanship, but the chancel and S. porch respectively bear the dates 1793 and 1735 (probably referring to repairs). Within is a piscina and Norm. font. The churchyard contains a good sundial."[12] It is a Grade II listed building.[13]

The 16th-century Manor House is a Grade II* listed building.[14] 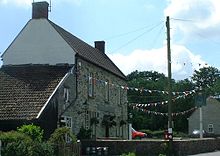 The author Dick King-Smith lived in Queen Charlton until his death in 2011.[15]