The Oda clan (織田氏, Oda-shi?) was a family of Japanese daimyo who were to become an important political force in the unification of Japan in the mid-16th century. Though they had the climax of their fame under Oda Nobunaga and fell from the spotlight soon after, several branches of the family would continue on as daimyo houses until the Meiji Restoration.

The Oda family in the time of Nobunaga claimed descent from the Taira clan, by Taira no Chikazane, a grandson of Taira no Shigemori (1138–1179).

Taira no Chikazane established himself at Oda (Echizen Province) and took its name. His descendants, great vassals of the (Seiwa Genji) Shiba clan, shugo (governors) of Echizen, Owari and other provinces, followed the latter to Owari Province and received Inuyama Castle in 1435. This castle was built towards 1435, by Shiba Yoshitake who entrusted its safety to the Oda family. The Oda had been shugo-dai (vice-governor) for several generations.

In 1452, after the death of Shiba Yoshitake the vassals of the Shiba, like the Oda in Owari Province and the Asakura clan in Echizen Province, refused the succession of Shiba Yoshitoshi (1430–1490) and supported Shiba Yoshikado (died ca. 1480), and began to divide the large domains of their suzerains among themselves, and had become gradually independent in the domains which had been confided to them. In 1475, the Oda had occupied the greater portion of Owari Province, but the Shiba would continue to try to regain authority until Shiba Yoshikane (1540–1600), who had to leave Owari.

The other famous castle of the Oda is Kiyosu Castle, built between 1394 and 1427 by Shiba Yoshishige who entrusted the castle to the Oda clan, and named Oda Toshisada vice-governor of the province. Toshisada had four sons. The fourth son, Nobusada, who lived in Katsubata Castle, was the father of Nobuhide and the grandfather of Oda Nobunaga.

Nobuhide took Nagoya Castle in 1525 (it was given to Nobunaga in 1542), and built Furuwatari Castle. Oda Nobutomo held Kiyosu Castle, but he was besieged and killed in 1555 by his nephew Oda Nobunaga who operated from Nagoya Castle. This led to the family being divided into several branches, until the branch led by Oda Nobunaga eclipsed the others and unified its control over Owari.

Then turning to neighboring rivals, it one by one achieved dominance over the Imagawa, Takeda, Azai, Asakura and other clans, until Nobunaga held control over central Japan. However, Nobunaga's plans for national domination were thwarted when he fell victim to the treachery of his vassal Akechi Mitsuhide who killed him at the Incident at Honnō-ji in the summer of 1582. The Oda remained titular overlords of central Japan for a short time, before being eclipsed by the family of one of Nobunaga's chief generals, Hashiba Hideyoshi.

Though the Oda were effectively eclipsed by Toyotomi Hideyoshi following Nobunaga's death, it is not often known that the Oda continued to be a presence in Japanese politics. One branch of the family became hatamoto retainers to the Tokugawa shōgun, while other branches became minor daimyo lords. As of the end of the Edo era, these included Tendo han (also known as Takahata han; Dewa Province, 20,000 koku), Yanagimoto han (Yamato Province, 10,000 koku), Kaiju han (also known as Shibamura han; Yamato Province, 10,000 koku), and Kaibara han (Tanba Province, 20,000 koku).

During the reign of the daimyo Nobutoshi, the Oda of Tendo Domain were signatories to the pact that created the Ōuetsu Reppan Dōmei.

Living descendants of the Oda Clan are currently in southern and south-western Japan, as well as Taiwan, The Philippines, South Korea, USA, Canada and the United Kingdom, mostly retained their Japanese descend through Japanese/Chinese/Taiwanese/Filipino line. 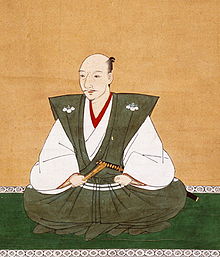 Oda Nobunaga, the most famous member of the clan

This article incorporates text from OpenHistory.