For lists of battles organized by campaign and theater, see:

Some battles have more than one name; e.g., Antietam vs. Sharpsburg or Bull Run vs. Manassas. A complete list appears in the article Naming the American Civil War. 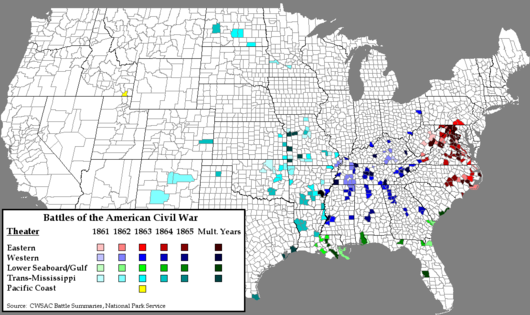 The American Battlefield Protection Program (ABPP) was established within the United States National Park Service to classify the preservation status of historic battlefield land. In 1993, the Civil War Sites Advisory Commission (CWSAC) reported to Congress and the ABPP on their extensive analysis of significant battles and battlefields. Of the estimated 8,000 occasions in which hostilities occurred in the American Civil War, this table and related articles describe the 384 battles that were classified in CWSAC's Report on the Nation's Civil War Battlefields. In addition to the status of battlefield land preservation (not included in this table) CWSAC rated the military significance of the battles into four classes, as follows:[1]

Other non-Indian wars battles and skirmishes not rated by CWSAC.

Other battles in the Indian Wars

Other battles and skirmishes, not rated by CWSAC, of the Indian Wars between either USA or CSA forces and the Apache, Arapaho, Cheyenne, Comanche, Dakota, Kiowa, Navajo, and Shoshone which occurred during the American Civil War – including: the Apache Wars, Colorado War, Dakota War of 1862, and Navajo Wars.

This is a chronological summary and record of every engagement between the troops of the Union and of the Confederacy, showing the total losses and casualties in each engagement. It was collated and compiled from the Official Records of the War Department.

This summary has been divided by year: