Applied kinesiology
This article is about a chiropractic or an alternative medicine method. For other uses, see Kinesiology (disambiguation).

Applied kinesiology (AK) is an alternative medicine method used for diagnosis and determination of therapy. According to practitioners using Applied Kinesiology techniques, it provides feedback on the functional status of the body. AK is a practice within the realm of alternative medicine and is different from "kinesiology," which is the scientific study of human movement. AK has been criticized on theoretical and empirical grounds,[1] and characterized as pseudoscience[2] and quackery.[1] In Britain, the National Institute for Clinical Excellence recently ruled that it is unproven and advised against its use in allergy diagnosis.[3]

History and current use

In 1964, George J. Goodheart invented Applied Kinesiology through his unique interpretation and application of Muscles: Testing and Function written by two physical therapists Kendall and Kendall.[4]

George J. Goodheart, a chiropractor, originated AK in 1964[5] and began teaching it to other chiropractors.[6] An organization of Goodheart Study Group Leaders began meeting in 1973, selected the name "The International College of Applied Kinesiology" (ICAK) in 1974, adopted bylaws in 1975, elected officers in 1975, and "certified" its charter members, called "diplomates" in 1976.[7] ICAK now considers 1976 to be the date it was founded and 1973 to be the date that its first chairman took office.[8]

While it is primarily used by chiropractors, it is now also used by a number of other practitioners.[9] In 2003 it was the 10th most frequently used chiropractic technique in the United States, with 37.6% of chiropractors employing this method and 12.9% of patients being treated with it,[10] and has also been used by naturopaths, medical doctors, dentists, nutritionists, physical therapists, massage therapists, and nurse practitioners. Some basic AK based techniques have also been used/misused by nutritional supplement distributors, including multilevel distributors.[9][11] 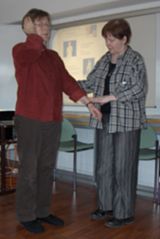 Applied kinesiology is presented as a system that evaluates structural, chemical, and mental aspects of health by using a method referred to as manual muscle testing alongside conventional diagnostic methods. The essential premise of applied kinesiology that is not shared by mainstream medical theory is that every organ dysfunction is accompanied by a weakness in a specific corresponding muscle, the viscerosomatic relationship.[11][12] Treatment modalities relied upon by practitioners include joint manipulation and mobilization, myofascial, cranial and meridian therapies, clinical nutrition, and dietary counseling.[13]

A manual muscle test in AK is conducted by having the patient resist using the target muscle or muscle group while the practitioner applies a force. A smooth response is sometimes referred to as a "strong muscle" and a response that was not appropriate is sometimes called a "weak response". This is not a raw test of strength, but rather a subjective evaluation of tension in the muscle and smoothness of response, taken to be indicative of a difference in spindle cell response during contraction. These differences in muscle response can be indicative of various stresses and imbalances in the body.[14] A weak muscle test is equated to dysfunction and chemical or structural imbalance or mental stress, indicative of suboptimal functioning.[15] It may be suboptimal functioning of the tested target muscle, or a normally optimally functioning muscle can be used as an indicator muscle for other physiological testing. A commonly known and very basic test is the arm-pull-down test, or "Delta test," where the patient resists as the practitioner exerts a downward force on an extended arm.[4] Proper positioning is paramount to ensure that the muscle in question is isolated or positioned as the prime mover, minimizing interference from adjacent muscle groups.[12]

"Nutrient testing" is used to examine the response of various of a patient's muscles to assorted chemicals. Gustatory and olfactory stimulation are said to alter the outcome of a manual muscle test, with previously weak muscles being strengthened by application of the correct nutritional supplement, and previously strong muscles being weakened by exposure to harmful or imbalancing substances or allergens.[12][14][16] Though its use is deprecated by the ICAK,[17] stimulation to test muscle response to a certain chemical is also done by contact or proximity (for instance, testing while the patient holds a bottle of pills). Studies of AK for nutrient or allergy testing have had positive and negative conclusions (see "Scientific Research" below.)

"Therapy localization" is another diagnostic technique using manual muscle testing which is unique to applied kinesiology. The patient places a hand which is not being tested on the skin over an area suspected to be in need of therapeutic attention. This fingertip contact may lead to a change in muscle response from strong to weak or vice versa when therapeutic intervention is indicated. If the area touched is not associated with a need for such intervention, the muscle response is unaffected.[15]

As with many concepts considered pseudoscientific, there is debate around the nature and quality of evidence supporting applied kinesiology, with proponents claiming support from some published papers and critics noting other research which fails to show efficacy. One review of the literature identified methodological problems with previous AK studies[18]

Studies supporting AK have been published in respect of food allergies and antibodies for those foods,[19] and a blinded study where the response of a calf muscle to an inhibitory reflex technique used in AK was studied using graphical recordings of electromyography and mechanical parameters, finding that with good coordination between the examiner and subject, muscle inhibition was easily recorded.[20]

Other studies have failed to show clinical efficacy. For example, in some studies muscle testing has not been shown to distinguish a test substance from a placebo under double-blind conditions, and the use of applied kinesiology to evaluate nutrient status was not shown to be more effective than random guessing. Some scientific studies have shown that applied kinesiology tests were not reproducible.[21][22][23][24][25]

A review of several scientific studies of AK-specific procedures and diagnostic tests concluded that "When AK is disentangled from standard orthopedic muscle testing, the few studies evaluating unique AK procedures either refute or cannot support the validity of AK procedures as diagnostic tests. The evidence to date does not support the use of [manual muscle testing] for the diagnosis of organic disease or pre/subclinical conditions."[26] Another concluded that "There is little or no scientific rationale for these methods. Results are not reproducible when subject to rigorous testing and do not correlate with clinical evidence of allergy."[27] A double-blind study was conducted by the ALTA Foundation for Sports Medicine Research in Santa Monica, California and published in the June 1988 Journal of the American Dietetic Association. The study used 3 experienced AK practitioners and concluded that, "The results of this study indicated that the use of Applied Kinesiology to evaluate nutrient status is no more useful than random guessing."[28]

Despite more than four decades of review, RCT (random control trials) and other evaluative methods, even invested researchers delivered the following opinion;

One shortcoming is the lack of RCTs to substantiate (or refute) the clinical utility (efficacy, effectiveness) of chiropractic interventions based on MMT findings. Also, because the etiology of a muscle weakness may be multifactorial, any RCT that employs only one mode of therapy to only one area of the body may produce outcomes that are poor due to these limitations.[29]

Some of the studies, research and reviews of applied kinesiology mentioned above are listed at the National Library of Medicine and National Institutes of Health.[23][24][28][30][31][32][33]

Nearly all AK tests are subjective, relying solely on practitioner assessment of muscle response. Specifically, some studies have shown test-retest reliability, inter-tester reliability, and accuracy to have no better than chance correlations.[11][24][34] Some skeptics have argued that there is no scientific understanding of the proposed underlying theory of a viscerosomatic relationship, and the efficacy of the modality is unestablished in some cases and doubtful in others.[11][16] Skeptics have also dismissed AK as "quackery," "magical thinking," and a misinterpretation of the ideomotor effect.[1][35] It has also been criticized on theoretical and empirical grounds,[1] and characterized as pseudoscience.[2] With only anecdotal accounts providing positive evidence for the efficacy of the practice, a review of peer-reviewed studies concluded that the "evidence to date does not support the use of [AK] for the diagnosis of organic disease or pre/subclinical conditions."[26]

According to the American Chiropractic Association, in 2003 Applied Kinesiology was the 10th most frequently used chiropractic technique in the United States, with 37.6% of chiropractors employing this method and 12.9% of patients being treated with it.[10]

"This is an approach to chiropractic treatment in which several specific procedures may be combined. Diversified/manipulative adjusting techniques may be used with nutritional interventions, together with light massage of various points referred to as neurolymphatic and neurovascular points. Clinical decision-making is often based on testing and evaluating muscle strength."[6]