The internal classification of the Romance languages is a complex and sometimes controversial topic which may not have a unique answer. Several classifications have been proposed, based on different criteria.

In spite of their common origin, the descendants of Vulgar Latin have many differences. These occur at all levels, including the sound systems, the orthography, the nominal, verbal, and adjectival inflections, the auxiliary verbs and the semantics of verbal tenses, the function words, the rules for subordinate clauses, and, especially, in their vocabularies. While most of those differences are clearly due to independent development after the breakup of the Roman Empire (including invasions and cultural exchanges), one must also consider the influence of prior languages in territories of Latin Europe that fell under Roman rule, and possible heterogeneity in Vulgar Latin itself.

Romanian, together with other related languages, like Aromanian, has a number of grammatical features which are unique within Romance, but are shared with other non-Romance languages of the Balkans, such as Albanian, Bulgarian, Greek, Macedonian, Serbo-Croatian, Slovene and Turkish. These include, for example, the structure of the vestigial case system, the placement of articles as suffixes of the nouns (cer = "sky", cerul = "the sky"), and several more. This phenomenon, called the Balkan linguistic union, may be due to contacts between those languages in post-Roman times.

Some Romance languages form plurals by adding /s/ (derived from the plural of the Latin accusative case), while others form the plural by changing the final vowel (by influence of Latin nominative plural endings, such as /i/) from some masculine nouns.

Although the Latin word for "nothing" is nihil, the common word for "nothing" became nudda /nuɖːa/ in Sardinian, nada in Spanish, Portuguese, and Galician (Galician also has the word "ren"), rien in French, res in Catalan, cosa and res in Aragonese, ren in Occitan, nimic in Romanian, nagut in Romansh, and niente and nulla in Italian, gnente in Venetian and Piedmontese (but the Piedmontese negative adverb nen cames from NE-Ente, being gnente borrowed from Italian), gnent and nagott in Lombard, and nue and nuie in Friulian. Some argue that all three roots derive from different parts of a Latin phrase nullam rem natam ("no thing born"), an emphatic idiom for "nothing". Meanwhile, Italian and Venetian niente and gnente would seem to be more logically derived from Latin ne(c) entem ("no being").[citation needed][original research?]

Romanian constructs the names of the numbers 11–19 by a regular Slavic-influenced pattern which could be translated as "one-over-ten", "two-over-ten", etc.. All the other Romance languages use a pattern like "one-ten", "two-ten", etc. for 11–15, and the pattern "ten-and-seven, "ten-and-eight", "ten-and-nine" for 17–19. For 16, however, they split into two groups: some use "six-ten", some use "ten-and-six":

Classical Latin uses the "one-ten" pattern for 11–17 (ūndecim, duodecim, ..., septendecim), but then switches to "two-off-twenty" (duodēvigintī) and "one-off-twenty" (ūndēvigintī). For the sake of comparison, note that English and German use two special words derived from "one left over" and "two left over" for 11 and 12, then the pattern "three-ten", "four-ten", ..., "nine-ten" for 13–19.

To have and to hold

The verbs derived from Latin habēre "to have", tenēre "to hold", and esse "to be" are used differently in the various Romance languages, to express possession, to construct perfect tenses, and to make existential statements ("there is"). If we use T for tenēre, H for habēre, and E for esse, we have the following distribution:

Ancient Galician-Portuguese used to employ the auxiliary H for permanent states, such as Eu hei um nome "I have a name" (i.e. for all my life), and T for non-permanent states Eu tenho um livro "I have a book" (i.e. perhaps not so tomorrow), but this construction is no longer used in modern Galician and Portuguese. Informal Brazilian Portuguese uses the T verb even in the existential sense, e.g. Tem água no copo "There is water in the glass". In most languages, the descendant of tenēre still has the sense of "to hold", as well, e.g. Italian tieni il libro, French tu tiens le livre, Catalan tens el llibre, Romanian ține cartea, Friulian Tu tu tegnis il libri "You're holding the book". In others, like Portuguese, this sense has been mostly lost, and a different verb is currently used for "to hold". Romansh uses, besides igl ha, the form i dat (literally: it gives), borrowed from German es gibt.

To have or to be

Some languages use their equivalent of 'have' as an auxiliary verb to form the compound forms (e. g. French passé composé) of all verbs; others use 'be' for some verbs and 'have' for others.

In the latter type, the verbs which use 'be' as an auxiliary are unaccusative verbs, that is, intransitive verbs that often show motion not directly initiated by the subject or changes of state, such as 'fall', 'come', 'become'. All other verbs (intransitive unergative verbs and all transitive verbs) use 'have'. For example, in French, J'ai vu or Italian ho visto 'I have seen' vs. Je suis tombé, sono caduto 'I have (lit. am) fallen'. Note, however, the difference between French and Italian in the choice of auxiliary for the verb 'be' itself: Fr. J'ai été 'I have been' with 'have', but Italian sono stato with 'be'. In Southern Italian languages the principles governing auxiliaries can be quite complex, including even differences in persons of the subject. A similar distinction exists in the Germanic languages, which share a linguistic union[citation needed]; German and the Scandinavian languages use "have" and "be", while modern English now uses 'have' only (although see older usages, such as Christ is risen, Joy to the world; the Lord is come.
"Be" is also used for reflexive forms of the verbs, as in French j'ai lavé 'I washed [something]', but je me suis lavé 'I washed myself', Italian ho lavato 'I washed [something]' vs. mi sono lavato 'I washed myself'. 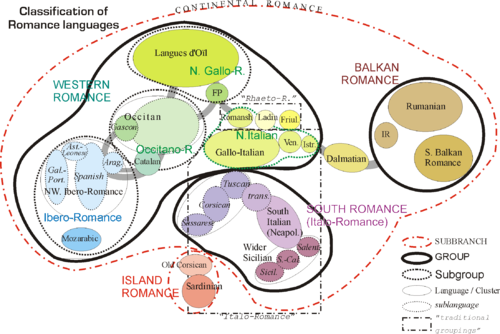 The comparative method which is used by linguists to build family language trees is based on the assumption that the member languages evolved from a single proto-language by a sequence of binary splits, separated by many centuries. With that hypothesis, and the glottochronological assumption that the degree of linguistic change is roughly proportional to elapsed time, the sequence of splits can be deduced by measuring the differences between the members.

However, the history of Romance languages, as we know it, makes the first assumption rather problematic. While the Roman Empire lasted, its educational policies and the natural mobility of its soldiers and administrative officials probably ensured some degree of linguistic homogeneity throughout its territory. Even if there were differences between the Vulgar Latin spoken in different regions, it is doubtful whether there were any sharp boundaries between the various dialects. On the other hand, after the Empire's collapse, the population of Latin speakers was separated — almost instantaneously, by the standards of historical linguistics — into a large number of politically independent states and feudal domains, whose populations were largely bound to the land. These units then interacted, merged and split in various ways over the next fifteen centuries, possibly influenced by languages external to the family (as in the so-called Balkan linguistic union). To sum it up, the history of Latin and Romance speaking peoples can hardly be described by a binary branching pattern; therefore, one may argue that any attempt to fit the Romance languages into a tree structure is inherently flawed.[1]

On the other hand, the tree structure may be meaningfully applied to any subfamilies of Romance whose members did diverge from a common ancestor by binary splits. That may be the case, for example, of the dialects of Spanish and Portuguese spoken in different countries, or the regional variants of spoken standard Italian (but not the so-called "Italian dialects", which are distinct languages evolved directly from Vulgar Latin).

Nevertheless, by applying the comparative method, some linguists have concluded that the earliest split in the Romance family tree was between Sardinian and the remaining group, called Continental Romance. Among the many peculiar Sardinian distinguishing features are its articles (derived from Latin IPSE instead of ILLE) and retention of the "hard" sounds of "c" and "g" before "e" and "i".

According to this view, the next split was between Romanian in the east, and the other languages (Italo-Western branch) in the west. One of the characteristic features of Romanian is its retention of three of Latin's seven noun cases. The third major split was more evenly divided, between the Italian branch, which comprises many languages spoken in the Italian peninsula, and the Gallo-Iberian branch.

However, this is not the only view. Another common classification begins by splitting the Romance languages into two main branches, East and West. The East group includes Romanian, the languages of Corsica and Sardinia, and all languages of Italy South of a line through the cities of Rimini and La Spezia. (see La Spezia-Rimini Line.) Languages in this group are said to be more conservative, i.e. they retained more features of the original Latin.

The latter then split into a Gallo-Romance group, which became the Oïl languages (including French), Gallo-Italian, Occitan, Francoprovençal and Romansh, and an Iberian Romance group which became Spanish and Portuguese. Catalan is considered by many specialists[who?] as a transition language between the Gallic group and the Iberian group, since it shares characteristics from both groups; for example, "fear" is medo/pavor/temor in Portuguese, miedo/pavor/temor in Spanish, (from metus, pavore and timor), in Catalan por/paüra/temor; but peur/crainte in French and paura in Italian.

Other linguists[who?] claim that the various regional languages did not evolve in isolation from their neighbours; on the contrary, they see many changes propagating from the more central regions (Italy and France) towards the periphery (Iberian Peninsula and Romania).

The classification within is largely based on the analysis provided at ethnologue.com. The Ethnologue classification (produced by the SIL International) is at one extreme of linguists, who divide into 'splitters' and 'lumpers'. Ethnologue produce a very detailed classification, which is more precise than many other linguists[who?] would accept, but it is valuable as a description of varieties.

Degree of separation from Latin

It is sometimes claimed[who?] that this or that Romance language has remained closer to classical Latin than the others. However, such evaluations are largely subjective, as they depend on how much weight one assigns to specific features. In fact all Romance languages are vastly different from their common ancestor, more so than from each other[citation needed].