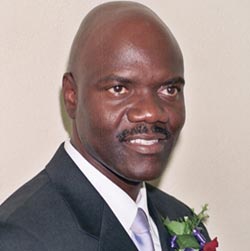 Mutambara was a noted leader of the student movement within Zimbabwe in 1988 and 1989, leading anti-government protests at the which led to his arrest and imprisonment. He was later educated on a at Merton College, Oxford in the where he obtained a in and Mechatronics, and in the where he spent time as a visiting Fellow [MLK Visiting Professors welcomed",http://web.mit.edu/newsoffice/2000/mlk-1213.html ] in the same field, including both , and . He also worked as a Professor of Business Strategy and as a consultant for .

In 2005 the MDC split into two factions following a dispute over whether or not to participate in the March 2005 parliamentary election. While MDC leader , Mutambara, and others opposed participation, and led a faction that favored participation. Those supporting the senate elections won narrowly against the leader Morgan Tsvangirai's vote.Mr Tsvangirai later overruled & overturned the decision of the plebiscite citing two absent members had sent in postal votes that canceled the slender margin.

In February 2006 at a Congress of the breakaway faction Movement for Democratic Change Mutambara was elected as President of the party. Commenting on the election, Mutambara said, "My position was that the MDC should have boycotted those Senate elections. I guess then that makes me the anti-Senate leader of the pro-Senate MDC faction. How ridiculous can we get? That debate is now in the past, let us move on and unite our people."

The choice of Mutambara as leader was said to have been inspired by the fact that he is a Shona whereas Sibanda and Ncube are both Ndebele, but realized that only a Shona candidate could win an election across the whole of Zimbabwe. Mutambara is not a member of the House of Assembly and is therefore untainted by struggles within it.

The faction led by Tsvangirai described Mutambara's election as a nullity. In his MDC faction presidential acceptance speech,

Mutambara was arrested by the Zimbabwe police on 19 May 2006 while leading a march in support of his faction's candidate on the eve of the Budiriro by-election. He was also arrested on the 11 March together with the other MDC leaders from the other faction. He was released without charge two days later, only to be re-arrested on 18 March at Harare Airport enroute to South Africa, where his family is still based, and where he is also a leading consultant. He was also released without charge after three days in custody.

After Mutambara and Tsvangirai failed to unite on a single MDC candidate for the March 2008 presidential election, Mutambara said on 15 February that he would not run for President and that his faction would instead back . [Fikile Mapala, [http://www.newzimbabwe.com/pages/electoral155.17759.html "Mutambara withdraws from race, backs Makoni"] , newzimbabwe.com, 15 February 2008.] Mutambara instead ran in the concurrent parliamentary election for a seat from the Zengeza East constituency, but he was placed third, with 1,322 votes, according to official results, behind the candidate of the Tsvangirai faction, who won 7,570 votes, and the ZANU-PF candidate, who won 3,042 votes. [ [http://www.sokwanele.com/election2008/constituency Results page for Zengeza East] at sokwanele.com.]

The Tsvangirai faction won 99 seats in the parliamentary election and the Mutambara faction won 10, compared with 97 for ZANU-PF.

On September 15, 2008, the leaders of the 14-member witnessed the signing of a power-sharing agreement between the two MDC factions and ZANU-PF. Under the deal, Mugabe will remain President, Tsvangirai will become Prime Minister, [ [http://edition.cnn.com/2008/WORLD/africa/09/15/zimbabwe.powershare/?iref=mpstoryview edition.cnn.com, Rivals sign Zimbabwe power-share deal] ] the MDC will control the police, ZANU-PF will control the Army, and Mutambara will become Deputy Prime Minister. [ [http://www.timesonline.co.uk/tol/news/world/africa/article4756995.ece timesonline.co.uk, Power-sharing deal signed in Zimbabwe] ] [ [http://www.msnbc.msn.com/id/26715920/ www.msnbc.msn, Zimbabwe power-sharing deal signed] ]