An epoxide is a cyclic ether with three ring atoms. This ring approximately defines an equilateral triangle, which makes it highly strained. The strained ring makes epoxides more reactive than other ethers. Simple epoxides are named from the parent compound ethylene oxide or oxirane, such as in chloromethyloxirane. As a functional group, epoxides feature the epoxy prefix, such as in the compound 1,2-epoxycycloheptane, which can also be called cycloheptene epoxide, or simply cycloheptene oxide.

The chemical structure of the epoxide glycidol, a common chemical intermediate

A polymer containing unreacted epoxide units is called a polyepoxide or an epoxy. Epoxy resins are used as adhesives and structural materials. Polymerization of an epoxide gives a polyether, for example ethylene oxide polymerizes to give polyethylene glycol, also known as polyethylene oxide.

The dominant epoxides industrially are ethylene oxide and propylene oxide, which are produced respectively on the scales of approximately 15 and 3 million tonnes.[1] The epoxidation of ethylene involves its catalytic reaction of oxygen according to the following stoichiometry:

The direct reaction of oxygen with alkenes is useful only for this epoxide. Other alkenes fail to react usefully, even propylene.

The largest scale application of this approach is the production of propylene oxide from propylene using either t-butyl hydroperoxide or ethylbenzene hydroperoxide.[2] More typically for laboratory operations, the Prilezhaev reaction is employed.[3][4] This approach involves the oxidation of the alkene with a peroxyacid such as m-CPBA. Illustrative is the epoxidation of styrene with perbenzoic acid to styrene oxide:[5]

The reaction proceeds via what is commonly known as the "Butterfly Mechanism."[6] The peroxide is viewed as an electrophile, and the alkene a nucleophile. The reaction is considered to be concerted (the numbers in the mechanism below are for simplification). 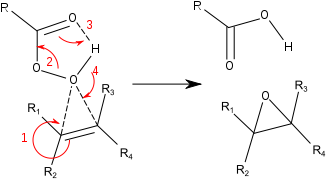 Hydroperoxides are also employed in catalytic enantioselective epoxidations, such as the Sharpless epoxidation and the Jacobsen epoxidation. In such cases, the oxygen is delivered from a metal oxide or peroxide. Together with the Shi epoxidation, these reactions are useful for the enantioselective synthesis of chiral epoxides. Oxaziridine reagents may also be used to generate epoxides from alkenes.

This method is a variant of the Williamson ether synthesis. In this case, an alkoxide ion displaces a chloride atom within the same molecule. The precursor compounds are called halohydrins. For example, with 2-chloropropanol:[7]

Approximately, half of the world's supply of propylene oxide arises via this route.[2] An intramolecular epoxide formation reaction is one of the key steps in the Darzens reaction.

In the Johnson-Corey-Chaykovsky reaction epoxides are generated from carbonyl groups and sulfonium ylides. In this reaction, a sulfonium is the leaving group instead of chloride.

Electron-deficient olefins, such as enones and acryl derivatives can be epoxidized using nucleophilic oxygen compounds such as peroxides. The reaction is a two-step mechanism. First the oxygen performs a nucleophilic conjugate addition to give a stabilized carbanion. This carbanion then attacks the same oxygen atom, displacing a leaving group from it, to close the epoxide ring.

The carbon atoms of an epoxide are approximately sp3-hybridized, and thus may be stereogenic positions. Depending on the mechanism of the reaction and the geometry of the alkene starting material, cis and/or trans epoxide diastereomers may be formed. In addition, if there are other stereocenters present in the starting material, they can influence the stereochemistry of the epoxidation relative to them. This diastereoselectivity is a form of "substrate control" of the reaction. Finally, epoxidizing agents that possess stereogenic structures can influence the stereochemistry of the epoxide product (see for example the Sharpless epoxidation, Jacobsen epoxidation, and Juliá-Colonna Epoxidation). This enantioselectivity is a form of "reagent control" of the reaction.

Typical epoxide reactions are listed below.

Perepoxides are epoxides with an additional oxygen atom attached to the epoxide-oxygen. They are isoelectronic and isostructural with the cyclic sulfoxides derived from episulfides. Perepoxides are proposed intermediates in the photosensitized oxidation of alkenes, as occurs when drying oils (a component of some paints and varnishes) are exposed to air in light. Such intermediates arise from the addition of singlet oxygen to the double bond. Perepoxides rapidly rearrange to allylic hydroperoxides.[3]