Occupation of Latvia by Nazi Germany

Occupation of Latvia by Nazi Germany 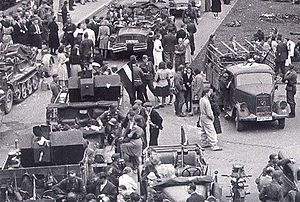 The occupation of Latvia by Nazi Germany was completed on July 10, 1941 by Germany's armed forces. Latvia became a part of Nazi Germany's Reichskommissariat Ostland — the Province General of Latvia (German: Generalbezirk Lettland). Anyone[citation needed] who opposed the German occupation, as well as those who had cooperated with the Soviet Union, were killed or sent to concentration camps.

Immediately after the establishment of German authority in the beginning of July 1941, the elimination of the Jewish and Roma population began, with a major mass killings taking place at Rumbula and elsewhere. The killings were committed by the Einsatzgruppe A, and the Wehrmacht. Latvian collaborators, including the 500–1,500 members of the Arājs Commando (which alone killed around 26,000 Jews[citation needed]) and other Latvian members of the SD, were also involved.[1][2] By the end of 1941, almost the entire Jewish population was exterminated. In addition, some 25,000 Jews were brought from Germany, Austria and the present-day Czech Republic, of whom around 20,000 were killed.[citation needed]

During the years of Nazi occupation, special campaigns killed 90,000 people in Latvia, approximately 70,000 of whom were Jews and 2,000 Gypsies.[citation needed] Those who were not Jews or Gypsies were mostly civilians whose political opinions and activity were unacceptable to the German occupiers. Jewish and Gypsy civilians were eliminated as a result of the Nazi "theory of races".

Many[citation needed] Latvians resisted the German occupation. Žanis Lipke risked his life to save more than 50 Jews. The Latvian resistance movement was divided between the pro-independence units under the Latvian Central Council and the pro-Soviet forces under the Central Staff of the Partisan Movement in Moscow. Their Latvian commander was Arturs Sproģis. The Latvian Central Council published the outlawed publication Brīvā Latvija (Free Latvia). The periodical promoted the idea of renewing democracy in Latvia after the war.

Conscription of Latvians by Nazi Germany

Nazi Germany conscripted Latvia's inhabitants in their armed forces. During World War II more than 200,000 Latvian soldiers ended up in the rank and file of both occupation forces; approximately half of them (100,000) were killed on the battlefield.

Latvians in the German and Soviet armies

The Soviet Union conscripted into its army sections of independent Latvia's military units, as well as those Latvians who had ended up in Russia as a result of previous wars or had originally lived there. Nazi Germany also mobilised former Latvian soldiers. Initially, volunteer recruitment campaigns were organised, but when these did not work, soldiers were forcibly conscripted into the SS "Volunteer" Legions. In 1943-1944, two divisions of Waffen SS were formed, largely from Latvian soldiers, to fight the Soviet army. In 1944, heavy fighting took place in Latvia between German and Soviet troops, with the USSR gaining the upper hand.

Defeat and retreat of Nazi forces

In 1944, the Red Army lifted the siege of Leningrad and re-conquered the Baltic area along with much of Ukraine and Belarus. Nazi Germany began to suffer regular defeats on the eastern front and was pushed back to the west. In mid-July 1944, the Soviet Army once again crossed Latvia's pre-war eastern border, and by October 13 had re-captured Riga. By mid October, the German Army, which partly included the "Latvian Legion", was besieged in Kurzeme, in the "Courland Pocket".

Some 200,000 German troops held out in Courland. They were trapped between the Baltic Sea and the Soviet lines while the Soviet Army concentrated on attacks in East Prussia, Silesia, Pomerania, and ultimately Berlin. Colonel-General Heinz Guderian, the Chief of the German General Staff, insisted that the troops in Courland be evacuated by sea and used for the defense of the Reich. However, Hitler refused and ordered the German forces in Courland to hold out. He believed them necessary to protect German submarine bases along the Baltic coast. On January 15, 1945, Army Group Courland (German: Heeresgruppe Kurland) was formed under Colonel-General Dr. Lothar Rendulic. Until the end of the war, Army Group Courland (including divisions such as the Latvian Freiwiliger SS Legion) successfully defended the area in which they were besieged. It held out until May 8, 1945, when Colonel-General Carl Hilpert, the army group's last commander, surrendered to Marshal Leonid Govorov. At this time, the group consisted of some 31 divisions of varying strength. Approximately 203,000 troops of Army Group Courland were deported to Soviet prison camps in the east after surrender on 9 May.

Many Latvians fled through this battlefield in fishing boats and ships to Sweden and Germany, from where they emigrated to various parts of the world, mostly Australia and North America. Approximately 150,000 Latvians ended up in exile in the West.

Aftermath of the Second World War

It is estimated that, as a result of the war, the population of Latvia decreased by between 300,000 to 500,000 (a 25% decrease compared to 1939). The war also heavily damaged the economy: many historic cities were destroyed, as well as industry and infrastructure.

As of 1940, most western governments did not recognise the incorporation of Latvia and the other Baltic States into the Soviet Union. The only exception was Sweden, which returned the members of the "Latvian Legion", who had ended up in Sweden at the end of the war, to the USSR, and handed the diplomatic representative offices of the Baltic countries in Stockholm to the USSR. After the war, the United States applied the most persistent pressure on the Soviet Union regarding the Baltic States' wish for independence. Throughout the entire period of occupation, the embassy of independent Latvia continued to function in Washington D.C.[citation needed]