The Battle of Mikatagahara (三方ヶ原の戦い, Mikatagahara no tatakai?) (January, 1573; Tōtōmi Province, Japan) was one of the most famous battles of Takeda Shingen's campaigns, and one of the best demonstrations of his cavalry-based tactics.

In October 1572, after having concluded alliances with his rivals to the east (the Late Hōjō clan of Odawara and the Satomi clan of Awa), and after waiting for the snow to close off the northern mountain passes against his northern rival, Uesugi Kenshin, Takeda Shingen led an army of 20,000 men south from his capital of Kofu into Tōtōmi Province, while one of his generals led a second force of 5,000 men into eastern Mikawa Province. Shingen was opposed by Tokugawa Ieyasu, based at Hamamatsu Castle with 8,000 men, plus an additional 3,000 reinforcements received from his ally, Oda Nobunaga. However, Takeda’s intent was not to attack Ieyasu or to seize Hamamatsu; rather, he wished to avoid conflict if possible to save his forces to destroy Nobunaga and to march on Kyoto. [1].

Against the advice provided by Sakuma Nobumori, Hiraide Norihide and Takigawa Kazumasa, who had been sent by Nobunaga, and by his own generals, Torii Motohiro, Ogasawara Nagayoshi, Matsudaira Ietada, Honda Tadakatsu and Ishikawa Kazemasa, Ieyasu refused to allow the Takeda army to pass through his territory unhindered, and drew up his forces on a high plain called Mikatagahara, just north of Hamamatsu. According to the Kōyō Gunkan, the contemporary Takeda military history, Shingen outnumbered Ieyasu three-to-one, and organized his men in the gyorin (魚鱗, fish-scale) formation, enticing his opponent to attack. Ieyasu's troops were arranged in a line, so they could make the best use of their arquebusiers.

At around four in the afternoon, snow began to fall, and the arquebusiers opened fire, along with a number of peasant stone-throwers. Firearms being new to Japanese warfare, were an unbalancing factor and Ieyasu may have expected his superior weaponry to defeat Shingen's tactical attempts. However, Shingen then let loose his famous cavalry charge; his horsemen raced towards the gunners, and overran them. The Tokugawa forces on stood firm on the left flank despite many casualties, the allies provided by Nobunaga were overwhelmed, with Hiraide killed, and Takigawa and Sakuma fleeing the battle. [2]

Shingen then withdrew his forward troops, offering them an opportunity to rest, and brought forward a new set of horsemen initiated a new charge, led by Takeda Katsuyori and Obata Masamori. They were soon joined by the main body of the Takeda army, which drove the Tokugawa into full retreat. Ieyasu sent one of his commanders, Ōkubo Tadayo, to plant his giant golden fan standard (uma-jirushi) to serve as a rallying point at Saigadake, where the high plains began to drop off. He then sought to re-engage the Takeda army, to free his trapped generals, but was persuaded by Natsume Yoshinobu to retreat; as head of the Tokugawa clan, Ieyasu's life was too important. Yoshinobu then led a charge into the Takeda line, and was killed. 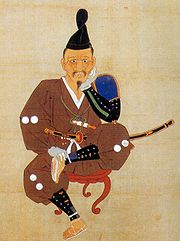 Tokugawa Ieyasu after his defeat at Mikatagahara.

When Tokugawa returned to Hamamatsu Castle, he was accompanied by only five men. The town was on verge of panic as rumor had already reached Hamamatsu that the battle had gone badly.[3] Nevertheless, Ieyasu commanded that the castle gates remain open, and that braziers be lit to guide his retreating army back to safety. Sakai Tadatsugu beat a large war drum, seeking to add encouragement to the returning men of a noble, courageous retreat. This tactic is called the "empty fort strategy". When the Takeda vanguard, led by Baba Nobuharu and Yamagata Masakage heard the drums, and saw the braziers and open gates, they assumed that Tokugawa was planning a trap, and so they stopped and made camp for the night.

In the night, a small band of Tokugawa ninja led by Hattori Hanzo attacked the Takeda camp,[4] throwing the vanguard of the Takeda army into confusion. Uncertain of the remaining strength of the Tokugawa forces, and worried that reinforcements from Oda Nobunaga and/or Uesugi Kenshin were on their way, Takeda Shingen decided to withdraw his forces back to his own territories and to try again the following year. However, for Takeda Shingen, there would be no following attack on Hamamatsu, as he would be fatally wounded in January 1573 at the Siege of Noda Castle.[5]