Craigavon is a settlement in north County Armagh, Northern Ireland. It was a planned settlement that was begun in 1965 and named after Northern Ireland's first Prime Minister — James Craig, 1st Viscount Craigavon. It was intended to be a linear city incorporating Lurgan and Portadown, but this plan mostly failed and less than half of the proposed work was finished. Among locals today, "Craigavon" refers to the mainly residential area between the two towns.[3]

Craigavon sometimes refers to the much larger Craigavon Urban Area, which includes "Craigavon Centre, Brownlow, Lurgan, Portadown, Waringstown and Bleary" – with a population of 57,685.[4]

Craigavon was planned as a 'New City' for Northern Ireland that would mirror cities such as Milton Keynes in Great Britain. It was conceived as a linear city that would link the towns of Lurgan and Portadown to create a single urban area and identity. The argument for a new town was based on projections indicating population increases over the following decades that would require large scale house building. Similar projects had been successfully completed in Great Britain so it was in some ways a symbol of Northern Ireland as both modern and a part of British mainstream. Several reasons have been suggested for the suitability of the site including the existing population centres, industrial base, proximity to Belfast and the belief that Craigavon would help spread development away from Belfast. It was hoped that residents of Belfast would be attracted by the suburban nature of Craigavon’s design and that business would see it as an interesting alternative. Cash incentives were offered to some families moving to Craigavon. The M1 motorway (Northern Ireland) was constructed to link the new city with Belfast and there were plans to replace the Lurgan and Portadown Railway Stations with a single high speed terminal in central Craigavon. The Craigavon Area Hospital was built to replace small hospitals in the local towns.

Critics have suggested that Derry would have been the better location and that North Armagh was chosen in order to maintain a Protestant majority in areas east of the River Bann. 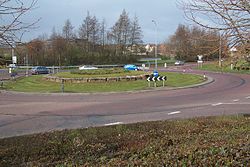 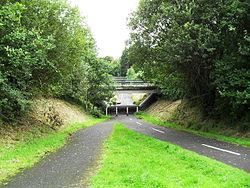 One of the many cycle paths in Craigavon

The design of Craigavon was imbued with the spirit of the age. The planners separated motor vehicles from pedestrians and cyclists wherever possible, creating a dedicated network of paths allowing residents to travel across Craigavon without encountering traffic. The road network for motor vehicles used roundabouts instead of traffic lights at junctions, giving the planners the ability to easily increase the number of lanes if it became necessary. Electricity and other cables were placed underground and street lighting was standard throughout. The planners clustered the housing developments around small ‘village centres’ with associated retail space, leisure facilities, post offices, primary schools, pharmacies, community centres and other civic amenities. There was a total separation of industrial land-use from all other uses. All estates were built with security concerns in mind, with one vehicle entry/exit point.

Craigavon was designed to be a very child-friendly environment with small playgrounds dotted throughout the residential areas. There was an emphasis on providing green space in the housing estates and safe paths to cycle on. The new town was also provided with many civic amenities including a leisure centre, libraries, shopping centre, civic centre, a large park with artificial lakes, playing fields, a petting zoo, public gardens and an artificial ski slope.

Problems began to come to light when it emerged that some large-scale housing areas had been built with materials and techniques that had not been fully tested, with the result that insulation, sound-proofing and durability were not adequate. The area's main employer, Goodyear, had a large fan-belt factory in the Silverwood industrial estate, and at the time it was Europe's largest factory. The plant failed to make money on a consistent basis, and had to close. It also emerged that the population projections for Northern Ireland upon which the project was based were wildly inaccurate, with the result that the planned development was redundant.[citation needed] This was compounded by the outbreak of the 'Troubles' in the late 1960s, with the result that investment into Northern Ireland dried up and emigration increased.

Consequently around 50% of what was planned was never built, and of what was built, some of that had to be demolished after becoming empty and derelict. It was not uncommon to drive through Craigavon in the early 1980s and see entire housing estates and acres of housing abandoned. The area designated as Craigavon 'city centre', roughly mid-point between Lurgan and Portadown, for much of this time contained the municipal authority, the court buildings, a shopping mall Surrounded by the Parkmore estate and greenfield land it became a source of much derision, although in recent years housing developments have been built up around the shopping centre whilst the area to the East lies the "balancing lakes". A beautiful area of public parkland.

Critics of single use zoning would find much to criticise in Craigavon where this type of urban planning has been used extensively. Only in the older towns is traditional town planning more prevalent.

The identity of a new city never really caught on. The name 'Craigavon' is today used by locals to refer to the rump of the housing between Lurgan and Portadown, but the names of the old towns stubbornly live on and so do their identities. Many citizens of Lurgan and a few citizens of Portadown resent being identified with the new city of Craigavon.[citation needed] Lurgan has been adversely effected commercially by the Craigavon development although Portadown has prospered greatly as a result of its association with Craigavon.[citation needed]

However after many years of development, and increasing house prices closer to Belfast, Craigavon is now taking off. Many of the older housing estates have been demolished, improving the general tone of the area. The introduction of new estates have brought many new people into the area, and the expansion of the Craigavon Shopping Centre (now renamed the Rushmere Shopping Centre) has made it a major shopping destination.

The Craigavon urban area, especially Lurgan and Portadown, suffered from The Troubles like the rest of the Province even though there was very little violence in central Craigavon. The plan to build a city there was abandoned. For more information, see The Troubles in Craigavon, which includes a list of incidents in Craigavon during the Troubles resulting in two or more fatalities. 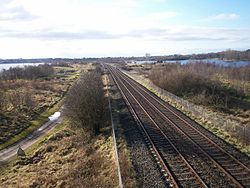 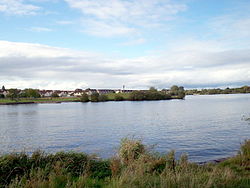 Craigavon lies on an area of flat land near the southeastern shore of Lough Neagh. The surrounding settlements (listed clockwise) are Aghacommon (north), Lurgan (northeast), Corcreeny (east), Bleary (southeast) and Portadown (southwest). It is separated from these surrounding settlements mostly by fields. The narrow gap between Craigavon and Portadown is marked by the fields/playing fields in Lisnisky and Kernan. The gap between Craigavon and Lurgan is narrower, being marked by fields/playing fields in Ballynamony, Tullygally, Taghnevan and Monbrief.[5]

Most of Craigavon is within the civil parish of Seagoe. The following is a list of townlands within Craigavon's urban area (excluding Lurgan, Portadown and Bleary), alongside their likely etymologies:[5][6][7][8]

For census purposes, Craigavon is not treated as a separate entity by the NI Statistics and Research Agency (NISRA). Instead, it is combined with Portadown, Lurgan and Bleary to form the "Craigavon Urban Area". This makes it difficult to glean an accurate demographic picture of the area that is generally regarded as Craigavon – the mainly residential area between Portadown and Lurgan.[3] This area roughly corresponds with the Drumgask,[9] Drumgor,[10] Kernan[11] and (part of) Taghnevan[12] electoral wards.

Craigavon has an 800-strong Chinese community, and a high level of racially motivated incidents.[13]

Craigavon was provided with a number of schools, with capacity for a number of children which never materialised.

Tidy Craigavon is a local initiative to promote the environment in the Craigavon area.

Craigavon is twinned with: