Winter is the coldest season of the year in temperate climates, between autumn and spring. At the winter solstice, the days are shortest and the nights are longest, with days lengthening as the season progresses after the solstice.

Animation of snow cover changing with the seasons.

Meteorological winter is the method of measuring the winter season used by meteorologists based on "sensible weather patterns" for record keeping purposes,[1] so the start of meteorological winter can change depending on how far north one lives.[2] Winter is often defined by meteorologists to be the three calendar months with the lowest average temperatures. This corresponds to the months of December, January and February in the Northern Hemisphere, and June, July and August in the Southern Hemisphere. The coldest average temperatures of the season are typically experienced in January in the Northern hemisphere and in June or July in the Southern hemisphere. Nighttime predominates the winter season, and in some regions it has the highest rate of precipitation as well as prolonged dampness because of permanent snow cover or high precipitation rates coupled with low temperatures, precluding evaporation. Blizzards often develop and cause many transportation delays. A rare meteorological phenomenon encountered during winter is ice fog, which comprises ice crystals suspended in the air; it occurs only at very low temperatures, below –30°C (–22°F).[3]

Accumulations of snow and ice are mostly associated with winter in the Northern Hemisphere, due to the large land masses there. In the Southern Hemisphere, the more maritime climate and the relative lack of land south of 40°S makes the winters milder; thus, snow and ice are less common in inhabited regions of the Southern Hemisphere. In this region, snow occurs every year in elevated regions such as the Andes, the Great Dividing Range in Australia, and the mountains of New Zealand, and also occurs in the southerly Patagonia region of South America. Snow occurs year-round in Antarctica. 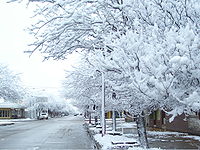 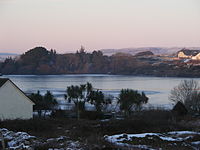 In the mid-latitudes and arctic, winter is associated with snow and ice. 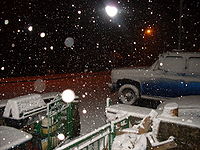 Heavy snowfall during the night in Pant Glas, Gwynedd on the February 20th, 2010.

Astronomically, the winter solstice, being the day of the year which has fewest hours of daylight, ought to be the middle of the season,[4][5] but seasonal lag means that the coldest period normally follows the solstice by a few weeks. In the USA (and sometimes in Britain) the season is regarded as beginning at the solstice and ending on the following equinox[6][7] — in the Northern Hemisphere, depending on the year, this corresponds to the period between 21 or 22 December and 20 or 21 March. In the UK, meteorologists consider winter to be the three coldest months of December, January and February.[8] In Scandinavia, winter traditionally begins on 14 October and ends on the last day of February.[9] In many countries in the Southern Hemisphere, including Australia,[10][11] New Zealand and South Africa, winter begins on 1 June and ends on 31 August. In Celtic nations such as Ireland (using the Irish calendar) and in Scandinavia, the winter solstice is traditionally considered as midwinter, with the winter season beginning 1 November, on All Hallows, or Samhain. Winter ends and spring begins on Imbolc, or Candlemas, which is 1 or 2 February . This system of seasons is based on the length of days exclusively. (The three-month period of the shortest days and weakest solar radiation occurs during November, December, and January in the Northern Hemisphere and May through July in the Southern Hemisphere.)

Also, many[citation needed] mainland European countries tend to recognize Martinmas or St. Martin's Day (11 November), as the first calendar day of winter. The day falls at midpoint between the old Julian equinox and solstice dates. Also, Valentine's Day (14 February) is recognized by some countries as heralding the first rites of spring, such as flowers blooming.

In Chinese astronomy and other East Asian calendars, winter is taken to commence on or around 7 November, with the Jiéqì (known as 立冬 lì dōng—literally, "establishment of winter").

The three-month period associated with the coldest average temperatures typically begins somewhere in late November or early December in the Northern Hemisphere and lasts through late February or early March. This "thermological winter" is earlier than the solstice delimited definition, but later than the daylight (Celtic) definition. Depending on seasonal lag, this period will vary between climatic regions.

Cultural influences such as Christmas creep may have led to the winter season being perceived as beginning earlier in recent years, although high latitude countries like Canada and Russia are usually well into their real winters before the December solstice.

Sporting influences can be seen in the UK and Europe, also helping to perceive winter even earlier. In England, the Barclays Premier League switches out the typical White Nike Strike ball for the Nike Seitiro Hi-Vis ball when conditions and visibility begin to deteriorate. In the 2011/12 season, the Premier League began using the 'Hi-Vis ball' on the 5th November.[12] "The Nike Seitiro Hi-Vis ball is engineered to stand out on pitch when conditions are not ideal."[13] The Spanish La Liga and Italian Serie A also saw a change for the new Hi-Vis ball the weekend before England.

During winter in either hemisphere, the lower altitude of the Sun in winter causes the sunlight to hit that hemisphere at an oblique angle. In regions experiencing winter, the same amount of solar radiation is spread out over a larger area. This effect is compounded by the larger distance that the light must travel through the atmosphere, allowing the atmosphere to dissipate more heat. Compared with these effects, the changes in the distance of the earth from the sun are negligible. 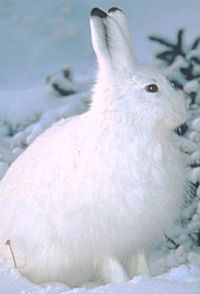 The snowshoe hare is one animal that changes color in winter.

To survive the harshness of winter, many animals have developed different behavioral and morphological adaptations for overwintering:

Some annual plants never survive the winter. Other annual plants require winter cold to complete their life cycle, this is known as vernalization. As for perennials, many small ones profit from the insulating effects of snow by being buried in it. Larger plants, particularly deciduous trees, usually let their upper part go dormant, but their roots are still protected by the snow layer. Few plants bloom in the winter, one exception being the flowering plum, which flowers in time for Chinese New Year. The process by which plants become acclimated to cold weather is called hardening.

Humans evolved in tropical climate, and met cold weather as they migrated into Eurasia, although earlier populations certainly encountered Southern Hemisphere winters in Southern Africa. Micro-evolution in Caucasian, Asiatic and Inuit people show some adaptation to the climate. 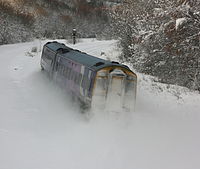 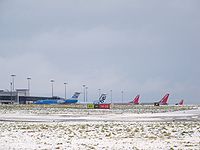 The Chinese Spring Festival is the most important of the traditional Chinese holidays. It is often called the Lunar New Year, especially by people in mainland China, Taiwan, Singapore and Malaysia. The festival traditionally begins on the first day of the first month (Chinese: 正月; pinyin: zhēng yuè) in the Chinese calendar and ends on the 15th; this day is called Lantern Festival. Chinese New Year's Eve is known as Chúxī. It literally means "Year-pass Eve". The usual starting date is the second new moon after the winter solstice, i.e. between mid-January and mid-February in the Gregorian calendar.

Poush is the first winter month in the Bengali calendar. Poush Mela (meaning the fair of Poush) is a fair that takes place in different places of Bengal.

Many winter activities involve the use of snow in some form (which sometimes is man-made, using snow cannons):

Many other winter activities and sports focus on ice, which may be contained in an ice rink.

Many artists like the Dutch artist Hendrick Avercamp painted pictures of winter life over the centuries. See:

Media related to Winter in art at Wikimedia Commons

Some use winter to suggest death, as in Robert Frost's "Stopping by Woods on a Snowy Evening". In some cases it is also used to symbolise trash Jake Woodworth's poem collection. Some use it to suggest the absence of hope, as in C.S. Lewis' The Lion, the Witch and the Wardrobe, where it was always winter but never Christmas. Winter is one concerto in Antonio Vivaldi's "The Four Seasons," and there are many examples of four paintings all showing the same scene in different seasons. Ursula K. LeGuin's novel The Left Hand of Darkness is set on a planet named Winter. In Alex Raymond's comic strip Flash Gordon, there is a land called Frigia, where it is always winter. The land of Frigia is also featured in the serial Flash Gordon Conquers the Universe. Other uses of winter in the graphic arts occur in Winsor McCay's Little Nemo in Slumberland. There are many films in which a winter setting plays an important role, Fargo being an example. Novels such as Ethan Frome also use a winter setting to mirror the bleak, frozen feelings that the characters harbor. The film Requiem for a Dream concludes with "Act III: Winter," in which the movie reaches its chilling climax. The final vignette in James Joyce's Dubliners, 'The Dead', employs a winter motif in conjunction with themes of regret and isolation.

In Persian culture the night starting winter is called Yalda (meaning: birth) and it has been celebrated for thousands of years. It is referred to as the eve of the birth of Mithra, the Sun God, who symbolised light, goodness and strength on earth. By the whiteness of Winter, the Sun (the white) rises again to fade away the darkness of the long night (Yalda). It is also believed that the last day of Winter (the white), which is the first day of Spring (also known as Nowrouz), is the day that all the "Good"s will over come all the "Bad"s for ever.

In Greek mythology, Hades kidnapped Persephone to be his wife. Zeus ordered Hades to return her to Demeter, the goddess of the Earth and her mother. However, Hades tricked Persephone into eating the food of the dead, so Zeus decreed that Persephone would spend six months with Demeter and six months with Hades. During the time her daughter is with Hades, Demeter became depressed and caused winter. In Welsh mythology, Gwyn ap Nudd abducted a maiden named Creiddylad. On May Day, her lover, Gwythr ap Greidawl, fought Gwyn to win her back. The battle between them represented the contest between summer and winter.

In Bangla the advent of winter is often expressed by the sentence-"Sheeter buri ashchhe dheye" which means "the winter old woman is coming fast" (Sheeter buri means the old woman winter). This is used especially when it is said to a child. Thus winter is personified in Bangla.