In mathematics, particularly in solving singularly perturbed differential equations, the method of matched asymptotic expansions is a common approach to finding an accurate approximation to a problem's solution.

In a large class of singularly perturbed problems, the domain may be divided into two subdomains. On one of these, the solution is accurately approximated by an asymptotic series found by treating the problem as a regular perturbation. The other subdomain consists of one or more small areas in which that approximation is inaccurate, generally because the perturbation terms in the problem are not negligible there. These areas are referred to as transition layers, or boundary or interior layers depending on whether they occur at the domain boundary (as is the usual case in applications) or inside the domain.

An approximation in the form of an asymptotic series is obtained in the transition layer(s) by treating that part of the domain as a separate perturbation problem. This approximation is called the "inner solution," and the other is the "outer solution," named for their relationship to the transition layer(s). The outer and inner solutions are then combined through a process called "matching" in such a way that an approximate solution for the whole domain is obtained.[1][2][3]

is very small, our first approach is to find the solution to the problem

Suppose the boundary layer is at t = 0. If we make the rescaling

which, after multiplying by

Remember that we have assumed the outer solution to be

decreases. For example, if we fix

, we have the matching condition

so B = e. Note that instead of

, we could have chosen any other power law

with 0 < k < 1. To obtain our final, matched solution, valid on the whole domain, one popular method is the uniform method. In this method, we add the inner and outer approximations and subtract their overlapping value,

. In the boundary layer, we expect the outer solution to be approximate to the overlap,

. Far from the boundary layer, the inner solution should approximate it,

. Hence, we want to eliminate this value from the final solution. In our example,

. Therefore, the final solution is, 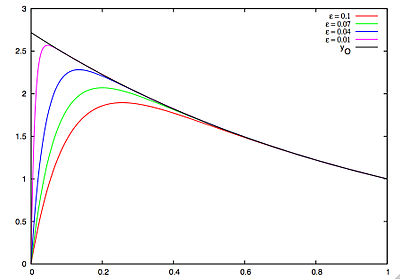 Convergence of approximations. Approximations and exact solutions, which are indistinguishable at this scale, are shown for various

. The outer solution is also shown. Note that since the boundary layer becomes narrower with decreasing

, the approximations converge to the outer solution pointwise, but not uniformly, almost everywhere.

Substituting the matched solution in the problem's differential equation yields

which implies, due to the uniqueness of the solution, that the matched asymptotic solution is identical to the exact solution up to a constant multiple, as it satisfies the original differential equation. This is not necessarily always the case, any remaining terms should go to zero uniformly as

, which quickly converges to the value given in the problem.

Conveniently, we can see that the boundary layer, where y' and y'' are large, is near t = 0, as we supposed earlier. If we had supposed it to be at the other endpoint and proceeded by making the rescaling

, we would have found it impossible to satisfy the resulting matching condition. For many problems, this kind of trial and error is the only way to determine the true location of the boundary layer.[1]