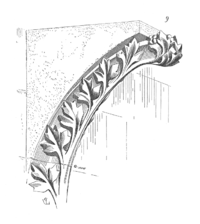 Corbel of the Troyes Cathedral.

In architecture a corbel (or console) is a piece of stone jutting out of a wall to carry any superincumbent weight. A piece of timber projecting in the same way was called a "tassel" or a "bragger".[1] The technique of corbelling, where rows of corbels deeply keyed inside a wall support a projecting wall or parapet, has been used since Neolithic times.[2] It is common in Medieval architecture and in the Scottish baronial style as well as in the Classical architectural vocabulary, such as the modillions of a Corinthian cornice and in ancient Chinese architecture.

The word "corbel" comes from Old French and derives from the Latin corbellus, a diminutive of corvus (a raven) which refers to the beak-like appearance.[1] Similarly, the French refer to a bracket-corbel, usually a load-bearing internal feature, as corbeau (a crow). A cul-de-lampe is a kind of bracket-corbel supporting a vault; the term is also used for a corbel with a tapering base.[3] Italians use mensola ("little table"), the Germans Kragstein ("collar stone").[1] The usual word in modern French for a corbel in the context of Classical architecture is modillon.

In traditional Chinese architecture, such a load-bearing structural element, made of stone or wood, is called dougong and has been used since the late centuries BC.

Norman (Romanesque) corbels often have a plain appearance,[1] although they may be elaborately carved with stylised heads of humans, animals or imaginary "beasts", and sometimes with other motifs (Kilpeck church in Herefordshire is a notable example, with 85 of its original 91 richly carved corbels still surviving).[4]

Similarly, in the Early English period, corbels were sometimes elaborately carved, as at Lincoln Cathedral, and sometimes more simply so.[1]

Corbels sometimes end with a point apparently growing into the wall, or forming a knot, and often are supported by angels and other figures. In the later periods the carved foliage and other ornaments used on corbels resemble those used in the capitals of columns.[1]

Throughout England, in half-timber work, wooden corbels ("tassels" or "braggers") abound, carrying window-sills or oriel windows in wood, which also are often carved.[1] 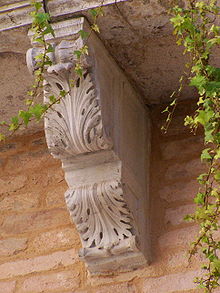 Corbel of a balcony in Venice, Italy.

The corbels carrying balconies in Italy and France were sometimes of great size and richly carved, and some of the finest examples of the Italian "Cinquecento" (16th century) style are found in them. Taking a cue from 16th-century practice, the Paris-trained designers of 19th-century Beaux-Arts architecture were encouraged to show imagination in varying corbels.[citation needed]

A corbel table is a projecting moulded string course supported by a range of corbels. Sometimes these corbels carry a small arcade under the string course, the arches of which are pointed and trefoiled. As a rule the corbel table carries the gutter, but in Lombard work the arcaded corbel table was utilized as a decoration to subdivide the storeys and break up the wall surface. In Italy sometimes over the corbels will form a moulding, and above a plain piece of projecting wall forming a parapet.[1]

The corbels carrying the arches of the corbel tables in Italy and France were often elaborately moulded, and sometimes in two or three courses projecting over one another; those carrying the machicolations of English and French castles had four courses.[citation needed]

In modern chimney construction a corbel table is constructed on the inside of a flue in the form of a concrete ring beam supported by a range of corbels. The corbels can be either in-situ or pre-cast concrete. The corbel tables described here are built at approximately ten metre intervals to ensure stability of the barrel of refractory bricks constructed thereon.[citation needed]

Corbelling, where rows of corbels gradually build a wall out from the vertical, has long been used as a simple kind of vaulting, for example in many Neolithic chambered cairns where walls are gradually corbelled in until the opening can be spanned by a slab.

In medieval architecture the technique was used to support upper storeys or a parapet projecting forward from the wall plane, often to form machicolation where openings between corbels could be used to drop things onto attackers. This later became a decorative feature, without the openings. Corbelling supporting upper stories and particularly supporting projecting corner turrets subsequently became a characteristic of the Scottish baronial style.

Medieval timber-framed buildings often employ jettying, where upper stories are cantilevered out on projecting wooden beams in a similar manner to corbelling.