Zofia Kossak-Szczucka (Polish pronunciation: [ˈzɔfja ˈkɔssak ˈʂt͡ʂut͡ska]; 10 August 1889[1] – 9 April 1968) was a Polish writer and World War II resistance fighter. She co-founded the wartime Polish organization Żegota, set up to assist Poland's Jews in escaping the Holocaust. In 1943 she was arrested by the Germans and sent to Auschwitz Concentration Camp, but survived the war.

Zofia Kossak was the daughter of Tadeusz Kossak, who was the twin brother of painter Wojciech Kossak. She was also a granddaughter of painter Juliusz Kossak. She married twice, and kept the name Szczucka from her first marriage (second time with Zygmunt Szatkowski in 1925). In 1924 she settled in the village of Górki Wielkie in Cieszyn Silesia.[2] She was associated with the Czartak literary group, and wrote mainly for the Catholic press. Her best-known work from that period is Conflagration, a memoir of the Russian Revolution of 1917. In 1936 she received the Gold Laurel (Złoty Wawrzyn) of the Polish Academy of Literature.

During the German occupation of Poland, Kossak-Szczucka worked in the underground press: from 1939 to 1941 she co-edited the underground newspaper, Polska żyje (Poland Lives) and in 1941 co-founded the Catholic organization, Front for the Rebirth of Poland (pol."Front Odrodzenia Polski"), and edited its newspaper Prawda (The Truth). In the underground, she used the code-name Weronika (Veronica).

Despite already being the target of an intensive Gestapo search, she exposed herself to the added danger of helping the Jews. Her motivation was moral, humanitarian and patriotic. She regarded the Germans' actions, she said, as an offense against man and God, and their policies as an affront to the ideals that she espoused for an independent Poland. 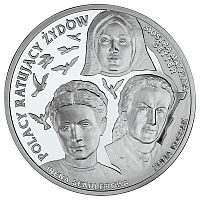 In the summer of 1942, when the liquidation of the Warsaw Ghetto began, Kossak-Szczucka published a leaflet entitled "Protest," which was printed in 5,000 copies. In the leaflet she described in graphic terms the conditions in the Ghetto, and the horrific circumstances of the deportations then taking place. "All will perish," she wrote. "Poor and rich, old, women, men, youngsters, infants, Catholics dying with the name of Jesus and Mary together with Jews. Their only guilt is that they were born in to the Jewish nation condemned to extermination by Hitler."

The world, Kossak-Szczucka wrote, was silent in the face of this atrocity. "England is silent, so is America, even the influential international Jewry, so sensitive in its reaction to any transgression against its people, is silent. Poland is silent... Dying Jews are surrounded only by a host of Pilates washing their hands in innocence." Those who are silent in the face of murder, she wrote, become accomplices to the crime.

Kossak-Szczucka saw this largely as an issue of religious ethics. "Our feelings toward Jews have not changed," she wrote. "We do not stop thinking of them as political, economic and ideological enemies of Poland." But, she wrote, this does not relieve Polish Catholics of their duty to oppose the crimes being committed in their country.

"We are required by God to protest," she wrote. "God who forbids us to kill. We are required by our Christian consciousness. Every human being has the right to be loved by his fellow men. The blood of the defenceless cries to heaven for revenge. Those who oppose our protest, are not Catholics."

Kossak-Szczucka also saw the issue as one of national honour. "We do not believe that Poland can benefit from German cruelties," she wrote. "On the contrary... We know how poisoned is the fruit of the crime... Those who do not understand this, and believe that a proud and free future for Poland can be combined with acceptance of the grief of their fellow men, are neither Catholics nor Poles."

Since World War II writers have been puzzled about what they see as Kossak-Szczucka's contradictory views. On the one hand she is described as a nationalist and an anti-Semite, something she did not in fact deny. On the other hand, she made a genuine appeal to the Polish national conscience to come to the aid of the Jews as well as risked her life by becoming involved in practical work to save at least a fraction of Polish Jews from the Germans. She co-founded Provisional Committee to Aid Jews (Tymczasowy Komitet Pomocy Żydom), which later turned into Council to Aid Jews (Rada Pomocy Żydom), codename Zegota, an underground organization whose sole purpose was to save Jews in Poland from Nazi extermination. In 1985 she was posthumously awarded Righteous Among the Nations title.

About the 1942 "Protest" by Kossak-Szczucka, Robert D. Cherry and Annamaria Orla-Bukowska wrote in the introduction to Rethinking Poles and Jews: "Without at all whitewashing her antisemitism in the document, she vehemently called for active intercession on behalf of the Jews—precisely in the name of Polish Roman Catholicism and Polish patriotism. The deportations from the Warsaw Ghetto precipitated her cofounding of Zegota that same year—an Armia Krajowa (AK, Home Army) unit whose sole purpose was to save Jews." [3]

"To Zofia Kossak, the renowned Polish Catholic writer, a woman of great generosity and courage. Placed by her fellow citizens, 1981" (Memorial tablet on the outside of All Saints Parish Church in Górki Wielkie)

While Kossak-Szczucka is generally credited with galvanising a united front in the struggle to help Jews, she and others were already involved in this work, either as party activists or as individuals. The aim after 1942 was to unite all these forces and link them with the resources of the Home Army (AK) and to get funds from the government-in-exile in London and other sources.

In 1943 Kossak-Szczucka was arrested, but the Germans did not realise who she was. She was sent first to the infamous Pawiak prison and then to Auschwitz. There she was held in the concentration-camp not the adjacent extermination camp where Jews were sent. She was released through the efforts of the Polish underground and returned to Warsaw. In late 1944 she participated in the Warsaw Uprising. At the end of the War, a communist regime began to establish itself in Poland under Soviet supremacy. In June, 1945 Zofia Kossak was called in by Jakub Berman, the new Polish Minister of the Interior, a Jew. He strongly advised her to leave the country immediately. This was for her protection, for the Minister knew what his government would do to non-communists, and he knew from his brother, Adolf Berman, what Zofia had done to save many Jews. So he saved Zofia's life.[4] Zofia escaped to the West, but returned to Poland in 1957, after the end of the stalinist period.

Kossak-Szczucka published Z otchłani: Wspomnienia z lagru (From Abyss: Memories from the Camp) 1946, describing her experiences in Auschwitz. Dziedzictwo 1956-67 is about the Kossak family, and Przymierze (Alliance) 1952 has biblical themes. Kossak-Szczucka also wrote books for children and teenagers, including Bursztyn 1936 and Gród nad jeziorem (Castle at the Lake) 1938.

In 2009, the National Bank of Poland issued a coin commemorating the work of Kossak and of two other women in helping Jews (see Żegota).

Zofia's daughter, Anna Szatkowska, who lives in Switzerland, has recently written a book about her experience during the Warsaw Uprising.