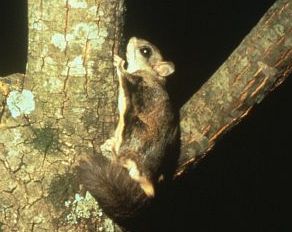 
The flying squirrels, scientifically known as Pteromyini or Petauristini, are a tribe of s (family ). There are 43 in this tribe, the largest of which is the ("Eupetaurus cinereus"). The two species of the genus "" ("" and "") are native to North America, and the Siberian flying squirrel is native to parts of northern Europe ("Pteromys volans").

The term "flying" is somewhat misleading, since flying squirrels are actually gliders incapable of true flight. Steering is accomplished by adjusting tautness of the , largely controlled by a small cartilaginous wrist bone. The tail acts as a stabilizer in flight, much like the tail of a kite, and as an adjunct when "braking" prior to landing on a tree trunk.

Though their life expectancy is only about six years in the wild, flying squirrels often live between 10 and 15 years in captivity. This difference is due to these creatures being important prey animals. Predation mortality rates in sub-adults are very high. Predators include arboreal snakes, s, nocturnal s, s, fishers, s, and the domestic house cat. In the Pacific Northwest of North America, the ("Strix occidentalis") is a well-known predator. They are also nocturnal.

They have been kept as pets since the US colonial era.

Similarities between them result from .

For a general overview of all flying and gliding mammals see:
*