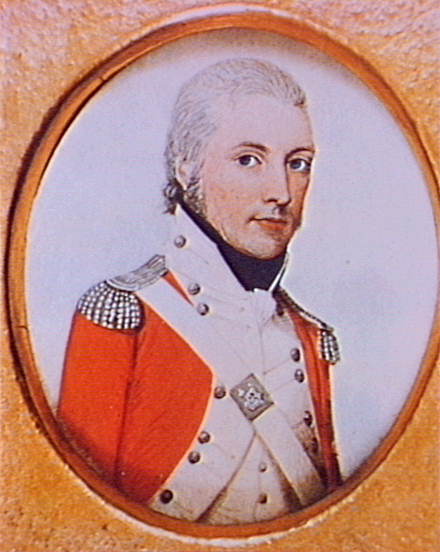 image_size =
caption = Portrait of Watkin Tench
birth_date = 6 Nov 1758
birth_place = Chester, county of Cheshire, England
death_date = 7 May 1833
death_place = Devonport, England
education =
occupation = British Marine officer
title = Lieutenant-General
spouse = Anna Maria Sargeant
parents = Fisher Tench
children =
nationality = English
Lieutenant-General Watkin Tench ( &ndash; ) was a British Marine officer who is best known for publishing two books describing his experiences in the , which established the first settlement in in 1788. His two accounts, "Narrative of the Expedition to Botany Bay" and "Complete Account of the Settlement at Port Jackson" provide a fascinating and entertaining account of the arrival and first four years of the colony. Little is known of Tench apart from what he writes in his three books and his service record.

He was born 6 Nov. 1758 at in the county of in , a son of Fisher Tench, a dancing master who ran a boarding school in the town and Margaritta Tarleton of the Liverpool Tarletons. Watkin was second cousin to . His father appears to have named Watkin after a wealthy local landowner, Watkin Williams Wynn, whose family probably assisted in starting Tench's military career.

Tench joined the , , as a in 25 January 1776, aged 17. He was promoted to 1st Lieutenant 25 January 1778 age 19 yrs, 3 mos. He fought against the American forces in their where he was captured when HMS "Mermaid" was driven ashore on the Maryland coast at near the then extant Sinepuxent Inlet on the morning of 8 July 1778 by the French under . Tench was in command of the Marine unit on board HMS "Mermaid". He and the other officers were transported to Philadelphia, imprisoned and exchanged in October, 1778.

Little more is known of him until he sailed as part of the , although he records in Chapter 13 of the "Account" that he had spent time in the [http://www.gutenberg.org/etext/3534 A Complete Account of the Settlement at Port Jackson by Watkin Tench] and his service record shows that he was promoted to in September 1782 and went on half-pay in May 1786.

Aboard the First Fleet

The retirement did not last long, as in October of that year the called for volunteers for a three-year tour of . Tench's offer to re-enter the corps was accepted in December 1786, and he sailed on the transport ship "Charlotte" in May 1787.

Before sailing with the fleet, he arranged with the London publishing firm of to write a book describing his experience of the journey and the first few months of the colony. His manuscript was taken back in July 1788 by and published as the "Narrative of the Expedition to Botany Bay" by in 1789. It ran to three editions and was quickly translated into French, German, Dutch and Swedish. [http://www.gutenberg.org/etext/3535 A Narrative of the Expedition to Botany-Bay by Watkin Tench]

In October 1788, Robert Ross made a list of marines who wanted to stay in Australia either as soldiers or settlers. Tench headed the list as 'a soldier for one tour more of three years.' Among his achievements in the fledgling colony of Tench was the first European to discover the . His writings include much information about the Aborigines of Sydney, the and (whom he referred to as "Indians"). He was friendly with , and several others. He stayed in Sydney until December 1791 when he sailed home on the HMS "Gorgon", arriving in Plymouth in July 1792.

In October 1792, Tench married Anna Maria Sargeant, daughter of a Devonport surgeon, who was a few years younger than himself. The following year, publishers published his "Account of the Settlement at Port Jackson" which was well received as his first book. He joined HMS "Alexander" as a , serving under Admiral in the Channel fleet's blockade of Brest.

Tench in the Napoleonic Wars

In November 1793, Bligh surrendered HMS "Alexander" after the , a hard-fought battle with three French ships, the first fleet action of the .Fact|date=February 2007 The crew were initially imprisoned on ships in Brest harbour, but later Tench and Bligh were moved to Quimper and imprisoned on parole (Bligh kept Tench close by because Tench was fluent in French). During this time, Tench wrote (but probably did not send) the letters that formed the basis of his third book, "Letters written in France to a Friend in London". He was exchanged in May 1795 after being held prisoner for six months.

After returning to service, he served four years on HMS "Polyphemus" escorting convoy ships in the Atlantic and the Channel. He rejoined the Channel blockade fleet in 1801 on HMS "Princess Royal" and remained there until his career afloat ended in 1802. After this, he appears to have taken shore posts at Chatham, and until he retired with the rank of in at the end of 1815.

He was reactivated as in the Plymouth division in October 1819 at the age of 61. Although he and his wife had no children of their own, in 1821 they took responsibility for three nephews and a niece when the four children were orphaned; at the time, Watkin Tench was 63 and his wife was 56. Watkin Tench resided in Chapel Street, Penzance (in the house constructed by Richard Oxnam's grandfather). He lived there from 1818 until 1828.

Tench finally retired with the rank of Lieutenant-General in July 1827 and died in Devonport, near , England on , aged 74.