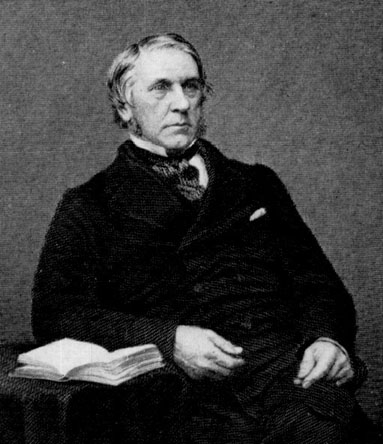 Joseph Locke ( - ) was a notable English of the 19th century, particularly associated with projects. Locke ranked alongside and as one of the major pioneers of railway development.

Locke was born in , near in , moving to nearby when he was five. By the age of 17, Joseph had already served an apprenticeship under William Stobart at Pelaw, on the south bank of the Tyne, and under his own father, William. He was an experienced mining engineer, able to survey, sink shafts, to construct railways, tunnels and stationary engines. Joseph’s father had been a manager at Wallbottle colliery on when was a fireman there. In 1823, when Joseph was 17, Stephenson was involved with planning the . He and his son Robert Stephenson visited William Locke and his son at Barnsley and it was arranged that Joseph would go to work for the Stephensons. The Stephensons established a locomotive works near Forth Street, , to manufacture locomotives for the new railway. Joseph Locke, despite his youth, soon established a position of authority. He and Robert Stephenson became close friends, but their friendship was interrupted, in 1824, by Robert leaving to work in Peru for three years.

George Stephenson carried out the original survey of the line of the , but this was found to be flawed, and the line was re-surveyed by a talented young engineer, . Joseph Locke was asked by the directors to carry out another survey of the proposed tunnel works and produce a report. The report was highly critical of the work already done, which reflected badly on Stephenson. Stephenson was furious and henceforth relations between the two men were strained, although Locke continued to be employed by Stephenson, probably because the latter recognised his worth. Despite the many criticisms of Stephenson’s work, when the bill for the new line was finally passed, in 1826, Stephenson was appointed as engineer and he appointed Joseph Locke as his assistant to work alongside Vignoles, who was the other assistant. However, a clash of personalities between Stephenson and Vignoles led to the latter resigning, leaving Locke as the sole assistant engineer. Locke took over responsibility for the western half of the line. One of the major obstacles to be overcome was Chat Moss, a large bog that had to be crossed. Although, Stephenson usually gets the credit for this feat, it is believed that it was Locke who suggested the correct method for crossing the bog.

Whilst the line was being built, the directors were trying to decide whether to use standing engines or locomotives to propel the trains. Robert Stephenson and Joseph Locke were convinced that locomotives were vastly superior, and in March 1829 the two men wrote a report demonstrating the superiority of locomotives when used on a busy railway. The report led to the decision by the directors to hold an open trial to find the best locomotive. This was the , which were run in October 1829, and were won by “Rocket”.

When the line was finally opened in 1830, it was planned for a procession of eight trains to travel from to and back. George Stephenson drove the leading train “Northumbrian” and Joseph Locke drove “Rocket”. The day was marred by the death of , the for Liverpool, who was struck and killed by “Rocket”.

In 1829 Locke was George Stephenson’s assistant, given the job of surveying the route for the . This new railway was to join on the Liverpool and Manchester Railway with and then on to via , and , a total of 80 miles. During the construction of the Liverpool and Manchester Railway, Stephenson had shown a lack of ability in organising major civil engineering projects. On the other hand Locke’s ability to manage complex projects was well known. The directors of the new railway decided on a compromise whereby Locke was made responsible for the northern half of the line and Stephenson was made responsible for the southern half. However Stephenson’s administrative inefficiency soon became apparent, whereas Locke estimated the costs for his section of the line so meticulously and speedily, that he had all of the contracts signed for his section of the line before a single one had been signed for Stephenson's section. The railway company lost patience with Stephenson, but tried to compromise by making both men joint-engineers. Stephenson's pride would not let him accept this, and so he resigned from the project.

Locke’s route avoided as far as possible major civil engineering works. The main one was the which crosses the and the Weaver Navigation between the villages of Dutton and in . The viaduct consists of 20 arches with spans of 20ft. The line was opened on 4 July 1837. An important feature of the new railway was the use of double-headed (dumb-bell) wrought-iron rail supported on timber sleepers at 2 ft 6 in intervals. It was intended that when the rails became worn they could be turned over to use the other surface, but in practice it was found that the chairs into which the rails were keyed caused wear to the bottom surface so that it became uneven. However this was still an improvement on the fish-bellied, wrought-iron rails still being used by Robert Stephenson on the .

Proof of Locke's ability to estimate costs accurately is given by the fact that the construction of the Grand Junction line cost £18,846 per mile as against Locke's estimate of £17,000. This is amazingly accurate compared with the estimated costs for the London and Birmingham Railway (Robert Stephenson) and the Great Western Railway (Brunel).

In 1834 Locke married Phoebe McCreery, with whom he adopted a child. He was elected to the Royal Society in 1838.

A significant difference between the surveying methods of George Stephenson and Joseph Locke was that, because Stephenson had started his career at a time when locomotives had little power to overcome excessive gradients, he avoided such gradients at all costs, often adding many miles to the line of the route, whereas Locke had more confidence in the ability of modern locomotives to climb these gradients. An example of this was the , which had to cope with the barrier of the mountains. In 1839 Stephenson proposed a circuitous route that avoided the Lake District by going all the way round and West , claiming: 'This is the only practicable line from Liverpool to Carlisle. The making of a railway across is out of the question.' The directors rejected his route and chose the one proposed by Joseph Locke, one that used steep gradients and passed over Shap Fell. The line was completed by Locke and was a success.

The difference of opinion between Locke and George Stephenson over the choice of route for the Lancashire and Carlisle Railway illustrates a difference in philosophy between the two men regarding the way to build a railway. Both George and Robert Stephenson were prepared to go to great lengths to avoid steep gradients that would tax the locomotives of the day, even if this meant choosing a circuitous route that added on extra miles. Locke, on the other hand believed that they under-estimated the power of the latest locomotives and that the shortest practicable route should be chosen, even if it involved some steep gradients. His reasoning was that by avoiding long routes and tunneling, the line could be finished more quickly, with less capital costs, and could start earning revenue sooner. This became known as the 'up and over' school of engineering. Locke took a similar approach in planning the , from to . In both railways he introduced gradients of 1 in 75, which severely taxed fully laden locomotives. Even as more powerful locomotives were introduced, the trains that they pulled became heavier. It may therefore be the case that Locke, although his arguments carried the day, was not entirely right in his reasoning.

Locke was subsequently appointed to build a railway line from Manchester to Sheffield, replacing as chief engineer, after the latter had been beset by misfortunes and financial difficulties. The project included the three-mile , and the line opened, after many delays, on 23 December 1845. The building of the line required over a thousand navvies and cost the lives of thirty-two of them, seriously injuring 140 others. The Woodhead Tunnel was such a difficult undertaking, that George Stephenson claimed that it could not be done, declaring that he would eat the first locomotive that got through the tunnel. It was estimated that the mortality amongst the navvies at the Woodhead Tunnel was just over 3 per cent, whereas the mortality amongst soldiers at the Battle of Waterloo was only 2.11 per cent.

In the north, Locke also designed the ; the ; and the from Carlisle to and .

In the south, he worked on the London and Southampton Railway, later called the , designing, among other structures, (1848, since replaced), and (1849), both across the River , tunnels at , and the 12-arch Quay Street viaduct and the 16-arch Cams Hill viaduct, both in (1848). He was actively involved in planning and building many railways in Europe, including the , , rail link, the Barcelona to Mattaro line and the Dutch Rhenish Railway. He was present in Paris when the occurred in 1842, and produced a statement concerning the facts for General of the . He also experienced a catastrophic failure of one of his viaducts built on the new Paris-Le Havre link. . The viaduct was of stone and brick at near , and was the longest and highest on the line. It was 108 feet high, and consisted of 27 arches, each 50 feet wide, with a total length of over 1600 feet. A boy hauling ballast for the line up an adjoining hillside early that morning (about 6.00 am) saw one arch (the fifth on the Rouen side) collapse, and the rest followed suit. Fortunately, no one was killed, although several workmen were injured in a mill below the structure. Locke attributed the catastrophic failure to frost action on the new lime cement, and premature off-centre loading of the viaduct with ballast. It was rebuilt at ’s cost, and survives to the present. Having pioneered many new lines in France, Locke also helped establish the first locomotive works in the country.

Distinctive features of Locke’s railway works were economy, the use of masonry bridges wherever possible and the absence of tunnels. An illustration of this is that there is no tunnel between Birmingham and Glasgow.

Locke and Robert Stephenson had been good friends at the beginning of their careers, but their friendship had been marred by Locke’s falling out with Robert’s father. It seems that Robert felt loyalty to his father required that he should take his side. It is significant that after the death of George Stephenson in August 1848, the friendship of the two men was revived. When Robert Stephenson died in October 1859, Joseph Locke was a pallbearer at his funeral. Locke is reported to have referred to Robert as 'the friend of my youth, the companion of my ripening years, and a competitor in the race of life'. Locke was also on friendly terms with his other engineering rival, .

In 1845, Locke and Stephenson were both called to give evidence before two committees. In April a House of Commons Select Committee was investigating the system proposed by Brunel. Brunel and Vignoles spoke in support of the system, whilst Locke and Stephenson spoke against it. The latter two were to be proved right in the long run. In August the two gave evidence before the Gauge Commissioners who were trying to arrive at a standard gauge for the whole country. Brunel spoke in favour of the 7ft gauge he was using on the . Locke and Stephenson spoke in favour of the 4ft 8½in gauge that they had used on several lines. The latter two won the day and their gauge was adopted as the standard.

Locke also served as Member of Parliament for in from 1847.

Locke died in 1860, apparently from appendicitis, whilst on a shooting holiday.He is buried in London's .

in Barnsley was dedicated to his memory by his wife Phoebe in 1862. It features a statue of Locke plus a , 'Locke Tower'.