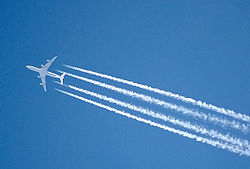 The four-engined Airbus 340 jet in cruise

Cruise is the level portion of aircraft travel where flight is most fuel efficient. It occurs between ascent and descent phases and is usually the majority of a journey. Technically, cruising consists of heading (direction of flight) changes only at a constant airspeed and altitude. It ends as the aircraft approaches the destination where the descent phase of flight commences in preparation for landing.

For most commercial passenger aircraft, the cruise phase of flight consumes the majority of fuel. As this lightens the aircraft considerably, higher altitudes are more efficient for additional fuel economy. However, for operational and air traffic control reasons it is necessary to stay at the cleared flight level. On long haul flights, the pilot may climb from one flight level to a higher one as clearance is requested and given from air traffic control. This maneuver is called a step climb.

Commercial or passenger aircraft are usually designed for optimum performance at their cruise speed or VC. There is also an optimum cruise altitude for a particular aircraft type and conditions including payload weight, center of gravity, air temperature, humidity, and speed. This altitude is usually where the higher ground speeds, the increase in drag power, and the decrease in engine power and efficiency at higher altitudes are balanced.