For the tabletop games, see Warhammer Fantasy Battle and Warhammer 40,000. 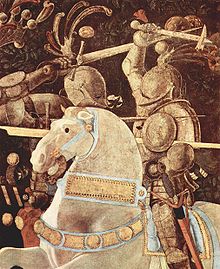 A war hammer is a late medieval weapon of war intended for close combat action, the design of which resembles the hammer. The war hammer consists of a handle and a head. The handle may be of different lengths, the longest being roughly equivalent to the halberd, and the shortest about the same as a mace. Long war hammers were pole weapons (polearms) meant for use against riders, whereas short ones were used in closer quarters and from horseback. Later war hammers often had a spike on one side of the head, thus making it a more versatile weapon.

War hammers were developed as a consequence of the ever more prevalent surface-hardened steel surfacing of wrought iron armors of the late medieval battlefields during the fourteenth and fifteenth centuries. The surface of the armour was now as hard as the edge of a blade, so a blade tended to ricochet. Swords, or the blade of a battleaxe, were likely only to give a glancing blow, losing much of the impact, especially on the high curvature of the helmet. The war hammer could deliver the full force to the target.

War hammers, especially when mounted on a pole, could damage without penetrating the armour. In particular, they transmitted the impact through even the thickest helmet and caused concussions. A blade or spike tended to be used against other parts of the body where the armour was thinner, and penetration was easier, than through the helmet. The spike end could be used for grappling the target's armour, reins, or shield, or could be turned in the direction of the blow to pierce even heavy armour. Against mounted opponents, the weapon could also be directed at the legs of the horse, toppling the armoured foe to the ground where he could be more easily attacked.

Other weapons that are types of war hammers include: