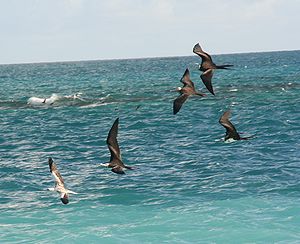 Great Frigatebirds chasing a Red-footed Booby in order to steal its food.

Kleptoparasitism or cleptoparasitism (literally, parasitism by theft) is a form of feeding in which one animal takes prey or other food from another that has caught, collected, or otherwise prepared the food, including stored food (as in the case of cuckoo bees, which lay their eggs on the pollen masses made by other bees). The term is also used to describe the stealing of nest material or other inanimate objects from one animal by another.

The kleptoparasite gains either by obtaining prey or other objects that it could not obtain itself, or by saving the time and effort required to obtain it. However, the kleptoparasite may run the risk of injury from the victim if it is able to defend its property.

Animals that have extraordinarily specialized feeding methods are often targets of kleptoparasitism. For example, oystercatchers are unusual in being able to break through the shells of mussels; adult oystercatchers suffer intraspecific kleptoparasitism from juveniles that are not yet strong or skillful enough to open mussels easily. Diving birds that bring their prey to the surface suffer interspecific kleptoparasitism from gulls, which are unable to fetch fish from the sea floor themselves. Chinstrap penguins also actively engage in kleptoparasitism, being known to steal rocks and other nest materials from members of their colony for use in their own nest. 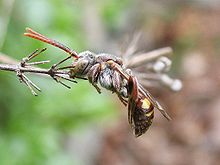 A cuckoo bee from the genus Nomada.

There are many different lineages of cuckoo bees, all of which lay their eggs in the nest cells of other bees. There is also a family of cuckoo wasps, many of which lay their eggs in the nests of potter and mud dauber wasps; many other lineages of wasps in various families have evolved similar habits. These insects are normally referred to as "kleptoparasites," rather than as "brood parasites." The distinction is that the term "brood parasite" is generally restricted to cases where the immature parasite is fed directly by the adult of the host, and raised as the host's offspring (as is common in birds). Such cases are virtually unknown in bees and wasps, which tend to provide all of the food for the larva before the egg is laid; in only a few exceptional cases (such as parasitic bumblebees) will a bee or wasp female feed a larva that is not her own species. The difference is only in the nature of the interaction by which the transfer of resources occurs (tricking a host into handing over food rather than stealing it by force or stealth), which is why brood parasitism is considered a special form of kleptoparasitism.

The miltogrammine fly Craticulina seriata is a kleptoparasite of sand wasps, depositing its larvae on the food reserved for the larvae of the wasp.

Some flies are kleptoparasites, this being especially common in the subfamily Miltogramminae of the family Sarcophagidae. There are also some kleptoparasites in the families Chloropidae and Milichiidae. Some adult milichiids, for example, visit spider webs where they scavenge on half-eaten stink bugs. Others are associated with robber flies (Asilidae), or Crematogaster ants.[1] Flies in the genus Bengalia (Calliphoridae) steal food and pupae transported by ants and are often found beside their foraging trails.[2]

Many semiaquatic bugs (Heteroptera) are known to engage in kleptoparastism of prey. In one study, whenever the bug Velia caprai (Water cricket) took prey heavier than 7.9 g, other bugs of the same species joined it and successfully ate parts of the prey.[3]

Kleptoparasitic spiders, which steal or feed on prey captured by other spiders, are known to occur in five families:

Kleptoparasitism is relatively uncommon in birds.[5] However, some non-passerine groups, such as skuas, jaegers and frigatebirds, rely extensively on such behavior to obtain food, and others—including raptors, gulls, terns, coots, and some ducks and shorebirds—will do so opportunistically. Among opportunistic species such as the Roseate Tern, research has found that parent birds involved in kleptoparasitism are more successful in raising broods than non-kleptoparasitic individuals.[6] Bald Eagles can also be seen attacking smaller raptors, such as Ospreys, to steal fish away from them.[7] Among passerine birds, there are fewer known examples of kleptoparasitism, though Masked Shrikes have been recorded stealing food from wheatears,[8] and Eurasian Blackbirds have been seen stealing smashed snails from other thrushes.[5]

Skuas (including the smaller species known as jaegers in North America) are masters of piracy. Their victims are typically gulls and terns, though other fish-eating species (including auks) are also pursued until they disgorge their catches. The fact that skuas are swift and agile fliers—and that they sometimes gang up on a single victim—aid in their success rate.

During seabird nesting seasons, frigatebirds will soar above seabird colonies, waiting for parent birds to return to their nests with food for their young. As the returning birds approach the colony, the frigatebirds (which are fast and agile) drop down and pursue them vigorously; they have been known to seize tropicbirds by their long tail plumes. Many of the frigatebirds' colloquial names, including Man-o'-War Bird and Pirate of the Sea, are a clear reference to this kleptoparasitic behaviour.[9] A study of kleptoparasitism in the Magnificent Frigatebird suggests that the amount of food obtained by kleptoparasitism may be marginal.[10] 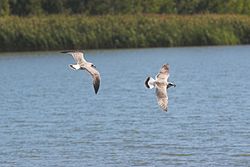 Gulls are the perpetrators as well as the victims of kleptoparasitism, with some species frequently exhibiting the behavior, particularly during the breeding season. While the victim is most often another member of the same species, other (principally smaller) gulls and terns are also targeted. In the Americas, Heermann's Gulls and Laughing Gulls are known to steal food from Brown Pelicans; as the pelicans surface and empty the water from their bills, the gulls lurk nearby and grab escaping food items.[11]

Several species of coots and gallinules have been recorded engaging in kleptoparasitism.[12] American Coots often feed in the company of other waterfowl species, and occasionally will rob diving ducks—including Ring-necked Ducks, Redheads and Canvasback—when they surface with food. Eurasian Coots steal from conspecifics, as well as from diving and dabbling ducks, and swans. Allen's Gallinules rob both conspecifics and African Pygmy Geese.

The relationship between Spotted Hyenas and Lions, in which each species steals the other's kills,[13] is a form of kleptoparasitism.[3] All hyena species engage in this behavior when they can, and jackals also steal from other carnivores' kills.[14] Sperm Whales sometimes steal fish from fishermen's lines, making them the largest of all kleptoparasites.[15]

Humans have been found to chase away lions from their captured prey and consume the meat themselves. A researcher noted the behaviour in Waza National Park, Cameroon in 2006, and other ecologists have suggested that the behaviour may be widespread but often goes unrecognised. Interviews with Bororo herdsmen suggested that they often chase lions away from their prey. This kleptoparasitism may be contributing to the decline of lion populations within the national park.[16][17]