Championship Off Road Racing (usually abbreviated CORR) was a sanctioning body for offroad racing in the United States. It formed in 1998 and went bankrupt in 2008. Its races were nationally televised.

CORR was formed in 1998 by ESPN announcer Marty Reid.[1] It displaced the SODA series at the premiere short course off-road racing series when most of the drivers in SODA moved to CORR. The series was purchased by Jim Baldwin in 2005.

Baldwin canceled two of the rounds at Las Vegas in October 2008. In a press release, he stated: "Championship Off Road Racing has made the difficult decision to cancel the Primm, Nevada race on October 25th and 26th. The current credit crisis has made it very difficult to cover CORR’s costs."[2] He filed for bankruptcy and abandoned the sanctioning body's facilities in Chula Vista, California.[3]

There were ten classes in the series. 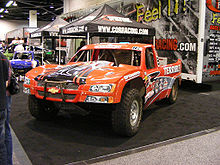 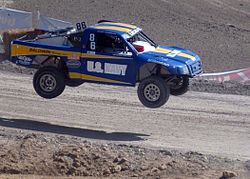 Josh Baldwin competes in the Pro-2 series during the 2005 Nissan Nationals at the Chula Vista International Raceway in Chula Vista, Calif., courtesy of U.S. Navy