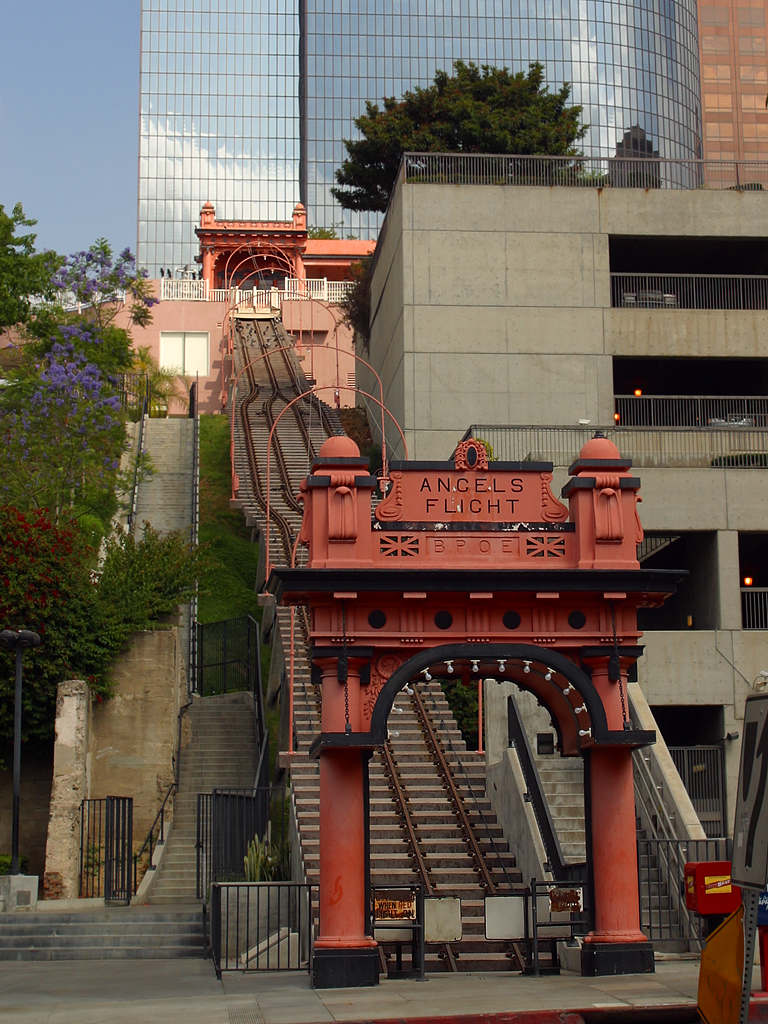 Angels Flight is a landmark in the Bunker Hill district of downtown , which claims to be the "shortest railway in the world". But shorter ones are contained in the item below listing other funiculars - notably the three in Bournemouth, England. The funicular has operated on two slightly different sites, using the same cars. The first Angels Flight operated from 1901 until it was closed in 1969 when its location was redeveloped. The second reopened nearby in 1996, and closed again in 2001 after a serious accident. The second funicular still exists but does not operate, and it has been scheduled to reopen on several occasions.

Built in 1901 as the Los Angeles Incline Railway, running northwest from the west corner of Third and Hill Streets, Angels Flight consisted of two carriages pulled up a steep incline by metal cables powered by engines at the top of the hill. As one car ascended, the other descended, carried down by gravity. The two cars were named Sinai and Olivet.

The first Angels Flight was a conventional funicular, with both cars connected to the same haulage cable. Unlike most more modern funiculars it did not have s for use in the event of a cable breaking, but it did have a separate safety cable which would come into play in case of breakage of the main cable. It operated for 68 years with a good safety record.

The railway was closed in 1969 when the Bunker Hill area underwent a total redevelopment which transformed it from a declining community of mostly transients and working-class families renting rooms in run-down buildings to a modern mixed-use district of high-rise commercial buildings and modern apartment complexes. All the components of Angels Flight were placed in storage in anticipation of the railway's restoration and reopening.

After 27 years in storage, the funicular was rebuilt and reopened in 1996 a half block south of the original site. Although the original cars were used, a brand new track and haulage system was designed and built, a redesign which had unfortunate consequences five years later. As rebuilt, the funicular was 91 meters (298 feet) long on an approximately 33-percent grade. Car movement was controlled by an operator inside the upper station house, who was responsible for: visually determining that the track and vehicles were clear for movement, closing the platform gates, starting the cars moving, monitoring the operation of the funicular cars, observing car stops at both stations, and collecting fares from passengers. The cars themselves did not carry any staff members.

On February 1, 2001, Angels Flight suffered a serious accident that killed passenger Leon Praport, 83, and injured seven others, including Praport's wife, Lola. The accident occurred when car Sinai, approaching the upper station, reversed direction and accelerated downhill in an uncontrolled fashion to strike Olivet near the lower terminus.

The (NTSB) conducted an investigation into the accident, and determined that the probable cause was the improper design and construction of the Angels Flight funicular drive and the failure of the various regulatory bodies to ensure that the railway system conformed to initial safety design specifications and known funicular safety standards. The NTSB further remarks that the company that designed and built the drive, control, braking, and haul systems, /Yantrak, is no longer in business, and that the whereabouts of the company's principal is unknown.

Unlike the original, the new funicular used two separate haulage systems (one for each car), with the two systems connected to each other, the drive motor and the service brake by a ; it was the failure of this gear train which was the immediate cause of the accident as it effectively disconnected Sinai both from Olivet's balancing load and from the service brake. There were s which acted on the rim of each haulage drum, but due to inadequate maintenance Sinai's emergency brake was inoperative. Contrary to what might be expected, the new funicular was constructed with neither safety cable nor track brakes, either of which would have prevented the accident; the NTSB was unable to identify another funicular worldwide that operated without either of these safety features.

Besides the design failures in the haulage system, the system was also criticised by the NTSB for the lack of gates on the cars, and the absence of a parallel walkway for emergency evacuation. The funicular suffered serious damage in the accident, and will require major redesign before it can be permitted to reopen. At present the cars have been removed for safe storage, and the system no longer operates.

Several reopening dates have been announced, but none have come to pass. In early 2008, the railway president indicated that the railway would open soon. The reported that Angels Flight would open in late 2008.

*It appeared in the opening scenes of the film "" in full operation.
*It appeared in the "Perry Mason" television series in which Perry's car was "stripped." The 1966 episode, the only one of the original series filmed in color, was called "The Case of the Twice Told Tale."
*Angels Flight is shown in Robert Aldrich's "" (1955) and "The " (1956). It is also seen in detail in "" (1965).
*"Angels Flight" was also the name and locale of a crime novel by .
*There are references to Angels Flight in the song "Strange Season" on 's 1992 album "Free-for-All," and the cover features images of the line and a ticket stating, "Good for one ride".
*A scene in "" (1948) features escaping from pursuers on one of the cars.
*There is also a scene in Robert Siodmak's 1949 film noir, "Criss Cross" where the gangsters are planning the armored car heist. The cars can be seen through a window going up and down, first in daylight, then in darkness, to illustrate the passage of time.
*In a 1920 short comedy, "" a bored wife leaves a note for her husband: "I was too lonesome here without you. I have gone up Angels Flight&mdash;meet me up above". He jumps to the conclusion she has committed suicide and attempts to kill himself as well.
*In the game , Angels Flight is a gap where the player can grind up or down the rails, the gap being called "Angel Going Up!" or "Angel Going Down!"
*It was shown at the opening to an episode of , with 's voice-over: "...for five cents, ride the shortest railway in the world."
*Angels Flight was also the name of a 1980's-1990's Hair metal band based in McKinney, Texas.

*The correct name for the railway is "Angels Flight", which is grammatically incorrect as there is no possessive before or after the 's'. The film of the same name, however, "does" include an apostrophe. In addition, "Angels" is misspelled as "Ancels".

*The decorative Beaux-Arts archway entrance and station house were added around 1910. The original archway was a simple cast iron pipe structure with a two-feet-high cherub and the name Angel's Flight (with an apostrophe) above it.

*The initials that appear on the archway, 'BPOE', stand for the , who once had a lodge in a large building adjacent to the top of the original flight.