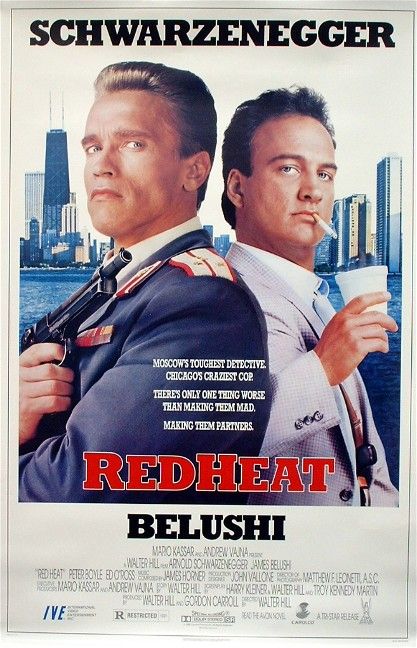 "Red Heat" is a 1988 directed by Walter Hill. The film stars: , as narc Ivan Danko; , as detective Art Ridžić. Finding themselves on the same case, Danko and Ridžić work as partners to catch a cunning and deadly Soviet Georgian drug kingpin, Viktor Rostavili ()...who also happens to be the killer of Danko's previous partner back in Russia.

The movie was released with the "Moscow's toughest detective. Chicago's craziest cop. There's only one thing more dangerous than making them mad: making them partners." It was the first American film allowed to shoot in Moscow's . The French title of "Red Heat" is "Double Détente", a reference to the Soviet-American of the 1970s.

Loudmouthed Detective-Sergeant Art Ridžić () investigates several local murders committed by Viktor's cartel. Suddenly he finds himself partnered with Danko, who has chased Viktor here from Moscow with the intention of capturing the crime baron alive. Danko is frustrated when his lack of a diplomatic license prohibits him from carrying a weapon. He shares his candid observations with Ridžić: "This Chicago is very strange city. Your crime is organized, but your police is not."

Danko and Ridžić pursue Viktor and his henchmen around Chicago. Finally, Danko and Viktor commandeer a couple of Greyhound buses, then engage in a high-speed chase...until Viktor is side-slammed by a train. He takes on Danko in a running, Texas-style shootout (Danko uses a Ruger "Blackhawk" Magnum given to him by Ridžić); Viktor is gunned down. Danko returns to Moscow after exchanging wristwatches with Ridžić as an act of goodwill.