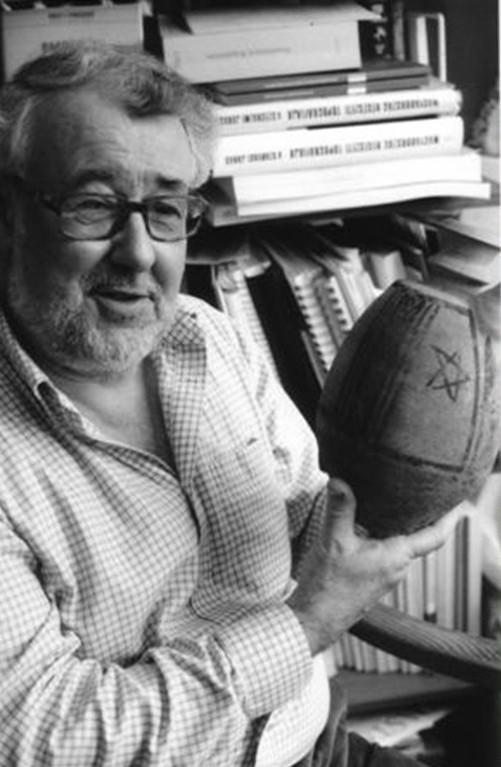 Andrew Sherratt (1946– ) was an English , one of the most influential of his generation.

Sherratt studied archaeology and at , completing his degree in 1968. He received his Ph.D. from Cambridge in 1976, writing on " 'The Beginning of the Bronze Age in south-east Europe' ". By then he had already moved to Oxford, having been appointed Assistant Keeper of Antiquities at the in 1973. At he received the title of Reader in 1997 and Professor in 2002. Oxford remained his academic home until 2005 when he took up a professorship at the . Sherratt travelled widely and received international recognition for his work. He was invited to give the prestigious Human Context and Society lectures at in 1998 and his topic was " 'Between Evolution and History: long-term change in human societies' ".

Perhaps Sherratt's most cited publication was " 'Plough and pastoralism: aspects of the secondary products revolution' ", published in 1981 in " 'Pattern of the Past: Studies in Honour of ' ", the first article in which he described his idea of a " '' ".

He regularly contributed outside of his main field, for instance through a position on the editorial board of the historical journal "Past and Present". [ [http://www.pastandpresent.demon.co.uk/index.html Past and Present Society] ] His ability to work at a continental, even global, scale of analysis has invited comparisons with .

Analysis at the continental scale led him into adaptation of world-systems theory to questions of change on the large scale in archaeology, notably in the first volume of the "Journal of European Archaeology" (" 'What would a Bronze Age world system look like? Relations between temperate Europe and the Mediterranean in later prehistory' ") and in his 1995 David Clarke Memorial Lecture, also published in "JEA": " 'Reviving the grand narrative: Archaeology and long-term change' ". Such interests in linking across continents meant that Andrew maintained an interest in all the major shifts in humanity from global colonisation, through the spread of agriculture to the development of metallurgy and urbanism, including the Indo-European question and the development of new forms of consumption. A collection of his most significant publications in many of these areas appeared in 1996 as Economy and Society in Prehistoric Europe: changing perspectives.

Sherratt's interest in broad scale patterns in history (really pre-history) attracted perhaps his most prestigious accolades, such as when the University of Chicago's historian William McNeill conferred a portion of the prestigious he won in 1996 upon Sherratt. The Erasmus Prize, awarded annually by the Dutch Praemium Erasmianum Foundation 'for exceptionally important contributions to European culture', requires the winner to pass on his prize-money to chosen nominees. [ [http://www.erasmusprijs.org/eng/index.htm Erasmus Prize] ] [ [http://www.ox.ac.uk/gazette/1996-7/weekly/060297/news/story_5.htm Erasmus success for prehistorian] ]

Sherratt recognised the importance of and to early culture, and he wrote "Consuming Habits, Drugs in History and Anthropology". Sherratt was invited to present the four part television series, , which aired to critical acclaim in 1998.

Sherratt was always a stimulating and inspirational teacher. He had a significant hand in designing Oxford's undergraduate course in archaeology and anthropology, playing a key role as an interlocutor in the development of a new generation of archaeologists who drew from social anthropology as well as archaeology. However, presenting his ideas at the appropriate scale has been a constant challenge, as is reflected in an early edited work, the "Cambridge Encyclopedia of Archaeology", published in 1980 and subsequently translated into German, French, Italian, Dutch and Swedish.

Shortly before his death of a heart attack in (near ), Andrew had initiated a project, ArchAtlas, that uses modern remote sensing technology, combined with image and text, to graphically communicate complex patterns of change and interaction across time and space. [ [http://www.archatlas.dept.shef.ac.uk/IndexAAP2.htm ArchAtlas] ]