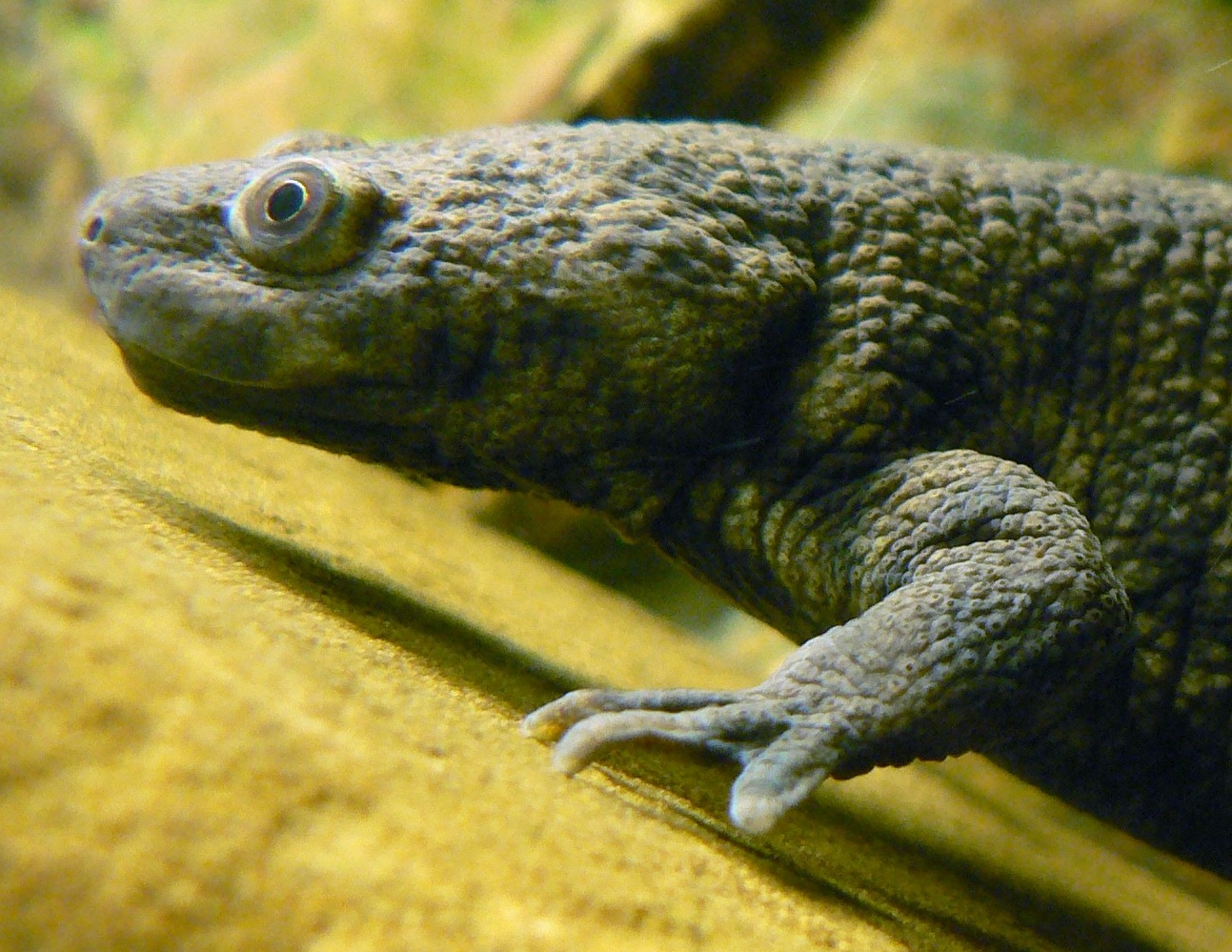 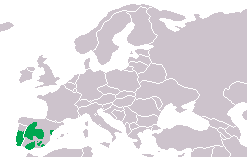 range_map_caption = Distribution in the Iberian peninsula (Morocco not shown)

The Iberian Ribbed Newt or Spanish Ribbed Newt ("Pleurodeles waltl") is a endemic to the central and southern and . It is known for its sharp ribs which can puncture through its sides, and as such is also called the Sharp-ribbed Newt.

The Iberian Ribbed Newt has s running down each side. Through these, its sharp ribs can puncture. The ribs act as a defense mechanism, causing little harm to the newt. Ejection of the ribs rarely occurs in captive animals.

In the wild this amphibian grows up to 30 cm, but rarely more than 20 cm in captivity. Its color is dark grey on the back and lighter grey on its ventral side with rust-colored small spots where its ribs protrude. These newts have a flat spade-shaped head and a long tail which is about half their body length.

Males are slenderer and usually smaller than females. The larvae have bushy external gills and usually paler color patterns than the adults.

The Iberian ribbed newts are far more aquatic-dwelling than other European tailed amphibians. Even though they are quite able to walk on land, most rarely leave the water, living usually in ponds, cisterns and ancient village wells that were common in and in the past. They prefer cool, quiet and deep waters, where they feed on insects, worms and tadpoles.

Sex determination is regulated by s, but can be overridden by temperature. Females have both sex chromosomes (Z and W), while males have two copies of the Z chromosome (ZZ). However, when ZW larvae are reared at 32 °C (90 °F) during a particular stages of development (stage 42 to stage 54), they differentiate into functional s.

play an important role during the sex determination process, and the newts can be manipulated to change sex by adding hormones or hormone-inhibitors to the water they are reared in.

, an -synthesizing which acts as a hormone, plays a key role in sex determination in many non-mammalian s including the Iberian Ribbed Newt. [Sandra Kuntz, et al. Cerebral and gonadal aromatase expressions are differently affected during sex differentiation of "Pleurodeles waltl", Journal of Molecular Endocrinology (2004) 33, 717-727  [http://jme.endocrinology-journals.org/cgi/content/full/33/3/717] ] It is found in higher levels in the es in ZW larvae than in their ZZ counterparts, although not in heat-treated ZW larvae. The increase occurs near the final stages of which their sex can be determined by temperature (stage 52).

The listed the Iberian Ribbed Newt as in its 2006 . It received this listing because its wild populations appear to be in significant decline due to widespread habitat loss and the effects of invasive species, thus making the species close to qualifying for Vulnerable. Previously, in 2004, the species had been listed as , the lowest ranking. This species is generally threatened through loss of aquatic habitats through drainage, , the impacts of livestock (in ), , domestic and industrial contamination, golf courses, and infrastructure development. It has largely disappeared from coastal areas in Iberia and Morocco close to concentrations of tourism and highly populated areas (such as 's outskirts). Introduced fish and crayfish ("") are known to prey on the eggs and larvae of this species, and are implicated in its decline. Mortality on roads has been reported to be a serious threat to some populations.

"Pleurodeles waltl" has been studied in space on at least six missions. The first Iberian Ribbed Newts in space may have been in 1985 on board [Mitashov, V.; et al. Lens and limb regeneration in newt during and after 13-day long spaceflight [http://www.csa.com/partners/viewrecord.php?collection=TRD&recid=N9025252AH] ] . The ten newts shared their journey with two s and ten rats, in an otherwise crewless Soviet . In 1992, [Grinfeld, S.; et al. Tissue regeneration in space (spinal cord, muscle and bone) in the amphibian "Pleurodeles waltl". Life Sciences Research in Space, ESA SP-366. European Space Agency, 1994., p.181 [http://adsabs.harvard.edu/abs/1994lsrs.conf..181G] ] [Experience Triton on BION-10: Study of peptidase-1 expression in embarked "Pleurodeles" females and detection of genetic abnormalities in their progeny [http://adsabs.harvard.edu/abs/1994lsrs.conf..171D] ] also carried the newts on board, as did [Grigoryan, E. N, et al. amphibians in studies on microgravity: effects upon organ and tissue regeneration. Advances in Space Research, Volume 30, Issue 4, p. 757-764. [http://adsabs.harvard.edu/abs/2002AdSpR..30..757G] ] in 1996.

The newts were chosen because they are a good for the study of [Gualandris-Parisot L, et al. Adv Space Res. 2001;28(4):569-78. "Pleurodeles waltl", amphibian, Urodele, is a suitable biological model for embryological and physiological space experiments on a vertebrate.] . They are a good model organism because of the female's ability to retain live sperm in her for up to 5 months, allowing her to be inseminated on Earth, and later (in space) have fertilisation induced through hormonal stimulation. Another advantage to this species is that development is slow, so all the key stages of can be observed: from the to swimming tailbud embryos or larvae.

On the ground, studies of (up to 3"g") on "P. waltl" fertilisation have also been conducted [Aimar C, et al. Microgravity and hypergravity effects on fertilization of the salamander Pleurodeles waltl (urodele amphibian). Biol Reprod. 2000 Aug;63(2):551-8. [http://www.biolreprod.org/cgi/content/full/63/2/551] ] , as well as on the fertility of the space-born newts once they arrived back on Earth [Dournon C, Durand D, Tankosic C, Membre H, Gualandris-Parisot L, Bautz A. Effects of microgravity on the larval development, metamorphosis and reproduction of the urodele amphibian "Pleurodeles waltl" Dev Growth Differ. 2001 Jun;43(3):315-26. [http://www.blackwell-synergy.com/doi/abs/10.1046/j.1440-169x.2001.00575.x] ] (they were fertile, and without problems).