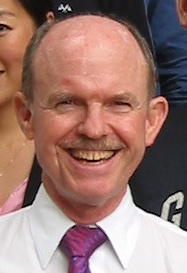 Kendall Newcomb Houk (born 1943) is a Professor of Chemistry at the .

Mechanism and understanding of pericyclic reactions

Houk's work has made the transition states of pericyclic reactions nearly as familiar as ground states of organic molecules. His investigations of potential energy surfaces for s for two decades have led to a thorough understanding of the geometries and energies of transition structures for all types of pericyclic reactions. These calculations show that such reactions are synchronous in the absence of unsymmetrical substituents. Houk discovered that there are normal bond lengths for transition structures of hydrocarbon pericyclic reactions. He provided an explanation of Zewail’s femtosecond dynamics measurements for hydrocarbons and made new generalizations about conical intersections involved in excited state reactions.

Houk discovered a powerful and unanticipated substituent effect in s of substituted s. Transition state calculations for the reaction of cyclobutenes led to the theory of "torquoselectivity," as he named it, a arising from preferential direction of rotations of the terminal substituents accompanied by a torque on the breaking bond. The better the donor, the greater the preference for outward rotation. A prediction was made that a would rotate inward preferentially, to give the less stable product; Houk's group at UCLA verified this prediction experimentally. This major extension of the Woodward-Hoffmann rules has blossomed into a general principle of stereoselectivity, and experimental examples continue to be discovered in many labs.

A series of publications combining computations with experimental measures of isotope effects in the literature or from Singleton's group have established the nature of transition states of several classic organic processes: the , Cope and s, peracid epoxidations, carbene and triazolinedione cycloadditions, and the . The three-dimensional structures of transition states have become nearly as well-understood as the stable structures, largely due to his efforts.

Houk pioneered the modeling of transition states with force field methods. Even before modern searching tools existed, ab initio calculations were used to locate geometries of transition states and to determine force constants for distortions away from these preferred geometries. These developments showed more generally how computational techniques could be useful tool for synthetic organic chemists. The whole concept of "transition state modeling" has developed from Houk's pioneering contributions.

Houk has provided a rigorous theoretical treatment of reactivity as well as a general conceptual model for understanding reactions of these reactive intermediates. He showed how entropy control of reactivity and negative activation barriers both could be explained by a new, unified model in which reactions had no enthalpic barriers but do have significant entropic - and, therefore, free energy - barriers. The theory has had an impact on the interpretation of fast organic reactions.

Houk has recently made a major contribution to the understanding of molecular recognition. The discovery that a conformational process ("gating") is the rate-determining step in complex formation and dissociation of Cram's hemicarceplexes has produced a new design element in host design. The ability to compute rates of such reactions have been first developed in his laboratories. The investigation of stabilities and mechanisms of catenanes and rotaxanes has already led to discovery of gating phenomena and electrostatic stabilization of these complexes.

Dynamic effects are a recent focus of the Houk group beginning with a collaboration with Singleton using MD parameterized with semiempirical potentials and more recently using Born Oppenheimer MD and metadynamics.Fact|date=September 2008

Houk's recent work on catalytic antibodies and enzymes increased understanding of the quantitative aspects of these complex phenomena. He established quantitative comparisons of host-guest complex binding energies and of the effectiveness of enzymes in biological catalysts.

*Chairman of the UCLA Department of Chemistry and Biochemistry from 1991-1994.
*Director of the chemistry division of the from 1988-1990.
*Director, UCLA Chemistry-Biology Interface Training Program, NIH-supported training grant. 2002-present
*Chair, AAAS Chemistry Section, 2005
*Senior Editor,
*Chair of the NIH Synthesis and Biological Chemistry Study SessionFact|date=September 2008
*member of the NIH Medicinal Chemistry Study Section
*member of NRC Board of Chemical Sciences and Technology
*Advisory board of the Chemistry Division of the National Science Foundation
*Advisory board of the Petroleum Research Fund
*Advisory boards of journals including Accounts of Chemical Research, the Journal of Organic Chemistry, Chemical and Engineering News, and the Journal of Computational Chemistry [ [http://www.chem.ucla.edu/dept/Faculty/houk/biosketch.html|UCLA Department of Chemistry and Biochemistry K.N. Houk faculty profile page] ]