The House of Representatives is a democratically elected body, usually consisting of 120 members (currently 122 due to an overhang) known as Members of Parliament. Members are elected for limited terms, holding office until Parliament is dissolved (a maximum of three years).

New Zealand essentially follows the Westminster system of government, and is governed by a cabinet and Prime Minister commanding a majority in the House of Representatives.

The House of Representatives was established by the British New Zealand Constitution Act 1852 which established a bicameral legislature, but the upper house, the Legislative Council, was abolished in 1951 so Parliament is now unicameral. Parliament received full control over all New Zealand affairs in 1947 with the passage of the Statute of Westminster Adoption Act.

The executive branch of the New Zealand government (the Cabinet) draws its membership exclusively from the House of Representatives, based on which party or parties can claim a majority. The Prime Minister (PM) leads the government: the Governor-General appoints the Prime Minister from a party or coalition which appears to have enough support in the House to govern. This support is immediately tested through a Motion of Confidence. The current government is a coalition between the National Party, ACT Party, United Future and the Maori Party; the Prime Minister is John Key. The Leader of the Opposition is the leader of the largest opposition party. Currently the Leader of the Opposition is Phil Goff of the Labour Party.

Election to the House is by the Mixed Member Proportional (MMP) electoral system, which provides for proportional representation. The MMP system means that there are usually several parties present in the House — at present, there are seven. The MMP system replaced the old "first-past-the-post" system after a referendum in 1993. The first MMP vote was at the 1996 election.

a The loss of seven seats by 'other parties' shown here compared to the 2005 election result was mostly due to NZ First failing to clear the MMP threshold while two independents, Gordon Copeland and Taito Phillip Field, who had split from their parties since the 2005 election lost their seats.
b The Māori Party gained two overhang seats (increasing parliament's size from 120 to 122 seats) by virtue of gaining more electorate seats than their party vote would have given them. This was one more overhang seat then 2005.
c"Party Votes and Turnout by Electorate". Chief Electoral Office, New Zealand Ministry of Justice. http://2008.electionresults.govt.nz/e9/html/e9_part9_1.html. Retrieved 2008-11-29.
dThe turnout is given as a percentage of those enrolled to vote. In New Zealand, enrolment is compulsory, though voting is not. "New Zealand General Election 2008 - Official Results". Elections New Zealand. http://www.elections.org.nz/news/2008-election-official-results.html. Retrieved 2008-11-23. 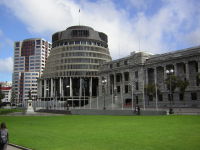 The New Zealand Parliament's model for passing Acts of Parliament is similar (but not identical) to that of other Westminster System governments.

Laws are initially proposed to the House of Representatives as bills. They become Acts after being approved three times by House votes and then receiving the Royal Assent from the Governor-General. The majority of bills are promulgated by the government of the day (that is, the party or parties that have a majority in the House). It is rare for government bills to be defeated, indeed the first to be defeated in the twentieth century was in 1998. It is also possible for individual MPs to promote their own bills, called member's bills — these are usually put forward by opposition parties, or by MPs who wish to deal with a matter that parties do not take positions on. Local government and private individuals (for $2000 and only affecting themselves) may also bring forward legislation.

Proxy voting is allowed, in which members may designate a party or another member to vote on their behalf. An excuse is required.[1]

The first stage of the process is the First Reading. The MP introducing the bill (often a minister) will give a detailed speech on the bill as a whole. Debate on the bill generally lasts two hours, with 12 MPs making ten-minute speeches (although they can split their speaking time with another MP) on the bill's general principles. Speaking slots are allocated based on the size of each party, with different parties using different methods to distribute their slots among their MPs.

The MP introducing the bill will generally make a recommendation that the bill be considered by an appropriate Select Committee (see below). Sometimes, it will be recommended that a special Committee be formed, usually when the bill is particularly important or controversial. The House then votes as to whether the bill should be sent to the Committee for deliberation. It is not uncommon for a bill to be voted to the Select Committee stage even by parties which do not support it — since Select Committees can recommend amendments to bills, parties will often not make a final decision on whether to back a bill until the Second Reading.

The Second Reading, like the first, generally consists of a two-hour debate in which MPs make ten-minute speeches. Again, speaking slots are allocated to parties based on their size. In theory, speeches should relate to the principles and objects of the bill, and also to the consideration and recommendations of the Select Committee and issues raised in public submissions. Parties will usually have made their final decision on a bill after the Select Committee stage, and will make their views clear during the Second Reading debates. At the conclusion of the Second Reading debate, the House votes on whether to accept any amendments recommended by the Select Committee by majority (unanimous amendments are not subjected to this extra hurdle).

The Government (usually through the Minister of Finance) has the power (given by the House's Standing Orders) to veto any bill (or amendment to a bill) that would have a major impact on the Government's budget and expenditure plans. This veto could be invoked at any stage of the process, but if applied to a bill as a whole would most likely be employed at the Second Reading stage. This has not occurred since the veto power was introduced in 1996, although many amendments have been vetoed at the Committee of the whole House stage (see below).

If a bill receives its Second Reading, it goes on to be considered by a Committee of the whole House.

Committee of the whole House

When a bill reaches the Committee of the whole House stage, the House resolves itself "Into Committee", that is, it forms a committee consisting of all MPs (as distinct from a Select Committee, which consists only of a few members). When the House is "In Committee", it is able to operate in a slightly less formal way than usual.

During the Committee of the whole House stage, a bill is debated in detail, usually "part by part" (a "part" is a grouping of clauses). MPs may make five-minute speeches on a particular part or provision of the bill and may propose further amendments, but theoretically should not make general speeches on the bill's overall goals or principles (that should have occurred at the Second Reading).

The extent to which a bill changes during this process varies. If the Select Committee that considered the bill did not have a government majority and made significant alterations, the Government may make significant "corrective" amendments. There is some criticism that bills may be amended to incorporate significant policy changes without the benefit of Select Committee scrutiny or public submissions, or even that such major changes can be made with little or no notice. However, under the MMP system when the Government is less likely to have an absolute majority, any amendments will usually need to be negotiated with other parties to obtain majority support.

The Opposition may also put forward wrecking amendments. These amendments are often just symbolic of their contrasting policy position, or simply intended to delay the passage of the bill through the sheer quantity of amendments for the Committee of the whole House to vote on.

The final Reading takes the same format as the First and Second Readings — a two-hour debate with MPs making ten-minute speeches. The speeches once again refer to the bill in general terms, and represent the final chance for debate. A final vote is taken. If a bill passes its third reading, it is passed on to the Governor-General, who may (assuming constitutional conventions are followed) give it Royal Assent as a matter of law. It then becomes law.

Legislation is scrutinised by select committees. The committees can call for submissions from the public, thereby meaning that there is a degree of public consultation before a parliamentary bill proceeds into law. The strengthening of the committee system was in response to concerns that legislation was being forced through, without receiving due examination and revision. Each select committee has a chairperson and a deputy chairperson. MPs may be members of more than one select committee.

For the 48th Parliament, which finished with the 2008 general election in November 2008, there were 18 select committees in the House of Representatives, as follows:

The House also has several other important functions.