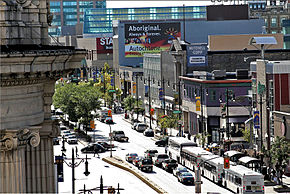 Downtown Winnipeg is centred around Portage Avenue and Main Street, and is bounded by the Assiniboine River on the south, Colony and Balmoral Streets on the west, Notre Dame Avenue, Princess Street, and Logan Avenue on the north, and the Red River on the east. It includes the Exchange District, Central Park, The Forks, and Winnipeg's Chinatown. The downtown area is roughly three square kilometres. Portage Avenue is the city's busiest thoroughfare. Winnipeg Square, the MTS Centre, Portage Place, and the flagship store of the Bay are all located on the downtown section of this street.

On Main Street are Winnipeg's City Hall, Union Station, and the Manitoba Centennial Centre, which includes the Manitoba Museum, the Planetarium, the Centennial Concert Hall and the Winnipeg Railway Museum. Although over 60,000 people work downtown, only 12,720 (2001 Census) people actually live in the Downtown area.

There are several residential projects under construction on Waterfront Drive and in the Exchange District, and the residential population of the area is projected to increase substantially in the next few years.

The Downtown Winnipeg Zoning By-Law defines the boundaries of the Downtown planning area, and several sectors within it. The downtown census area is slightly smaller, omitting a three-block extension at the north edge. There is also a significantly larger Downtown community area, used for Community Social Data Strategy for Winnipeg.[1]

The Waterfront District is a newly emerging district located in the northeast corner of downtown Winnipeg. The area runs along the west bank of the Red River along the recently built Waterfront Drive. There are several condominium projects recently completed or currently being built as well as plans for even more redevelopment.

Central Park is one of Winnipeg's most densely populated neighbourhood with 13,755 people per square km according to Statistics Canada's 2001 Census. 70 per cent of all refugees coming to Winnipeg live downtown, in and around the Central Park area. Central Park includes many different ethinicities including Arabs, Vietnamese, Chinese, Ojibway, Filipinos, and African (more than half being African).

With the increase in the African population, Central Park has been transforming in recent years. It is now the home to the 'Central Market', with more markets planned to come. Many of the markets will sell handmade fashion and imported African crafts. 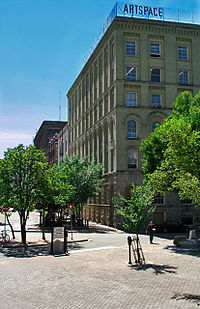 The Exchange District is Winnipeg's historical warehouse district. The district, because of its rich abundance of turn-of-the-twentieth-century buildings is increasingly being utilized as a location for filming as it resembles similar areas in large Midwest American cities, such as Chicago. There have been several initiatives to revitalize the historic district such as Red River College's Downtown Campus on Princess Street as well as several loft and condominium projects. The district is also home to the annual Winnipeg Fringe Festival, the second most attended in Canada. 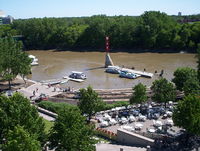 The Forks Marina flooded by the Assiniboine River in 2005

The Forks is a national historic site located in downtown Winnipeg where the Assiniboine and Red Rivers meet. It has been a meeting place for people for over 6000 years and is a popular place for tourists and Winnipeggers alike. The Canadian Museum for Human Rights will be at the Forks. 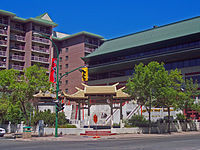 South Portage is the group of blocks located between Portage Ave., Main St., Broadway and Memorial Blvd. Many notable Winnipeg institutions are located in South Portage such as the Millennium Library, the Winnipeg Convention Centre, MTS Centre, the Law Courts and Cityplace. Winnipeg's public transit hub is located on the Graham Avenue Transit Mall, as many bus routes converge there. There are numerous office buildings and hotels in this area, including some of Winnipeg's tallest buildings.

Winnipeg's Chinatown covers a few square blocks to the northwest of City Hall and is home to about 600 people of whom nearly 80% are Chinese. The area is popular for its many authentic Chinese restaurants.