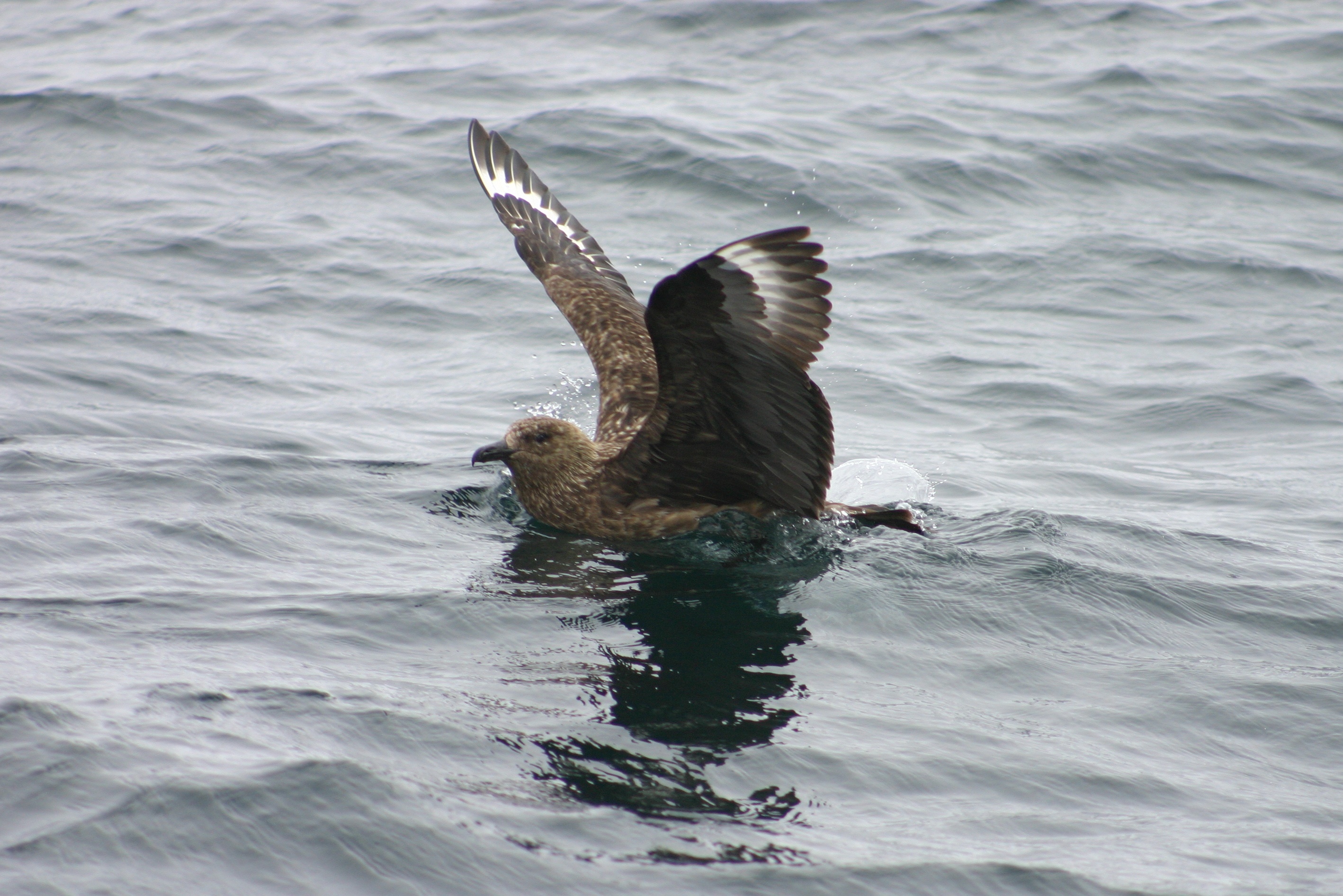 The Great Skua, "Stercorarius skua", is a large in the family Stercorariidae. In Britain, it is sometimes known by the name Bonxie, a name of unknown origin. [Haswell-Smith, Hamish. (2004) "The Scottish Islands". Edinburgh. Canongate.]

This is a large skua 50–58cm in length with a 125–140cm wingspan. It breeds in , , the and the Scottish islands, with a few on mainland Scotland. It breeds on coastal moorland and rocky islands, usually laying two spotted olive-brown eggs in grass-lined nests. Like other skuas, it will fly at the head of a human or other intruder approaching its nest. Although it cannot inflict serious damage, such an experience with a bird of this size is frightening. It is a migrant, wintering at sea in the and regularly reaching n waters.

This eats mainly fish, which it often obtains by robbing s, s and even Gannets of their catches. It will also directly attack and kill other seabirds, up to the size of s. Like most other skua , it continues this piratical behaviour throughout the year, showing less agility and more brute force than the smaller skuas when it harasses its victims. A common technique is to fly up to a Gannet in mid-air and grab it by the wing, so that it stalls and falls into the sea, where the Great Skua then physically attacks it until it surrenders its catch.

Adults are streaked greyish brown, with a black cap, juveniles are a warmer brown and unstreaked below. Their tail is short and blunt. The flight is direct and powerful. This Skua's call is a harsh "hah-hah-hah-hah"; quacking and croaking noises have also been heard. Distinguishing this skua from the other North Atlantic skuas (, and ) is relatively straightforward. The size, massive barrel chest and white wing flashes of this bird are distinctive even at a distance. It is sometimes said to give the impression of a (which in America would be called a hawk). Identification of this skua is only complicated when it is necessary to distinguish it from the closely related large southern-hemisphere skuas. Some authorities still regard the Great Skua as conspecific with some of these southern skuas, and as a group they have sometimes been separated in the genus "Catharacta", although currently this is not commonly followed.

Unusual behaviour by St Kilda's Skuas was recorded in 2007 during research into recent falls in the population. Using night vision gear, ecologists observed the skuas predating on the petrels at night, a remarkable strategy for a seabird. [ [http://news.bbc.co.uk/1/hi/scotland/highlands_and_islands/7069755.stm "Bird night attacks may be unique"] ( ) BBC News. Retrieved on .]