Closed-circuit television (CCTV) cameras can produce images or recordings for surveillance purposes, and can be either video cameras, or digital stills cameras. Marie van Brittan Brown was the inventor of the CCTV camera. 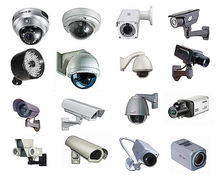 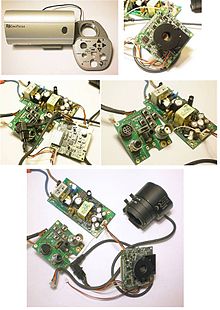 Looking at the inside of a CCTV camera. 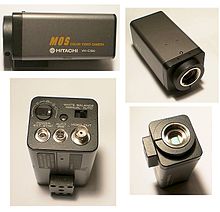 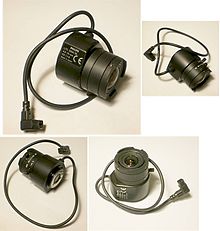 A couple of CS-mount lenses for surveillance cameras. The left one is designed to be hidden behind a wall.

Can record straight to a video tape recorder which are able to record analogue signals as pictures. If the analogue signals are recorded to tape, then the tape must run at a very slow speed in order to operate continuously. This is because in order to allow a 3 hour tape to run for 24 hours, it must be set to run on a time lapse basis which is usually about 4 frames a second. In one second, the camera scene can change dramatically. A person for example can have walked a distance of 1 meter, and therefore if the distance is divided into 4 parts i.e. 4 frames or 'snapshots' in time, then each frame invariably looks like a blur, unless the subject keeps relatively still.

Analogue signals can also be converted into a digital signal to enable the recordings to be stored on a PC as digital recordings. In that case the analogue video camera must be plugged directly into a video capture card in the computer, and the card then converts the analogue signal to digital. These cards are relatively cheap, but inevitably the resulting digital signals are compressed 5:1 (MPEG compression) in order for the video recordings to be saved on a continuous basis.

Another way to store recordings on a non-analogue media is through the use of a digital video recorder (DVR). Such a device is similar in functionality to a PC with a capture card and appropriate video recording software. Unlike PCs, most DVRs designed for CCTV purposes are embedded devices that require less maintenance and simpler setup than a PC-based solution, for a medium to large number of analogue cameras. 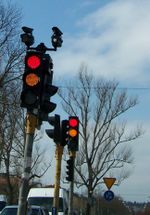 These cameras do not require a video capture card because they work using a digital signal which can be saved directly to a computer. The signal is compressed 5:1, but DVD quality can be achieved with more compression (MPEG-2 is standard for DVD-video, and has a higher compression ratio than 5:1, with a slightly lower video quality than 5:1 at best, and is adjustable for the amount of space to be taken up versus the quality of picture needed or desired). The highest picture quality of DVD is only slightly lower than the quality of basic 5:1-compression DV.

However, in any situation where standard-definition video cameras are used, the quality is going to be poor because the maximum pixel resolution of the image chips in most of these devices is 320,000 pixels (analogue quality is measured in TV lines but the results are the same); they generally capture horizontal and vertical fields of lines and blend them together to make a single frame; the maximum frame rate is normally 30 frames per second.

That said, multi-megapixel IP-CCTV cameras are coming on the market. Still quite expensive, but they can capture video images at resolutions of 1, 2, 3, 5 and even up to 11 Mpix. Unlike with analogue cameras, details such as number plates are easily readable. At 11 Mpix, forensic quality images are made where each hand on a person can be distinguished. Because of the much higher resolutions available with these types of cameras, they can be set up to cover a wide area where normally several analogue cameras would have been needed.

Looking at the inside of a network camera. From left to right: network adapter, power supply, CPU, image encoder, image sensor.

IP cameras or network cameras are analogue or digital video cameras, plus an embedded video server having an IP address, capable of streaming the video (and sometimes, even audio).

Because network cameras are embedded devices, and do not need to output an analogue signal, resolutions higher than CCTV analogue cameras are possible. A typical analogue CCTV camera has a PAL (768×576 pixels) or NTSC (720×480 pixels), whereas network cameras may have VGA (640×480 pixels), SVGA (800×600 pixels) or quad-VGA (1280×960 pixels, also referred to as 'megapixel') resolutions.

An analogue or digital camera connected to a video server acts as a network camera, but the image size is restricted to that of the video standard of the camera. However, optics (lenses and image sensors), not video resolution, are the components that determine the image quality.

There continues to be much debate over the merits and price-for-performance of IP cameras as compared to analog cameras. Many in the CCTV industry claim that many analog cameras can outperform IP cameras at a lower price.

These cameras can be purchased in any high street shop and can take excellent pictures in most situations.

The pixel resolution of the current models have easily reached 7 million pixels (7-mega pixels). Some point and shoot models like those produced by Canon or Nikon boast resolutions in excess of 10 million pixels.

At these resolutions, and with high shutter speeds like 1/125th of a second, it is possible to take jpg pictures on a continuous or motion detection basis that will capture not only anyone running past the camera scene, but even the faces of those driving past.

These cameras can be plugged into the USB port of any computer (most of them now have USB capability)and pictures can be taken of any camera scene. All that is necessary is for the camera to be mounted on a wall bracket and pointed in the desired direction.

Modern digital still cameras can take 500 kb snapshots in the space of 1 second, and these snapshots are then automatically downloaded by the camera software straight to the computer for storage as timed and dated JPEG files. The images themselves don't need to stay on the computer for long. If the computer is connected to the Internet, then the images can automatically be uploaded to any other computer anywhere in the world, as and when the pictures are taken.

The user doesn't need to lift a finger except to simply plug the camera in and point it in the desired direction. The direction could just as easily be the street outside a house, or the entrance to a bank or underground station.

Digital still cameras are now being made with in-built wireless connectivity, so that no USB cable is required; images are simply transmitted wirelessly through walls or ceilings to the computer.