Croquette
For the game, see croquet. For the comic book, see Croket!. 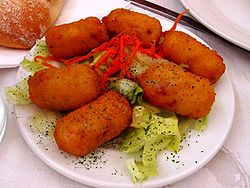 A croquette is a small fried food roll containing usually as main ingredients mashed potatoes, and/or ground meat (veal, beef, chicken, or turkey), shellfish, fish, vegetables, and soaked white bread, egg, onion, spices and herbs, wine, milk, beer or any of the combination thereof, sometimes with a filling, often encased in breadcrumbs.[1] The croquette is usually shaped into a cylinder or disk, and then deep-fried. The croquette (from the French croquer, "to crunch") gained worldwide popularity, both as a delicacy and as a fast food. 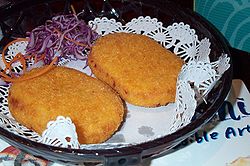 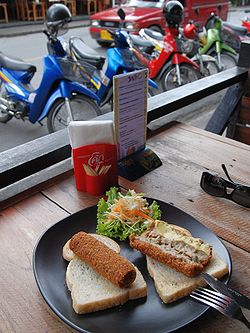 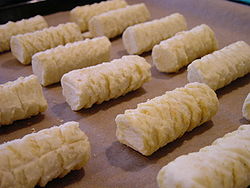 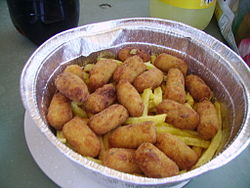 Alu chop (Bengali: আলু চপ alu chôp "potato croquette") is a popular croquette served throughout Bangladesh, primarily as an appetizer or snack. The center is traditionally filled with ground beef, peas, or other savory fillings. The potatoes are mashed and mixed with a mixture of minced green chilis, minced fried onions, and bread crumbs.[2] Each alu chop (formed into a ball or egg-shape) is then breaded and deep-fried. It is often served with a chutney or sauce.

Mashed potato filled 'kroketten' are often served as a side dish in winter holiday meals, such as Christmas. In fast food cuisine, varieties exist without potatoes but with cheese, beef or goulash, often in a filling based on béchamel sauce. The Dutch version of little balls, bitterballen, is also found in snackbars. A typical Belgian variety is filled with grey shrimp - 'garnaalkroketten'. They are typically garnished with a slice of lemon and some deep fried parsley.

Croquettes,[3] primarily made from beef, are sold in many parts of Brazil.

Sweet pumpkin-based croquettes are often served in conjunction with the Dragon Boat Festival.

Plain potato croquettes (sometimes with some cottage cheese added) are commonly served with steaks or stews or as a snack. They are available frozen or refrigerated in most supermarkets.

Cuban, Dominican Republic and Puerto Rican croquettes (known as croquetas) are usually made of ham, beef, chicken, fish or cheese. They are generally flour-based instead of using potatoes. A potato-based version is the Papa rellena ("stuffed potato"), which is made from picadillo rolled in a layer of mashed potatoes and then deep fried.

Krokety[4] are small round balls usually made from potatoes, eggs, flour, butter, and salt that are deep fried in oil. This variety can be ordered in most restaurants as a side dish as well as bought frozen and prepared at home.

Plain potato croquettes[5] are served as side dish in restaurants and are also available frozen in supermarkets. They are usually called Kroketten (singular Krokette, fem.).

"Krokett" is a small cylindrical croquette similar to the Czech variety: potatoes, eggs, flour, butter, seasoned with nutmeg and salt and deep fried in oil. This variety can be ordered in most restaurants as a side dish, and also bought frozen. When made with cottage cheese they are called turókrokett.[6]

A potato-filled croquette called Aloo tikki[7] is very famous in northern India and is typically served with a stew. They are mostly eaten as snacks at home and are also popularly sold by road-side vendors. In the Indian state of West Bengal it is called alu chop similar to Bangladesh. Sometimes it is called a "cutlet" and eaten plain or as a fast food variation that is served inside a hamburger bun (like a vegetarian burger). Meat croquettes called 'kababs' are made with minced goat meat. Lightly spiced beef croquettes are a popular snack and appetizer among Goan Catholics owing to their Portuguese influence, though consumption of beef is not common in India except for places like goa and kerala.[8]

A relative of the croquette, known as korokke[10] ( コロッケ ) is a very popular fried food, widely available in supermarkets and butcher shops, as well as from specialty korokke shops. Generally patty-shaped, it is mainly made of potatoes with some other ingredients such as vegetables (e.g. onions and carrots) and maybe less than 5% meat (e.g. pork or beef). It is often served with tonkatsu (とんかつ) sauce. Cylindrically-shaped korokke are also served, which more closely resemble the French version, where seafood (prawns or crab meat) or chicken in white sauce (ragout) is cooled down to make it harden before the croquette is breaded and deep-fried. When it is served hot, the inside melts. This version is called "cream korokke" to distinguish it from the potato-based variety. It is often served with no sauce or tomato sauce. Unlike its Dutch cousin, croquettes made mainly of meat are not called korokke in Japan. They are called menchi katsu (メンチカツ), short for minced meat cutlets.

Usually called Goroke (고로케) or Keuroket (크로켓),[11] it is a food that is sold in most bread shops in Korea. The most common type of Goroke are deep fried rolls stuffed with Japchae (잡채) ingredients or chicken curry. There are also Goroke filled with Kimchi, pork, and sometimes Bulgogi ingredients. Many Koreans stores often advertise the Goroke as a French product and is usually sold in most European style bread stores all over Korea.

Croquettes are usually made of tuna or chicken[12][13] and potatoes.

Like Bangladesh, Aloo Chop is a popular side dish, more so because of influence of food from India.

Whereas previously the dish was regarded as a French cuisine delicacy of varying meat or vegetable content, in the 1800s it became a way to use up leftover stewed meat. After World War II, several suppliers started mass-producing croquettes[14] filled with beef. The croquette subsequently became even more popular as a fast food; meat ragout covered in breadcrumbs which is subsequently deep-fried. Its success as a fast food garnered its reputation as a cheap dish of dubious quality, to such an extent that Dutch tongue in cheek urban myths relate its "allegedly mysterious content" to offal and butchering waste. The "kroket" is even so popular that a disk-shaped version on a bun is sold at McDonalds. The success of the croquette lead to a whole series of food products resembling the croquette, but with other types of fillings such as noodles rice, and kidney, and with names as bamibal, nasibal and nierbroodje instead of croquette, variants of the croquette which specify the kind of meat (veal or calf meat) can also be found, as rundvleeskroket and kalfsvleeskroket. Also popular in Dutch snack bars is the satékroket where the filling consists of a peanut satay sauce and shredded meat in a ragout. A smaller round version of the standard beef or veal kroket, the bitterbal,[14] is often served with mustard as a snack in bars and at receptions. Potato croquettes, and potato balls (similar to potato croquettes, but small and round) can be bought frozen in most food-stores in-between frozen french fries and frozen pre-cooked potato slices. They are considered to be in name only "croquettes".

The Filipino 'croqueta' is derived no doubt from the Spanish colonial era, but unlike the bechamel-filled croquetas in Spain, Filipino croquetas are made with mashed potatoes and chopped meat or fish, usually leftovers. Like most Spanish-influenced foods in the Philippines, croquetas ares served mainly in middle and upper class households.

Croquettes in Poland[15] are basically made from a thin rolled pancake stuffed with mushrooms, meat, cabbage, sauerkraut or combinations of those ingredients, then covered in breadcrumbs, fried in a pan and usually served with a clear soup like borscht.

Croquetes[16] are cylindrical, covered in breadcrumbs, and deep-fried. They are usually made with white sauce and beef, sometimes mixed with varying amounts of pork, and frequently with some chouriço, black pepper, bacalhau or piri-piri to add more flavour. Seafood, fish and vegetarian (potato) croquetes are also eaten in Portugal, but less often.

The widespread котлета рубленная[17] (from French cotelette) is made of minced meat (beef or pork or mixture of both, chicken, turkey or even fish), bread, eggs, white onions, salt and spices, shaped as a meat patty and pan fried. Bread is added in amount up to 25% of meat, adding softness to the final product and also making it cheaper to produce. Another popular variation similar to French cotelettes de volaille is Chicken Kiev, made from boned chicken breast pounded and rolled around cold unsalted butter, then breaded and fried.

A wide variety of croquettes exists in Serbian cuisine, but the most well known one is Karađorđeva šnicla or the "Karadjordje's steak" (which can be considered a variation on Cordon Bleu).

Croquettes,[18] especially filled with jamón or chicken, are also a typical tapas dish. Unfilled bechamel croquettes are also consumed in parts of Spain.

Potato croquettes can be bought frozen in most foodstores, but they are not very popular.

Ukrainian croquettes are called картопляники (kartoplyanyky) (the most common name in the south). They are made with mashed potatoes (with flour, egg and spices) in a round pancake or oval shape with a thickness of about 1.5–2 cm without stuffing, or stuffed with mushrooms and meat. Used as a garnish in a simple form and in various sauces, often with prunes.

Plain potato croquettes[19] are available frozen[20] or refrigerated in most supermarkets.

"Boardwalk" fish cakes and crab cakes, eaten on the east coast of the United States, are essentially croquettes. They consist, respectively, of chopped fish or crab meat, mixed in a buttery dough which is then breaded and deep-fried.

A deviled crab (croqueta de jaiba) is a particular variety of a blue crab croquette from Tampa, Florida. The crab meat is seasoned with a unique Cuban-style enchilada / sofrito sauce (locally known as "chilau"[21]), breaded with stale Cuban bread crumbs, formed into the approximate shape of a prolate spheroid, and fried. It is meant to be eaten with one hand. It originated in the immigrant community of Ybor City during a cigar workers strike in the 1920s[22][23][24] and is still very popular in the area.

Other types of crab and fish croquettes are made throughout the southern U.S., especially in coastal states such as Louisiana where seafood dishes are common staples. These varieties have different seasonings and shapes, with some served inside the scooped-out shell of the crab.

A traditional New England/Northeastern United States preparation uses ham, usually of the maple-cured variety, along with pre-cooked mashed potato (often mixed with some mild seasonings and a bit of milk or butter for a smoother consistency) for the outer roll. These are dipped in crumbed breading, and sautéed or fried in a small skillet using butter. Typically, these are most common during the Thanksgiving-to-Christmas holiday season as one of several ways to use up leftover holiday ham.

Another croquette dish popular across much of the American South is salmon croquettes. Any canned fish - usually salmon or mackerel, although canned tuna is also used in some recipes (although the dish is often colloquially referred to as "salmon croquettes" or "salmon patties" regardless of the actual fish used) - is mashed by hand to break up any fish bones and give the fish meat a smoother consistency, then combined with a binder and various seasonings. Seasonings typically include pepper, salt, chopped (sometimes sautéed) onions, garlic, lemon juice, and/or paprika. The binder can be any starch such as flour, cornmeal, matzo meal, ground crackers of any type, even white rice or oatmeal - although these latter variations are not as common, and are mostly limited to the northern U.S. Chopped eggs, parsley, and Parmesan cheese may also be added. The mixture is then shaped into rounded patties for pan- or deep-frying; corn or peanut oil are the most commonly used frying oils in the southern U.S., but canola, safflower, or olive oil are also used, and some recipes call specifically for pan-frying in butter or margarine.