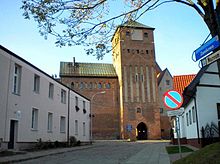 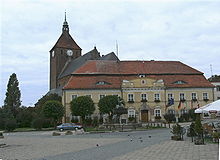 The town's market place with town hall and St. Mary's Church in the background.

Darłowo [darˈwɔvɔ] (in full The Royal City of Darłowo: Polish: Królewskie Miasto Darłowo, German: Rügenwalde) is a town at the south coast of the Baltic Sea in Middle Pomerania, north-western Poland, with 14,931 inhabitants (2006). Located in Sławno County in West Pomeranian Voivodeship since 1999, it was previously a town in Koszalin Voivodeship (1950–1998).

Numerous archeological findings reveal that, after the ice which had covered North-Eastern Europe had molten and the Ice-age had ended at about 8.000 B.C., settlers of the Stone Age first populated the region.[1] Remainders of Celtic culture and Germanic culture, as well as of Baltic culture, influenced by contacts with Rome's merchants, were found in the area. Several Roman coins with portraits of Roman Emperors were found around Darłowo.[citation needed]

On Ptolemy's chart of Germania Magna a settlement of the Rugians called Rugium is listed in the vicinity of a river which probably is identical with the Grabowa River flowing into the Wieprza river.[2][3]

The town of Rügenwalde was probably founded in 1270 by Wizlaw II of the Danish Principality of Rügen, at that time also ruler of the Lands of Schlawe and Stolp. The first mention of Rügenwalde is in a document of February 5, 1271.[5] The settlement decayed.[6][7]

In 1277, Wizlaw II had sold his rights concerning the lands of Rügenwalde and Schlawe to the margraves of Brandenburg, who thereafter ruled these lands from Buckow up to the year of 1283.[8] According to a Polish encyclopedia, the town of Rügenwalde has been destroyed in 1283 during fights between Wizlaw II and Mestwin II (Polish: Mszczuj or Mściwój).[9] In a chronic of 1652, M. Merian stated that it had been destroyed on purpose by Bogislaw of Pomerania, when after Mestwin's II death in December 1294 duke Przemysŀ had claimed the town for Pomeralia, as he had done already five years before, and could not be persuaded to peacefully give up his claim and to withdraw from there.[10] In a decisive battle of 1296, the Polish invasion troops were beaten near the village of Buckow by a Pomeranian contingent led by duke Wizlaw of Rügen and count Adolph from Holstein. The retreating Polish troops devastated the castle of Dirlow and the town once more.

The town passed to the Duchy of Pomerania in 1347,[21] at that time ruled by the brothers Bogislaw V, Wartislaw V, and Barnim IV of the House of Pomerania dynasty. Bogislaw, son-in-law of king Casimir III of Poland, would become ruler of the area after the partition of Pomerania-Wolgast in 1368. This part duchy was known as Pomerania-Stolp.

In 1352 the construction of the castle began, and cooperation with the Hanseatic League (Hanse) was initiated, with the town becoming a full member of the Hanse in 1412. In 1382 Eric of Pomerania, later the king of Norway, Denmark and Sweden, was born in the town. After losing his thrones, he returned to his birthplace and began to expand his duchy. After his death in 1459 he was buried in St. Mary's Church.

After Eric's death the town was ruled by duke Eric II of Pomerania-Wolgast.[22]

Another significant ruler was Bogislaw X (1454–1523). Under his administration the trade and prosperity in the area of Darłowo grew, as international trade relations were extended, also with Poland.

In 1497 and 1552 the harbour of the town, known in German as Rügenwaldermünde, and parts of the town were hit by great storms. Ships which had got out of control were seen drifting in the vicinity of the town and of the neighbouring village of Suckow. In 1589, 1624, 1648, 1679 and 1722 fires damaged the town. The first lighthouse was built around the year 1715.

After the death of the last Pomeranian Duke Bogislaw XIV in 1637, the end of the contemporary Thirty Years' War in 1648 and the subsequent partition of the Duchy of Pomerania between the Swedish Empire and Brandenburg-Prussia in the Peace of Westphalia and the Treaty of Stettin (1653), Brandenburg included Farther Pomerania with Rügenwalde in her Pomeranian province. The harbour of Rügenwaldermünde was destroyed during the Thirty Years' War by imperial troops, and was reconstructed by order of King Frederick II of Prussia not before 1772.

During the Napoleonic Wars some of its inhabitants, in particular ship owners and businessmen, profited from smuggling British goods to the continent. In 1871 the town, along with Prussia, became a part of the reconstituted second German Empire. A railway reached the town in 1878. 289 inhabitants died throughout World War I.

In 1935 the important Firing Test Range Rügenwalde-Bad (German: Schießplatz Rügenwalde-Bad), designed for testing heavy guns, including long-range railway type of cannons such as Krupp K5, was built between Rügenwalde's habour Rügenwaldermünde and the village of Suckow.[24] During World War II some of the largest guns in military history were tested here: Schwerer Gustav and Mörser Karl. Gun barrels with a length of up to 47 meters were tested. For long distance tests, target areas within the Baltic Sea North of Großmöllendorf and Henkenhagen (about 80 kilometers away from Rügenwaldermünde) and North of Dievenow and Swinemünde (120 to 130 kilometers away) were used. The test camp was currently visited by officers of the commanding staff of Germany's army, air force and marine, including Admiral of the Fleet Erich Raeder and marshals von Rundstedt, Wilhelm Keitel and Hermann Göring. Once the resort hade been visited also by Adolf Hitler accompanied by Benito Mussolini. Their trains, however, had not stopped at Rügenwalde's train station.

After the End of World War II

During World War II families from the bombarded German towns of Hagen und Bochum in the Ruhr district had been evacuated to Rügenwalde. Short before the end of World War II numerous refugees from East Prussia and West Prussia arrived in the region. In early 1945, about 5.600 persons could escape by ships in the framework of the Operation Hannibal before Soviet Troops reached the town on March 7, 1945. About 3.500 citizens had remained in the town or returned again after their escape had failed.[25]

Following an agreement at the Potsdam Conference, after the end of World War II Rügenwalde was put together with Farther Pomerania under Polish administration. Its thorough German population was expelled[26][27][28] and the town was populated with Poles and Lemkos in 1946/47, who mostly came from regions East of the Curzon Line[citation needed]. The first expulsion of the residual German inhabitants took place on 17 October 1945, followed by a series of further expulsions beginning on 17 August 1946. In 1949 only about 70 Germans were left in the town.

The town was given the Polish name Dyrłów, and later Darłów, before changing to the current name.

Today the city is well known in Poland as a summer resort. A coast aquapark with desalted sea water is available here, the only one in Poland. 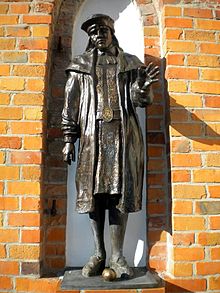 Statue of King Eric the Pomeranian at Darłowo Castle

The whole area of the Old Town in Darłowo is under preservation. Darłowo has maintained the unique medieval urban planning with the main square in the middle of the town. During medieval times the town was surrounded by walls and had four gates; only one gate has survived in a fairly original shape. 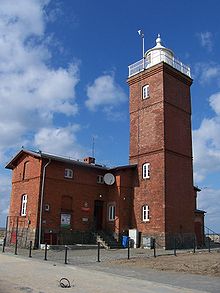 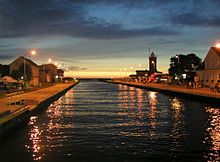 Since the Reformation had taken place in Pomerania, the vast majority of the city's population was composed of Protestants.

Darłowo is twinned with: