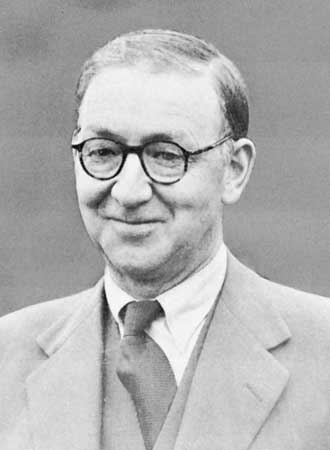 Sir John Douglas Cockcroft OM, KCB, CBE (, &ndash; , ) was a British physicist. He received the in Physics for splitting the , and was instrumental in the development of .

Cockcroft was born in , the eldest son of a mill owner. He was educated at Todmorden Secondary School (1909-1914) and studied at the (1914-1915). He was a in the from 1915-1918. After the war ended, he studied Electrotechnical engineering at Manchester College of Technology from 1919 until 1920. Cockcroft received a mathematics degree from in 1924, and began research work under . In 1929 he was elected a Fellow of St. John's College.

In 1928 he began to work on the acceleration of s with . In 1932 they bombarded with high energy protons, and succeeded in transmuting it into and other s. This was one of the earliest experiments to change the of one element to a different nucleus by artificial means. This feat was popularly &ndash; if somewhat inaccurately &ndash; known as "splitting the atom".

At the outbreak of the he took up the post of Assistant Director of Scientific Research in the , working on . In 1944 he took charge of the Canadian Atomic Energy project and became Director of the Montreal Laboratory and , replacing who was considered a security risk. In 1946 he returned to Britain to set up the (AERE) at Harwell, charged with developing Britain's atomic power programme. He became the first director of AERE. Even when leaving the post he continued to be involved with Harwell. He was made a in 1944, knighted in 1948, and was created in 1953.

As director of the AERE he famously insisted that the discharge chimney stacks of the production reactors were fitted, at great expense, with high performance filters. Since this was decided after the stacks had been designed, they produced iconic lumps in the shape of the structures. The reactors were designed to remain clean and uncorroded during use, and as such it was not considered that there would be any particulate present for the filters to catch. These filters therefore were known as "" right up until the , when the core of one of the two reactors caught fire in 1957, at which point the nickname fell out of favour. The filters prevented a disaster from becoming a catastrophe.

In 1951 Cockcroft, along with Walton, was awarded the for his work in the use of accelerated particles to study the atomic nucleus. In 1959 he became the first Master of . He was president of the , the and the . Cockcroft served as chancellor of the from 1961-65.

Cockcroft married Eunice Elizabeth Crabtree in 1925 and had four daughters and one son. He died at , Cambridge, .

In the 1950s, the AERE commissioned a number of homes to be built in the nearby town of for the many Harwell workers who lived there. The 'focal' road of this development in the south of the town (i.e. with the shops, school and public house) is named Cockcroft Road.

* Cathcart, Brian, "", Penguin, 2005. ISBN 0-14-027906-7
* [http://janus.lib.cam.ac.uk/db/node.xsp?id=EAD%2FGBR%2F0014%2FCKFT The Papers of Sir John Cockcroft] are held at the [http://www.chu.cam.ac.uk/archives/collections/ Churchill Archives Centre] in Cambridge, and are accessible to the public. They include Cockcroft's lab books, correspondence, photographs (with dozens depicting the construction of Chalk River, CKFT 26/4), theses and political papers.

* [http://janus.lib.cam.ac.uk/db/node.xsp?id=EAD%2FGBR%2F0014%2FCKFT Biography] from
* [http://www.nobel.se/physics/laureates/1951/cockcroft-bio.html Biography from the Nobel Museum]
* [http://www.nobel-winners.com/Physics/john_douglas_cockcroft.html Another Nobel biography]
* [http://www.empireclubfoundation.com/details.asp?SpeechID=1578&FT=yes Speech to the Empire Club of Canada]
* [http://alsos.wlu.edu/qsearch.aspx?browse=people/Cockcroft,+John Annotated bibliography for John Cockcroft from the Alsos Digital Library for Nuclear Issues]