For parts of a distribution system, fuses are capable of both sensing and disconnecting faults.

Failures may occur in each part, such as insulation failure, fallen or broken transmission lines, incorrect operation of circuit breakers, short circuits and open circuits. Protection devices are installed with the aims of protection of assets, and ensure continued supply of energy. The three classes of protective devices are: 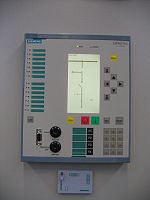 While the operating quality of these devices, and especially of protective relays, is always critical, different strategies are considered for protecting the different parts of the system. Very important equipment may have completely redundant and independent protective systems, while a minor branch distribution line may have very simple low-cost protection.

Protective device coordination is the process of determining the "best fit" timing of current interruption when abnormal electrical conditions occur. The goal is to minimize an outage to the greatest extent possible. Historically, protective device coordination was done on translucent log-log paper. Modern methods normally include detailed computer based analysis and reporting.

• Sequence of event recorders, which record equipment response to the event