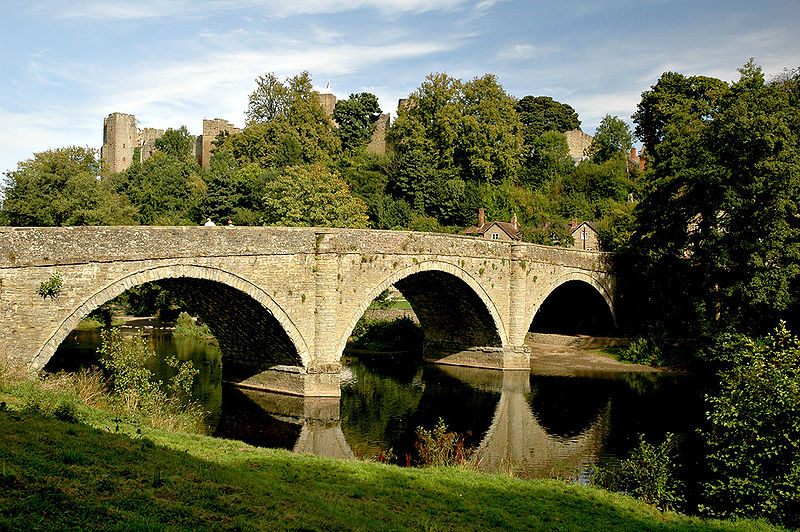 
map_size =
map_caption =The River Teme (Welsh "Afon Tefeidiad") rises in , south of Newtown in , and flows through in , then to the north of on the Shropshire/ border there, on its way to join the south of Worcester. The whole of the River Teme was designated as an , by , in 1996.

The river is crossed by a number of historic bridges including one at Tenbury Wells that was rebuilt by following flood damage in 1795. [ Teme Valley Times, Spring 2007, p2]

The river source is in Mid Wales on in the Kerry Hills near Dolfor, south of Newtown. Two other rivers - the and the - rise within 500 metres. It flows across the border into close to Knighton. From there to its confluence with the River Severn, at Worcester (about 60 miles/100 km downstream) it flows through the counties of , Shropshire and Worcestershire. The upper reaches of the river are usually steep with fast flowing but relatively shallow waters. There are some s, and a number of s, including several at the historic town of Ludlow. Below Tenbury Wells the river is more tranquil but still shallow, with strong cross currents. Water levels in the Teme are highly variable, something which has been made worse in recent years through increases in water extraction for agriculture use.

The Teme falls nearly 500 metres during its length from a height of 506 metres above at its source to just 14 metres above sea-level at its confluence with the River Severn. [ [http://leisure.ordnancesurvey.co.uk/leisure/ItemDetails.jsp?item=os_explorer_204#. Ordnance Survey: Worcester & Droitwich Spa] ]

The Teme has in recent times often bursts its banks. June and July 2007 saw serious floods in a number of areas, including Leintwardine, [ [http://www.youtube.com/watch?v=Lh2ZyvR_H4g You Tube - video of flooding] ] Tenbury Wells and Ludlow although the watercourse that flooded the latter location was a tributary, the River Corve. [ [http://www.ludlowadvertiser.co.uk/news/picturegallery/ Ludlow Advertiser] ]

It is the 14th longest river in the United Kingdom; top-10 for England and Wales.

is popular on many stretches of the Teme, with its barbel fishing being particularly noted.

Leisure boats have long been used on the river and rowing boats can still be hired at The Linney Park, . [ [http://www.visitsouthshropshire.co.uk/ludlow.htm Ludlow "England's finest market town" - Country Life] ] An annual regatta is held on the Teme. In June 2005 it was held at . In June 2006, the 12th regatta was held at . [ [http://www.coracle-fishing.net/leintwardine-2005/index.htm Leintwardine Coracle Society Annual Regatta] ]

A report in September 2003 entitled "Improving access for canoeing on inland waterways: A study of the feasibility of access agreements" stated::"There are no formal access agreements for canoeing on the Teme. However, unlawful canoeing does occur and there are many claims about the resulting conflict. As a result of its character, the demand for canoeing is seasonal, when there is enough water in the river, and is more in the upper reaches where the faster water can be found. However, this part of the river is also the most valuable for fishing, with riparian owners keen to protect their interests and prevent canoeing, on the grounds that the Teme is not suited to canoeing under any circumstances. While there is probably less conflict below Tenbury, there is also less interest in canoeing, and probably less opportunity, given the water levels."Information on canoeing on the Teme in the Ludlow area is available at http://www.ukriversguidebook.co.uk/teme.htm - information on the Tenbury Wells to Broadwas area is available at http://www.ukriversguidebook.co.uk/temetenbury.htm

Leisure boating in the past

Historical evidence of leisure boating includes:
*Old maps show a few boat houses along the river in Worcestershire. [Ordnance Survey, six-inch maps (1st edition), various: accessible at [http://www.old-maps.co.uk/ www.old-maps.co.uk] . ]
*"Billings Directory 1855" mentions Boat House, evidently a farmhouse, at Eastham (five miles downstream of Tenbury Wells). [ Billings Directory lists "Eckley Vincent, farmer, Boat House" at Eastham in 1855.] Boat House Farm still exists at Eastham [ [http://www.mercianarchaeology.co.uk/photos_to_web/pages/CNV00030_JPG.htm Internal framing of barn at Boat House farm, Eastham, Worcestershire] ]
*The boathouse at Newnham Bridge (three miles downstream of Tenbury Wells) was large enough, and substantial enough, to be converted into a house. [ [http://www.malvernhills.gov.uk/documents/pdf/A%20-%20Mins%20061004.pdf Northern Area Development Control Committee Minutes] of the Malvern Hills District Council, .]
*At Tenbury Wells in 1886, people were rescued during floods using a boat that had broken loose from its mooring so there must have been at least one boat on the river at that time. [F. Wayland Joyce, "Tenbury - Some Record of its History" (1931)]
*"Down Along Temeside" includes an account of travelling by boat from Ludford Mill to Orleton (a couple of miles upstream of Stanford Bridge) in the early 20th century. [Richard Holding, "Down Along Temeside" (1963).]

There is no doubt that the final convert|1.5|mi|km from bridge and to its confluence with the river Severn that the Teme is (or was) navigable. There was a near Powick Bridge, belonging with the mill, whose owner had the right to use a towing path to the river Severn. In the 18th century, was brought up the river to Powick forge (as the mill then was). [H. Lloyd, "The Quaker Lloyds in the Industrial Revolution" (1975), 148-50.]

There are two opposing views as to whether the river Teme was navigable by boats carrying cargo above Powick Mill for more than short distances or as ferries. Undoubtedly, navigation "would" have been very convenient for the s at , , but the proponents of navigation have not been able to bring forward any unequivocal documentary or archaeological evidence of its use. They allege that there were s to enable vessels to pass mill , as on the , but adduce no evidence of any, or of actual voyages.

An 1810 book states "The Teme is also navigable for barges from its junction with the Severn near Powick upwards to a small distance above Powick Bridge. The river having considerable declivity its navigation is soon interrupted by shoals and shallows" [William Pitt, "A General View of the Agriculture of the County of Worcester With Observations on the Means of Its Improvement" (Board of Agriculture, Great Britain) [http://books.google.co.uk/books?id=5BgAAAAAQAAJ&lpg=PA269&ots=gXDTnR8DyR&dq=teme+navigable&pg=PA269&ci=96,1023,717,198&source=bookclip"] ]

Maxwell Fraser writing in 1939 in the "Companion into Worcestershire", "comment on the River Teme", states "... half it course lies in Worcestershire, and the most easily navigated part is wholly in that county." [Maxwell Fraser "Companion into Worcestershire" (first published May 1939), quote from page 232 of 4th edition - 1949). ] In 1999 Colin Green claimed that traffic on the Teme began in Roman times and 'continued in Norman times, when it is known the stone for the mill at was brought from in the 14th century, using water transport all the way'. [Colin Green. "Severn Traders", Black Dwarf Publications (1999), ISBN 0953302822. p.33. ] However no earlier published source for this claim has been provided.

William Sandys (who improved the Avon) was at the same time also authorised to improve the Teme, but there is no evidence that he did so, perhaps due to his having used up all his resources on the Avon. Having failed to recover the Avon after the Restoration, Sir William Sandys and his son undertook work on the Wye and Lugg. [I. Cohen 'The non-tidal Wye and its navigation' "Transactions of the Woolhope Naturalists Field Club" 34 (1955), 83-101; P. King, 'The River Teme and Other Midlands Navigations' "Journal of Railway and Canal Historical Society" 35(5) (July 2006), 350-1. ]

One indication of commercial use of vessels above Powick is a newspaper advertisement in 1750 that the miller at had a boat for sale, capable of carrying 10 tons. [C. Hadfield, "Canals of the West Midlands" (1969), 58-9. ] Unless locks had been installed, this could not have operated over any great distance, as a boat of this size would have been unable to pass mill weirs. Evidence that has been offered in support of navigability at Ludlow consists of certain paintings (thought to date from c.1830) which show a river with boats. [ [http://worcestervistacom.bingohoroscope.com/images/paintingofludlow.jpgA painting allegedly of Dinham Bridge] , Ludlow.] It is not clear if these paintings show Ludlow as it actually was, or if they were at least partly derived from the artist's imagination.

In an article published in March 2006 in the , Pat Jones, reviewing the evidence, asserts that the Teme was navigable above . [ Pat Jones 'Navigation on the river Teme' "Journal of Railway and Canal Historical Society" 35(4) (March 2006), 293-300.] However in an article published in the same journal in July 2006 Peter King refutes this and writes that evidence of substantial commercial use of the river as a navigable waterway above Powick is minimal. [Peter King 'The River Teme and Other Midland Navigations' "Journal of Railway and Canal Historical Society" 35(5) (July 2006), 348-55. Correspondence about this also appears in the two subsequent issues. ]

wrote the following verse, which makes reference to the River Teme:cquote
In valleys of springs of riversBy Ony and Teme and ClunThe country for easy liversThe quietest under the sun