An investigator flashes victory signs upon the 2006 arrival of material gathered by the Stardust spacecraft at the Johnson Space Center in Texas.

The V sign is a hand gesture in which the index and middle fingers are raised and parted, while the other fingers are clenched. It has various meanings, depending on the cultural context and how it is presented. It is most commonly used to represent the letter V as in "victory", as a symbol of peace (usually with palm outward), as an offensive gesture (palm inward), to represent the number two, and as purely expressive gesture with no intended meaning. It was adopted by the 1960s counterculture movement as a sign for peace. 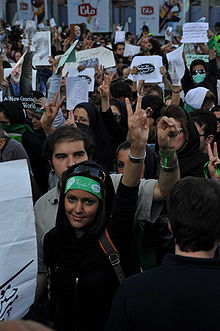 The sign's meaning depends in part on the way the hand is positioned. With the palm of the hand facing the signer, it can mean:

When used with other movement, it can mean:

With the back of the hand facing the signer, it can mean:

The insulting version of the gesture (with the palm inwards) is often compared to the offensive gesture known as "the finger". The "two-fingered salute", also known as "The Longbowman Salute", "the two" and as "The Tongs" in the West of Scotland and "the forks" in Australia,[6] is commonly performed by flicking the V upwards from wrist or elbow. The V sign, when the palm is facing toward the person giving the sign, has long been an insulting gesture in England,[7] and later in the rest of the United Kingdom; though the use of the inward peace sign as an insulting gesture is largely restricted to the UK, Ireland, Australia, and New Zealand.[1] It is frequently used to signify defiance (especially to authority), contempt, or derision.[8]

As an example of the V sign (palm inward) as an insult, on November 1, 1990, The Sun, a British tabloid, ran an article on its front page with the headline "Up Yours, Delors" next to a large hand making a V sign protruding from a Union flag cuff. The Sun urged its readers to stick two fingers up at then President of the European Commission Jacques Delors, who had advocated an EU central government. The article attracted a number of complaints about its alleged racism, but the now defunct Press Council rejected the complaints after the editor of The Sun stated that the paper reserved the right to use vulgar abuse in the interests of Britain.[9][10]

For a time in the UK, "a Harvey (Smith)" became a way of describing the insulting version of the V sign, much as "the word of Cambronne" is used in France, or "the Trudeau salute" is used to describe the one-fingered salute in Canada. This happened because, in 1971, show-jumper Harvey Smith was disqualified for making a televised V sign to the judges after winning the British Show Jumping Derby at Hickstead. (His win was reinstated two days later.)[11]

Harvey Smith pleaded that he was simply using a Victory sign, a defence also used by other figures in the public eye.[12] Sometimes foreigners visiting the countries mentioned above use the "two-fingered salute" without knowing it is offensive to the natives, for example when ordering two beers in a noisy pub, or in the case of the United States president George H. W. Bush, who, while touring Australia in 1992, attempted to give a "peace sign" to a group of farmers in Canberra—who were protesting about U.S. farm subsidies—and instead gave the insulting V sign.[13]

Also, in the opening credits for a number of seasons of Buffy the Vampire Slayer, Spike, who is British, is shown using the V sign as an insult to Xander Harris in a scene from the episode Hush.

On April 3, 2009, Scottish football players Barry Ferguson and Allan McGregor were permanently banned from the Scottish national squad for showing the V sign while sitting on the bench during the game against Iceland. Both players were in their hotel bar drinking alcohol after the Scottish defeat to Holland until around 11 am the next morning, meaning that both of the players breached the SFA discipline code before the incident as well, but the attitude shown by the V sign was considered to be so rude that the SFA decided never to include these players in the national line-up again.[14][15] Ferguson also lost the captaincy of Rangers as a result of the controversy.[16]

Steve McQueen the late American actor gives a British (knuckles outward) V sign in the closing scene in 1970s motorsport movie 'Le Mans'. A still picture of the gesture was also recorded by photographer Nigel Snowdon and has become an iconic image of both McQueen and the 24 hours of Le Mans.

Eric Young a TV news anchor in New Zealand was accidentally broadcast flashing the V sign to a producer off screen after a report on a Rugby match between Auckland and Counties Manukau.[17][18]

An early recorded use of the "two-fingered salute" is in the Macclesfield Psalter of c.1330 (in the Fitzwilliam Museum, Cambridge), being made by a glove in the Psalter’s marginalia.[7]

According to a popular legend, the two-fingered salute or V sign derives from the gestures of longbowmen fighting in the English army at the Battle of Agincourt (1415) during the Hundred Years' War.[7][19] According to the story, the French claimed that they would cut off the arrow-shooting fingers of all the English and Welsh longbowmen after they had won the battle at Agincourt.[20] But the English came out victorious and showed off their two fingers, still intact. Historian Juliet Barker quotes Jean Le Fevre (who fought on the English side at Agincourt) as saying that Henry V included a reference to the French cutting off longbowmen's fingers in his pre-battle speech.[21] If this is correct it confirms that the story was around at the time of Agincourt, although it does not necessarily mean that the French practised it, just that Henry found it useful for propaganda, and it does not show that the two-fingered salute is derived from the hypothetical behaviour of English archers at that battle.

The first possible known reference to the V sign in French is in the works of François Rabelais, a sixteenth-century satirist.[22] Rabelais's text is however unclear about the nature of the gesture.

It was not until the start of the 20th century that clear evidence of the use of insulting V sign in England became available, when in 1901 a worker outside Parkgate ironworks in Rotherham used the gesture (captured on the film) to indicate that he did not like being filmed.[23] Peter Opie interviewed children in the 1950s and observed in The Lore and Language of Schoolchildren that the much older thumbing of the nose (cock-a-snook) had been replaced by the V sign as the most common insulting gesture used in the playground.[12]

Desmond Morris discussed various possible origins of the V sign in Gestures: Their Origins and Distribution (published 1979), and came to no definite conclusion:

because of the strong taboo associated with the gesture (its public use has often been heavily penalized). As a result, there is a tendency to shy away from discussing it in detail. It is "known to be dirty" and is passed on from generation to generation by people who simply accept it as a recognized obscenity without bothering to analyse it... Several of the rival claims are equally appealing. The truth is that we will probably never know...
—Desmond Morris.[12]

The V for Victory campaign and the victory/freedom sign 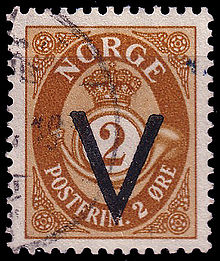 V for victory on a Norwegian stamp of August 1941. 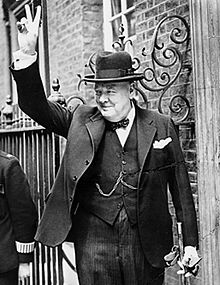 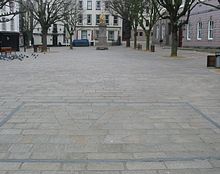 During the German occupation of Jersey, a stonemason repairing the paving of the Royal Square incorporated a V for victory under the noses of the occupiers. This was later amended to refer to the Red Cross ship Vega. The addition of the date 1945 and a more recent frame has transformed it into a monument.

On January 14, 1941, Victor de Laveleye, former Belgian Minister of Justice and director of the Belgian French-speaking broadcasts on the BBC (1940–1944), suggested in a broadcast that Belgians use a V for victoire (French: “victory”) and vrijheid (Dutch: "freedom") as a rallying emblem during World War II. In the BBC broadcast, de Laveleye said that "the occupier, by seeing this sign, always the same, infinitely repeated, [would] understand that he is surrounded, encircled by an immense crowd of citizens eagerly awaiting his first moment of weakness, watching for his first failure." Indeed, within weeks chalked up Vs began appearing on walls throughout Belgium, the Netherlands, and northern France.[24]

Buoyed by this success, the BBC set out a plan, the "V for Victory" campaign, for which they put in charge the assistant news editor Douglas Ritchie posing as “Colonel Britton”. Ritchie suggested an audible V using its Morse code rhythm (three dots and a dash). Having the same rhythm, the opening bars of Beethoven's Fifth Symphony was then used as the call-sign by the BBC in its foreign language programmes to occupied Europe for the rest of the war. The irony that they were composed by a German was not lost on many of the audience or for the more musically educated that it was "Fate knocking on the door" of the Third Reich. (

Listen to this call-sign. (help·info)).[24][25] The BBC also encouraged the use of the V gesture introduced by de Laveleye.[26]

By July 1941, the emblematic use of the letter V had spread through occupied Europe, and on July 19, Winston Churchill put the British government’s stamp of approval on the V for Victory campaign in a speech,[27] from which point he started using the V hand sign. Early on he used palm in (sometimes with a cigar between the fingers).[28] Later in the war he used palm out.[29] It is claimed that the aristocratic Churchill made the change after it was explained to him what it signified to the other classes in Britain.[12][30] Other allied leaders used the sign as well; since 1942, Charles de Gaulle used the V sign in every speech until 1969.[31]

British Occultist Aleister Crowley claimed to have invented the usage of a V-sign as a magical foil to the Nazis' use of the Swastika in February 1941. He maintained that he passed this to friends at the BBC, and to the British Naval Intelligence Division through his connections in MI5, eventually gaining the approval of Winston Churchill. Crowley pointed out that in his 1913 publication Magick a V-sign and a swastika appear on the same plate.[32] 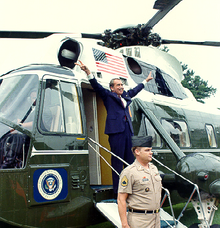 U.S. President Richard Nixon used it to signal victory, an act which became one of his best-known trademarks. He also used it on his departure from public office following his resignation in 1974.

A similar sign was used in protests against the Vietnam War (and subsequent anti-war protests) and by the counterculture as a sign of peace. Because the hippies of the day often flashed this sign (palm out) while saying "Peace", it became popularly known (through association) as the peace sign.[33] 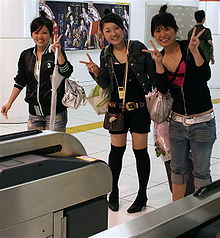 The palm-outwards V sign is very commonly made by Japanese people, especially younger people, when posing for informal photographs. One account of this practice claims that during the 1972 Winter Olympics in Sapporo, Hokkaidō, American figure skater Janet Lynn stumbled into Japanese pop culture when she fell during a free-skate period, but continued to smile even as she sat on the ice. Though she placed only third in the competition, her cheerful diligence and persistence resonated with many Japanese viewers, making her an overnight foreign celebrity in Japan. Lynn, a peace activist, was repeatedly seen flashing the V sign in the Japanese media thereafter. Though the V sign was known of in Japan before Lynn used it there (from the post-World War II Allied occupation of Japan), she is credited by some Japanese for having popularized its use in amateur photographs.[33] According to another theory, the V sign was popularized by the actor and singer Jun Inoue, who showed it in a Konica camera commercial in 1972.[citation needed]