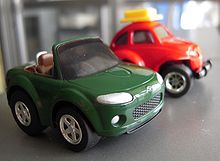 Choro-Q (チョロQ?) is a series of Japanese 3–4 cm long toy cars, with coil-spring pullback motors, first made by Takara in 1978, and sold extensively in Western markets as Penny Racers.

The name comes from the Japanese word "Choro-choro" which means "dash around" and an abbreviation of "cute" which in its Japanese adaptation connotes both the aesthetic meaning and also the meaning of petite in size.

The Choro-Q car designs are largely based on illustrations by Yasuhiro Nakamura (中村安広) who also design its covers for books and videogames.

Most Choro-Q feature real rubber tires (usually with larger ones on the rear) and the characteristic coil-spring pullback motor. Also, each Choro-Q is a "cute" squeezed design caricature of the actual vehicle it represents. This type of caricature is also known as "deformed scale" as it gives the car a foreshortened or deformed appearance. What is also distinct about the cars is the slot at the rear, where a small coin can be inserted for the wheelie effect.

The toy line is highly popular and has become collectible, even outside Japan, due to its low price and its merchandising line which includes JGTC and various licensed car editions and has also spawned a series of videogames bearing the same name. The toy line has also lent its moulding to the Transformers line of toys.

In addition to "Penny Racers", Choro-Q pullback cars were also marketed under the Tonka branding in the late 1980s as "Tonka Turbo Tricksters". "Penny Racers" in the US are still marketed by Funrise, but are less popular for collectors compared with their true-to-life counterparts marketed elsewhere, and versus the ones formerly sold by Tonka. "Penny Racers" tend to be garishly colored and given silly names, ignoring the actual names of the makes and models, and marketed for US children, whereas the Choro Q in the far East are made to a much higher quality standard and many are specifically designed for the adult collector, with high detail and/or tiny, incredibly detailed racing graphics and occasionally other realistic gimmicks such as fold-out headlights.

Originally produced in Japan, the manufacture subsequently has occurred variously in Taiwan, Macau and China. The models represent various makes and models of all kinds of actual cars, trucks, trains, and even planes and military and construction vehicles. There are even versions representing just about every bus and train line in Japan. Choro-Q are also produced in limited special runs for promotional purposes. Models are licensed and produced for automotive manufacturers and dealers, or as tchotchkes for marketing of other products and services. They even released a Major League Baseball line.

The first Choro-Q cars were more geared toward children, with primary colors and low detail. They have grown more sophisticated over time and now are for the most part cast in a uniform clear, colored or smoked resin plastic which is then painted, thus leaving the windshields and headlights, etc. transparent for added realism. From early on, Takara offered accessories and various spare parts and modification parts, including different motors to give a higher speed. Recently the newer Choro-Q are sold from the factory with various styles of spring-wound motors, including slow (for trucks and machinery), normal (for normal cars), and fast (for sports cars). There is even a 2-speed motor that starts out slow and then shifts to a higher gear.

Unusual Choro-Q which have the wheels and pull-back motor but are not modelled after vehicles are also common, often sold as special collectibles. This includes Choro-Q in the shape of common regional symbols such as carved wood bears of Hokkaido and popular symbols from other regions such monkeys, salmon eggs, sea urchin, etc. sold only in certain regions and marketed at local domestic tourists.

The Choro-Q brand has been extended, often with a small name change which is a pun on the original name, to cover other small toys or novelties, both with and without the wheels and motor, including

Dozens of Choro Q video games using the Choro-Q brand and themes have been released. These games, which have been released on many platforms, are racing genre with varying customization and RPG elements. Many of the games have been ported and translated with moderate success internationally, sometimes under the Choro-Q name, but also under other names such as Penny Racers, Gadget Racers and Road Trip.