In graph theory, the Robertson–Seymour theorem (also called the graph minor theorem[1]) states that the undirected graphs, partially ordered by the graph minor relationship, form a well-quasi-ordering.[2] Equivalently, every family of graphs that is closed under minors can be defined by a finite set of forbidden minors, in the same way that Wagner's theorem characterizes the planar graphs as being the graphs that do not have the complete graph K5 and the complete bipartite graph K3,3 as minors.

The Robertson–Seymour theorem is named after mathematicians Neil Robertson and Paul D. Seymour, who proved it in a series of twenty papers spanning over 500 pages from 1983 to 2004.[3] Before its proof, the statement of the theorem was known as Wagner's conjecture after the German mathematician Klaus Wagner, although Wagner said he never conjectured it.[4]

A weaker result for trees is implied by Kruskal's tree theorem, which was conjectured in 1937 by Andrew Vázsonyi and proved in 1960 independently by Joseph Kruskal and S. Tarkowski.[5]

A minor of an undirected graph G is any graph that may be obtained from G by a sequence of zero or more contractions of edges of G and deletions of edges and vertices of G. The minor relationship forms a partial order on the set of all distinct finite undirected graphs, as it obeys the three axioms of partial orders: it is reflexive (every graph is a minor of itself), transitive (a minor of a minor of G is itself a minor of G), and antisymmetric (if two graphs G and H are minors of each other, then they must be isomorphic). However, if graphs that are isomorphic may nonetheless be considered as distinct objects, then the minor ordering on graphs forms a preorder, a relation that is reflexive and transitive but not necessarily antisymmetric.[6]

A preorder is said to form a well-quasi-ordering if it contains neither an infinite descending chain nor an infinite antichain.[7] For instance, the usual ordering on the non-negative integers is a well-quasi-ordering, but the same ordering on the set of all integers is not, because it contains the infinite descending chain 0, −1, −2, −3...

The Robertson–Seymour theorem states that finite undirected graphs and graph minors form a well-quasi-ordering. It is obvious that the graph minor relationship does not contain any infinite descending chain, because each contraction or deletion reduces the number of edges and vertices of the graph (a non-negative integer).[8] The nontrivial part of the theorem is that there are no infinite antichains, infinite sets of graphs that are all unrelated to each other by the minor ordering. If S is a set of graphs, and M is a subset of S containing one representative graph for each equivalence class of minimal elements (graphs that belong to S but for which no proper minor belongs to S), then M forms an antichain; therefore, an equivalent way of stating the theorem is that, in any infinite set S of graphs, there must be only a finite number of non-isomorphic minimal elements.

A family F of graphs is said to be closed under the operation of taking minors if every minor of a graph in F also belongs to F. If F is a minor-closed family, then let S be the set of graphs that are not in F (the complement of F). According to the Robertson–Seymour theorem, there exists a finite set H of minimal elements in S. These minimal elements form a forbidden graph characterization of F: the graphs in F are exactly the graphs that do not have any graph in H as a minor.[9] The members of H are called the excluded minors (or forbidden minors, or minor-minimal obstructions) for the family F.

The following sets of finite graphs are minor-closed, and therefore (by the Robertson–Seymour theorem) have forbidden minor characterizations: 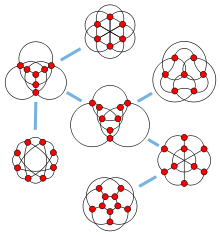 The Petersen family, the obstruction set for linkless embedding.

Some examples of finite obstruction sets were already known for specific classes of graphs before the Robertson–Seymour theorem was proved. For example, the obstruction for the set of all forests is the loop graph (or, if one restricts to simple graphs, the cycle with three vertices). This means that a graph is a forest if and only if none of its minors is the loop (or, the cycle with three vertices, respectively). The sole obstruction for the set of paths is the tree with four vertices, one of which has degree 3. In these cases, the obstruction set contains a single element, but in general this is not the case. Wagner's theorem states that a graph is planar if and only if it has neither K5 nor K3,3 as a minor. In other words, the set {K5, K3,3} is an obstruction set for the set of all planar graphs, and in fact the unique minimal obstruction set. A similar theorem states that K4 and K2,3 are the forbidden minors for the set of outerplanar graphs.

Although the Robertson–Seymour theorem extends these results to arbitrary minor-closed graph families, it is not a complete substitute for these results, because it does not provide an explicit description of the obstruction set for any family. For example, it tells us that the set of toroidal graphs has a finite obstruction set, but it does not provide any such set. The complete set of forbidden minors for toroidal graphs remains unknown, but contains at least 16000 graphs.[11]

The Robertson–Seymour theorem has an important consequence in computational complexity, due to the proof by Robertson and Seymour that, for each fixed graph G, there is a polynomial time algorithm for testing whether larger graphs have G as a minor. The running time of this algorithm can be expressed as a cubic polynomial in the size of the larger graph (although there is a constant factor in this polynomial that depends superpolynomially on the size of G). As a result, for every minor-closed family F, there is polynomial time algorithm for testing whether a graph belongs to F: simply check, for each of the forbidden minors for F, whether the given graph contains that forbidden minor.[12]

However, this method requires a specific finite obstruction set to work, and the theorem does not provide one. The theorem proves that such a finite obstruction set exists, and therefore the problem is polynomial because of the above algorithm. However, the algorithm can be used in practice only if such a finite obstruction set is provided. As a result, the theorem proves that the problem can be solved in polynomial time, but does not provide a concrete polynomial-time algorithm for solving it. Such proofs of polynomiality are non-constructive: they prove polynomiality of problems without providing an explicit polynomial-time algorithm.[13] In many specific cases, checking whether a graph is in a given minor-closed family can be done more efficiently: for example, checking whether a graph is planar can be done in linear time.

For graph invariants with the property that, for each k, the graphs with invariant at most k are minor-closed, the same method applies. For instance, by this result, treewidth, branchwidth, and pathwidth, vertex cover, and the minimum genus of an embedding are all amenable to this approach, and for any fixed k there is a polynomial time algorithm for testing whether these invariants are at most k, in which the exponent in the running time of the algorithm does not depend on k. A problem with this property, that it can be solved in polynomial time for any fixed k with an exponent that does not depend on k, is known as fixed-parameter tractable.

However, this method does not directly provide a single fixed-parameter-tractable algorithm for computing the parameter value for a given graph with unknown k, because of the difficulty of determining the set of forbidden minors. Additionally, the large constant factors involved in these results make them highly impractical. Therefore, the development of explicit fixed-parameter algorithms for these problems, with improved dependence on k, has continued to be an important line of research.

Friedman, Robertson & Seymour (1987) showed that the following theorem exhibits the independence phenomenon by being unprovable in various formal systems that are much stronger than Peano arithmetic, yet being provable in systems much weaker than ZFC:

Theorem: For every positive integer n, there is an integer m so large that if G1, ..., Gm is a sequence of finite undirected graphs,
where each Gi has size at most n+i, then Gj ≤ Gk for some j < k.

(Here, the size of a graph is the total number of its nodes and edges, and ≤ denotes the minor ordering.)